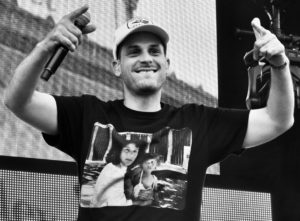 I had the pleasure of interviewing Evidence before his performance at Soundset 2018. I was excited to speak to him because he’s one of my favorite people to talk to in Hip-Hop. He’s always cordial and cracking jokes. On top of that, his album, Weather or Not, is my favorite album of the year. Like always with Ev, the beats on the album were hard, but he went to a different place with the lyrics this time around.

Weather or Not gives us a more introspective Evidence. The highlight of the album is a song chronicling his wife’s battle with breast cancer called, “By My Side Too.” I asked Evidence about the song and unbeknownst to me his wife recently lost her battle with cancer.

Evidence’s response to my question was motivational, and I’m sure his words will touch others who are trying to pick up the pieces after losing a loved one. It’s bigger than Hip-Hop…

TRHH: What does it mean to you to perform at Soundset 2018?

Evidence: It’s an honor. I’ve been performing here since the first year it happened so to be doing it this many years is an honor.

TRHH: Is there anyone that you’re excited to see as a fan?

TRHH: [Laughs] That’s funny. I thought you were going to say Jaden Smith.

Evidence: He did that.

TRHH: For my money ‘Weather or Not’ is the best album of the year. Are you pleased with the reception its received?

Evidence: I am. From the reviews, to the sales, the love on the videos, the shows I’ve been doing, and the way it’s been received, I could always ask for more but I’m grateful for what I’ve got.

TRHH: All of the videos for the album have been super dope. “Powder Cocaine” stands out to me. How did you come up with the concept for the video?

Evidence: The video is like a commercial that was done a long time ago. It was like a Sony Bravia commercial or something. They were bouncing all these balls. That was dope. So, we took pieces of that video – straight jacked it – and mixed it with our own footage of fucking re-doing the balls. It was like we sampled the video so to speak. We cut it in with ours and it’s hard to tell the difference. We did really good. We had Siddiq, the owner of Rhymesayers and all these people with big nets running around the street collecting balls. It was fun to put the actual staff to work [laughs]. There was a Stairway to Heaven type thing at the end, which was cool.

TRHH: The song “By My Side Too” is real heavy. Did you have any apprehension about sharing that part of your life with the world?

Evidence: Yeah, I did. I wrote it for me as therapy and I shared it with her and she said she would want people to hear what she was going through. I’m not loving that song right now because you know, she passed.

Evidence: Yeah. About a month and a half ago.

Evidence: Thank you. It’s been very hard. It doesn’t mean what I wanted it to, so it’s kind of a sore spot for me right now. I’m a full-time dad right now, so I’m readjusting and trying to figure out how I’m going to move forward. Curling up in a ball and being weak – I just can’t do that right now. I’ve got too much that I have to be strong for so I’m choosing to find strength in weird places and keep pushing.

Purchase: Evidence – Weather or Not

Sherron Shabazz is a freelance writer with an intense passion for Hip-Hop culture. Sherron is your quintessential Hip-Hop snob, seeking to advance the future of the culture while fondly remembering its past.
View all posts by Sherron Shabazz →
This entry was posted in interview and tagged 2018, By My Side Too, California, Dilated Peoples, Evidence, interview, Live from Soundset, Los Angeles, Powder Cocaine, Rhymesayers, Soundset, Soundset Festival, Step Brothers, Weather or Not. Bookmark the permalink.