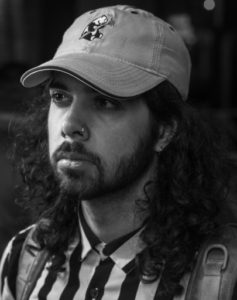 Spencer Joles is a multi-talented artist from South Minneapolis, Minnesota. Joles is a director, writer, singer, emcee, and a producer. In late 2017 Joles and his partner-in-rhyme Nazeem released their sophomore album, Years of Obscurity. The album was produced entirely by Joles and caught the attention of the organizers of Minnesota’s annual Hip-Hop festival, Soundset.

Spencer Joles put his production skills on display at the 2018 Soundset Festival, taking part in the Last of the Record Buyers Production Showcase, wowing concertgoers with his energetic and eclectic soundscapes. Following his Soundset performance Joles spoke to The Real Hip-Hop about his album alongside Nazeem, Years of Obscurity, the Minneapolis Hip-Hop scene, and what it means to perform at Soundset.

TRHH: What does it mean to you to perform at Soundset 2018?

Spencer Joles: It’s a great opportunity and it’s like hugest festival for Hip-Hop in Minnesota so it’s great to represent myself among the community and all the other great artists.

TRHH: Is there anyone that you’re excited to see as a fan?

Spencer Joles: It’s very weird. It’s very cool because there’s a bunch of different little sectors of Hip-Hop. You have your Rhymesayers cats and the sound that they’ve developed, you have other new acts that are doing something that I feel hasn’t been done as much here – making the kind of nation-wide mainstream music, and then the people in between. I feel like that’s where I fall into – the weirdos making all of the obscure stuff.

TRHH: The ‘Thug Tears’ video from Years of Obscurity was so dope. How did you come up with the concept and how cold was it that day?

Spencer Joles: Thank you. It was really cold. The funny thing was, there wasn’t any snow on the ground a little bit before that and randomly there was this blizzard. We were like, “This is insane. We should go out and shoot some stuff for ‘Thug Tears’.” I basically had some inspiration from Wes Anderson with the symmetry. I wanted to lock the camera, keep it in place and have it be like a 16mm film vibe.

TRHH: Is there a more rewarding art for you between producing, emceeing, and film?

Spencer Joles: I say they’re rewarding in different ways. Writing lyrics, singing, and rapping is very rewarding in the sense that the release and the catharsis of getting all of the feelings out on paper and out there for the world to see and having those words that connect with people is really cool. You have beats too where somethings you can’t put the words to feeling and that’s the perfect outlet for that. For film it’s such a crazy medium because I don’t think there is any medium that captures time as well as film, and that’s cool because that’s such an important pivotal part of our lives is time and the chronology of things and how that fits into place.

TRHH: How do you feel the people were received your performance and your beats today?

Spencer Joles: It was much better than I expected, honestly. I don’t do producer sets ever. It was kind of weird. I don’t even have any equipment to do it so I was just doing it off of Logic on my laptop. It turned out a lot better than I thought. People vibed with it and that was cool.

TRHH: Are there plans for you to drop a solo album?

Spencer Joles: I’d like to. I definitely have been conceptualizing a lot for a solo album. If I were to do a solo album it would probably be some more singer/songwriter shit but with beats. I’ve done a lot of shit on guitar and singing, but I’d like to do some R&B/Soul fusion stuff. I have a lot of stuff that I did like that, but right now I’m kind of focusing on me and Nazeem’s stuff.

TRHH: What’s next? Is there a follow-up project?

Spencer Joles: Basically, the Years of Obscurity trilogy. We have the second EP coming out probably in spring. We’ve been working really hard on that and I think it’s a sound that nobody has ever heard before. I know that’s a bold statement. Whether people like or not, I don’t know. I just know that it’s very different and it was awesome and fun to make because it was such an adventurous step. It was more not really caring about sounding like a specific thing and just playing around with the process of making it and recording it. It’s going to be great because usually our stuff is really hard, intense, and wordy and it’s like that but it’s more applicable to more areas of life. It’s more emotional and a more personal album. I think this is the most emotional Hip-Hop record that I’ve ever made and maybe to come out of Minnesota.

Sherron Shabazz is a freelance writer with an intense passion for Hip-Hop culture. Sherron is your quintessential Hip-Hop snob, seeking to advance the future of the culture while fondly remembering its past.
View all posts by Sherron Shabazz →
This entry was posted in interview and tagged 2018, interview, Live from Soundset, Minneapolis, Minnesota, Nazeem and Spencer Joles, Rhymesayers, Soundset, Soundset Festival, Spencer Joles, Thug Tears, Years of Obscurity. Bookmark the permalink.