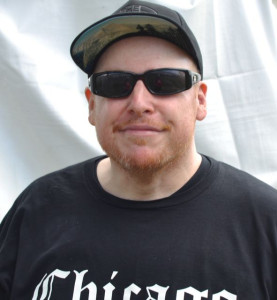 The first element of Hip-Hop is deejaying and it is without question essential for the culture. From the day that DJ Kool Herc created Hip-Hop until today the DJ has consistently been the backbone of the culture. DJ’s break new artists, support emcees at live shows, and rock parties throughout the globe.

As part of the 2016 Soundset Festival a tent was erected and called “Essential Elements.” The tent featured an assortment of DJ’s that were not just your average DJ’s; they are trailblazers, award winners, and legends. Shannon Blowtorch, Skeme Richards, Jazzy Joyce, Crazy Legs, Marley Marl, and Jesse De La Pena took turns rocking the turntables at Soundset’s Essential Elements tent.

Jesse De La Pena is a Chicago music icon. While deejaying is his first love De La Pena wears many hats. In his thirty-plus year career he’s been a promoter, producer, music curator for Vocalo Radio, and a Grammy nominated musician.

The Real Hip-Hop got the opportunity to talk to Jesse De La Pena following his raucous set at Soundset 2016.

TRHH: How’s it feel to be performing here at Soundset?

Jesse De La Pena: It’s pretty awesome. I’m a big fan of Hip-Hop – been into it almost all my life, since a kid back in the 80s. The fact that I was able to come out here, play, and do what I do for a younger crowd, an older crowd, B-Boys, a little bit of everybody, it was just a good energy to get out of town and see how Minneapolis does it. I’ve been hearing about it for almost ten years. It was great to be a part of it – a lot of great energy.

TRHH: How did you feel about your set? The people started breakin’ at some point.

Jesse De La Pena: Yeah, the original idea was that I was going to play a B-Boy set but early there were no breakers. I decided to make it a party set, but toward the end they came around and got into it. I had to kind of adjust the set but as long as you kept it fun and up-tempo, and get the girls to start dancing. We can hit the B-Boys but we gotta get everybody into it. It was a lot of fun.

TRHH: Do you have a sure shot go-to record for events like this?

Jesse De La Pena: For this, not at all. All logic is out the window. What you think is gonna work most of the time you’re scratching your head because it’s getting younger and younger every year. We’re getting older and older. I don’t do this as a club DJ as much. I’m not out in the clubs on weekends and everything. I do it occasionally. I still keep some residencies but even then it’s kind of a niche market. I’m able to do what I do but I can still cater on the weekends a little bit, but the game has changed with trap and bass. It’s cool, I can pick out elements that I like and segue. I’ll give them this, then I’m gonna go back and do me. You kind of go back and forth. Having an emcee with me like Dirty [MF] is good because he can dictate to them and verbalize what I’m trying to do and kind of walk them through what it is.

TRHH: What’s your opinion of how Serato has changed the game for DJ’s?

Jesse De La Pena: I am on Serato. I’ve been since 05-06. I think it’s elevated the game to a situation where you have more options and you can get more creative. There’s a lot of great positives. But then it has got it down to where the investment to be a DJ is not as much. You don’t have to invest in a record collection; you can just get a hard drive from your boy. There is good and bad in it. If you’re a creative person you will soar and be more creative. If you’re just kind of in it because it’s the trendy thing to do I would just encourage people to also start digging for records. Don’t abandon digital but know both of them. I’m glad I started with the analog stuff.

TRHH: What’s your take on the changes that the Hip-Hop scene in Chicago has had?

Jesse De La Pena: I’m not nearly as involved in it as I was. I work in radio and I hear what’s coming out and even in that I kind of pick and choose. I don’t know if I’m a good person to speak on it because I’m not as involved in it. Back in the late 80s and 90s I was really in it. We had our Blue Groove Lounge every Monday night with weekly Hip-Hop. We were booking artists that were coming out, local, and international artists. Now I see things that I like that I can kind of tolerate. I can pick out the stuff that I can deal with. A lot of the stuff I can’t deal with, maybe it’s an age thing, maybe it’s a drug thing, or a gang bang thing. A lot of that stuff that the kids are into, and I don’t wanna sound like an old man, but I can’t really vibe to it. It doesn’t speak to me.

TRHH: Tell me about the Friday Night DJ Series.

Jesse De La Pena: It’s a series with Vocalo Radio. We’re the sister station of WBEZ, it’s the NPR affiliate. I’ve been doing that show for about five years. They originally had a Friday mix show but when I came in and they asked me to take over I just reached out to friends of mine that were touring – maybe international guys that were coming through town but had that local element, too. The show is built where it kind of represents a lot of different things. We put together a DJ collective; we had a competition to find some of the best DJ’s in the Midwest. Kid Cut Up is down with us, Big Once, Pumpin Pete, one of Chicago’s first Hip-Hop DJ’s. And then we got electronic guys like Jeremy Sole on the west coast. The idea is to really push further than regular radio stuff. There’s a lot of music out there that people will never hear and these DJ’s are one’s that are pushing envelopes and being more creative overall. So that’s what the Friday Night DJ Series is. It’s an avenue of six hours of DJ sets where we focus on just good music. No rules, it’s an open format. We’re really trying to focus on the up and comer and whoever is in town we’ll try to reach so it’s a balance – worldwide, you know.

Jesse De La Pena: I really wanna get back to doing music – production and beats and stuff. It’s been a while. I’ve been gathering stuff but it’s just a time thing as you get older and have a family and all of that stuff. I’m trying to get back to it. I’m dusting off my MPC so hopefully I’ll get back to doing some music – I’d be happy with that. I’m really just trying to get out of town more – this is perfect. It’s been a while since I’ve been out. I go out to L.A. and New York but I’m trying to go more Midwest – Kansas City, St. Louis, and Milwaukee. All those places that I used to play I’m trying to reconnect with people and kind of let them know what I’m doing nowadays. I’m happy to be a part of this — I’m really honored.

Sherron Shabazz is a freelance writer with an intense passion for Hip-Hop culture. Sherron is your quintessential Hip-Hop snob, seeking to advance the future of the culture while fondly remembering its past.
View all posts by Sherron Shabazz →
This entry was posted in interview and tagged Chicago, DJ, interview, Jesse De Le Pena, Minneapolis, Minnesota, Rhymesayers, Soundset, Soundset Festival. Bookmark the permalink.