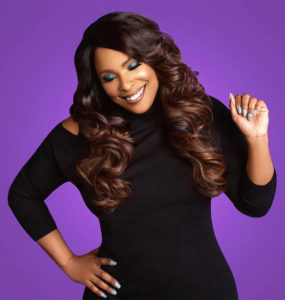 The legendary DJ Spinderella headlined the Essential Elements stage at the 2019 Soundset festival. It was only right that a DJ of her caliber be selected to shut down that particular stage. For over 30 years Spin has been providing sounds to make us move as the DJ for Salt-N-Pepa and on her own.

The Real Hip-Hop had the pleasure of chatting with Spinderella at Soundset. She spoke about her Soundset performance, her split from Salt-N-Pepa, taking part in the BET reality show, Ladies Night, and developing her very own DJ academy.

TRHH: What does it mean to you to perform at Soundset?

Spinderella: This is everything. I haven’t been here. Every year I’m like, “Yo, that lineup is dope!” so when I got the call this time I was like, “Hell yeah!” I’m excited.

TRHH: Is there anyone that you’re excited to see perform just as a fan?

Spinderella: Unfortunately, I’m not going to be able to see Black Star because we’re on stage at the same time. I saw DMX, SZA, Lil’ Wayne later, I heard they added DaBaby. Before I prepare for my set I’m going to go to the stage and see who’s getting on and try to enjoy it.

TRHH: How is it different deejaying at a festival versus in a club?

Spinderella: Let me tell you about festivals, this is what I want to do. Festivals are just so fun and laid back. It’s dirty, it’s rustic, it’s gritty. You can’t be cute up in here. I mean, you can try. I love it. The energy of the crowd is everything.

TRHH: What was your experience like filming the show Ladies Night?

Spinderella: Ladies Night. It was an experience. A lot of things transpired with it that had to happen. I got really connected with SWV. I got to know them and enjoyed our time there. The whole Salt-N-Pepa thing with Spinderella is over and I gotta say, I’m happy.

TRHH: What makes you happy about that situation?

Spinderella: Because it’s a new chapter in my life. I’m excited to be embarking on it.

TRHH: Did filming the show make tensions between you guys worse?

Spinderella: No. It’s been what it’s been. I’m not going to say it’s always been bad. We’ve had some awesome times and great memories have been made. The time to be over is what it is right now.

Spinderella: Yeah, people are connected to what they’re used to. It’s like heartbreaking. It’s like losing someone or the end of an era. No one really likes change. Change is hard. We grew up with a lot of our peers and a lot of them took it kind of hard. All I can say is, like with anything there’s a new day. You get past it, you get through it, you move on, and you get better. You evolve.

TRHH: Playing a festival like this you have a diverse crowd. How do you plan out what you’re going to play? Or do you just go with the feel of the crowd?

Spinderella: It depends. I have sets for everything. I can play this, that, that, or the other. The vibe I’m getting in the Essential Elements tent is that old school classic vibe. I feel like they want that. There are a lot of Hip-Hop B-Boys and B-Girls and I’m going to play to that. I’m just going to kind of join those forces together musically.

TRHH: What’s next up for Spinderella?

Spinderella: I’m working on a DJ academy and a little bit of a tour. I’m going to be in some cities empowering young people who want to deejay. It will be deejaying 101 and whatever else they’re dealing with – career, family, getting passed things, and motivating. We’re putting it all together now and I’m looking forward to it.

Sherron Shabazz is a freelance writer with an intense passion for Hip-Hop culture. Sherron is your quintessential Hip-Hop snob, seeking to advance the future of the culture while fondly remembering its past.
View all posts by Sherron Shabazz →
This entry was posted in interview and tagged DJ, DJ Spinderella, Ladies Night, Minneapolis, Minnesota, New York, Salt-N-Pepa, Soundsest festival, Soundset, Spinderella. Bookmark the permalink.