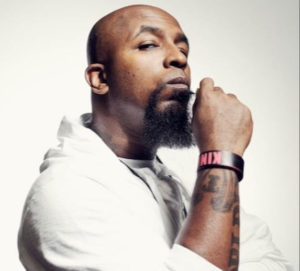 Tech N9ne is the hardest working man in Hip-Hop. He continually tours while finding the time to create new music all while running his Strange Music record label. Tech’s latest venture is a partnership with Boulevard Brewing Co. for a wheat beer mixed with pineapple and coconut called, Bou Lou.

Tech is also in the middle of the It Goes Up tour that has him crisscrossing the nation. Tech N9ne stopped in the middle of his headlining tour to perform as part of the 2019 Soundset festival. In the most raucous performance of the day, Tech N9ne rocked the Soundset faithful and left them wanting more.

The Real Hip-Hop spoke to Tech N9ne about his Soundset performance, his start in the beer business, his future in film making, and when he plans to take a step back from the game of rap.

TRHH: What does it mean to you to perform at Soundset again?

Tech N9ne: Everything. I should have been here every year. I’m kind of pissed off about it. I didn’t know that they had done twelve of them! I only done two out of twelve! I’m supposed to be here all the time. This is where I belong!

TRHH: How do you feel your set went? You had the biggest crowd at that stage the entire day.

Tech N9ne: [Laughs] I didn’t know that. When I went out there I had no idea what I was going to see. It was people for days. Next year they probably need to put speakers and screens back there too. That was way back, man.

TRHH: You brought ‘em in, bro.

TRHH: Is there anyone that you’ve gotten to see perform as a fan?

Tech N9ne: Beast Coast. It was good to see Joey Bada$$, Nyck Caution, Flatbush, everybody. It was wonderful, man.

TRHH: Who came up with the concept for the Kathartic series?

Tech N9ne: Me. I came up with it while I was in Europe. We did 28 shows in Europe. I wrote it over there and sent it to my video crew. I wrote one through five. The fifth one is coming soon. That’s the season finale. I’m writing six through nine right now, you know what I’m sizzling. I’ve been in my screen-writing app. I’ve been working with it for a while. I’m writing all this shit, all the dialogue, everything.

TRHH: Do you want to take it to a movie level?

Tech N9ne: That’s what I’ve been doing. I started with Brightfall. We didn’t get to pan that one out. I had a whole story for that. I might still do it, I don’t know. Kathartic was my new baby. I’m still writing it. It’s been working. The first one, people won’t get to see it unless they come to my new show. People are like, “Okay, ‘Like I Ain’t’ is episode 2, where is episode 1?” You have to come to my show to see it. Episode 2 is already at seven-something million and the other ones are at a million or better. Easier for You, Disparagement, all of them are coming together. That means my work of art is working. It makes me feel good.

TRHH: The song Like I Ain’t sounds like you feel as though you don’t get the respect you deserve. Is that a fair assessment?

Tech N9ne: That’s exactly what it is. It was my way of popping my collar and making the newcomers aware of what I’ve done over the years – The song with 2Pac, touring with Kendrick and Jay Rock, T.I., everything. Everything is in there. Not quite everything. The Slipknot thing is in there. I just had to douse people. Don’t act like y’all don’t know. I’m rapping like I ain’t do none of this. I’m trying to do it all. I’m still rapping like I’m hungry. Like I never ate. I’m famished.

TRHH: The new song Easier for You (EF U) tackles suicide from a different view. What inspired you to write that song?

Tech N9ne: The people who used to hit me in my phone saying, “I’m ready to leave, Tech. Thank you for everything you’ve done for me. I think I’m ready to go.” I don’t like that shit. Because it’s so selfish that you think it’s easier for you to die and kill yourself. Taking yourself away makes it hard as fuck for us – the people that love you.

TRHH: That’s true, but people say that you shouldn’t say that to them.

Tech N9ne: That’s the problem. You have to be careful with mental illness. You have to be careful with people who are unstable, but at the same time, with the ones you love you have to let them know you love them, let them know that they’re selfish as fuck, and let them see the other side of the hurt before they do something stupid like that. I felt like it was time to say something to the people that have those families. A lot of people may feel like their family doesn’t love them until they kill themselves and then their family is devastated.

TRHH: I agree with you. All of the experts say you shouldn’t say that, but I think it’s bullshit.

Tech N9ne: The experts want you to be careful, and you should be careful. But with my little ones if they’re talking that shit I have to be harder on them. You are a queen! What does that say about the people who raised you? Social media is enough to make you have to go in a hole. Look what they did to Kanye. Kanye said he had to go and get lipo because people were being mean.

TRHH: I always say you’re the hardest working man in Hip-Hop. You’re always releasing music, touring, and running the label. Do you ever foresee Tech N9ne slowing down?

Tech N9ne: Yes. I’ll be 48 this year. I feel like I’m 23. I used to say 22, but I’ll give myself another year [laughs]. When I turn 50 I want to just slow down. Not 250 shows a year, not three albums a year, I want time to kick it with my family. They lost so much time with me and when they get to see me is when I’m, on fucking tour. I work so much. I just want to party with my loved ones, dawg. My fans are my loved ones as well, but it’s levels to this shit. I wrote songs about The Rain in ‘06 about how I missed out on my kids, and now it’s hitting me. I gotta do something about it before I lose them. I almost did in the divorce with their momma. Shits real out here, my nig. We work for the love of them so they’ll have whatever they want, but when the time is taken away the respect level can depreciate.

TRHH: Did your children understand that you were doing this for them?

Tech N9ne: I think they do, but still, time…

TRHH: You can’t get it back.

Tech N9ne: Nah, that ain’t it. I got music in my bones and in my soul. I just want to slow down and help my artists pop like they deserve.

TRHH: How’d you get involved in Bou Lou’s beer?

Tech N9ne: I had no idea that I would ever sell beer, but, it’s here. They hit us like a year ago like, “Hey, you know that song you got called Caribou Lou that went gold and platinum?” I’m like, “Yeah.” They said, “Within those platinum people we’re fans as well and we know that pineapple and coconut go well with unfiltered wheat beer.” I’m like, “No!” They said, “Yeah!” We came down and tasted it. We put it out in five different markets and it sold out. We put it out on our tour last fall in all the venues and it did really well. When N9na came out April 19th the beer went out nationwide and they said it’s been beautiful! I’m a pup in the craft beer business. I am but a pup, but I love it.

TRHH: You’re currently out on the It Goes Up Tour; what do you have in-store for fans that come out and see the show?

Sherron Shabazz is a freelance writer with an intense passion for Hip-Hop culture. Sherron is your quintessential Hip-Hop snob, seeking to advance the future of the culture while fondly remembering its past.
View all posts by Sherron Shabazz →
This entry was posted in interview and tagged Easier For You, EF U, It Goes Up tour, Kansas City, Like I Ain’t, Minneapolis, Minnesota, MO, N9na, Soundsest festival, Soundset, Strange Music, Tech N9ne. Bookmark the permalink.