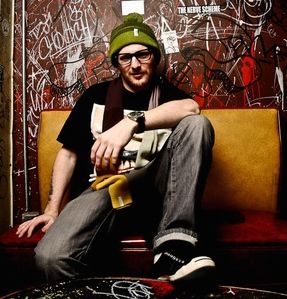 Kansas City’s own Mac Lethal hasn’t released an album since 2011’s Irish Goodbye, but he’s remained one of the busiest men in rap. Mac wears many hats as an author, DJ, producer, and owner of Black Clover Records, but is first and foremost an emcee. His latest single ‘Alphabet Insanity’ finds the rapper breaking down the alphabet in rapid fire fashion. The song was such a hit on Youtube that it caught the attention of talk show host Ellen Degeneres who invited Mac to be a guest on her show.

Lethal’s bread and butter however is the live show. His critically acclaimed performances have entertained fans all across America. The Midwest road warrior will take part in the 2014 Chalice California festival July 12-13 at the NOS Events Center in San Bernardino, California. Also performing at Chalice California are Hieroglyphics, E-40, STS9, Les Claypool’s Duo De Twang, and Supernatural among others.

The Real Hip-Hop spoke to Mac Lethal about appearing on the Ellen Degeneres Show, his upcoming solo album, and performing at this weekend’s Chalice California festival.

TRHH: What does it mean to you to perform at the 2014 Chalice California festival?

Mac Lethal: I’m excited to see new festivals birthed from positive movements. It’s 2014; everyone is doing their own thing and throwing their own, huge, awesome parties and festivals. This is another example of making our voices louder.

TRHH: Is there anyone on the bill you’re excited to see as a fan?

TRHH: What’s your opinion on Prop 215 and medical marijuana?

Mac Lethal: I don’t live in California, so I don’t know if I understand it in great detail. However, while medical marijuana is a good thing, it would be a lot smarter, less draconian, and more beneficial if we just legalized marijuana everywhere, for recreational and medicinal usage. This isn’t 1700. Let’s get serious here.

TRHH: You snapped on your latest single ‘Alphabet Insanity’. What initially inspired that song?

Mac Lethal: I have no idea. I get weird ideas out of nowhere because I’m always trying to think of something I feel hasn’t been done before — or at least in the way I want to do it. It just kind of surfaced one day and I decided to work on it. Luckily it stuck.

TRHH: What did it feel like to go on the Ellen show?

Mac Lethal: Most surreal, stressful, and rewarding experience of 2014 so far — aside from having my son with me every day, of course.

TRHH: Are you surprised at how popular “Texts from Bennett” became?

Mac Lethal: To be honest, no. The streets need Bennett. Hopefully it isn’t done getting popular –fingers crossed.

TRHH: When can we expect the next full-length Mac Lethal album?

Mac Lethal: I am working on a bunch of stuff right now, and when I feel the time is right, I will cut an album together and release it. I have never really released an album that I felt got the care and attention it deserved. I don’t mean from a record label or anything, I mean from me. I have always felt pressured by myself to hurry up and release whatever music I was working on. But I am in a good space where I want to make things as good and new as possible, and release it in a creative way. So I’m taking my time and making something really special, at least to me.

TRHH: What do you have in-store for fans at Chalice California?

Mac Lethal: I will buy anyone a beer who comes up to me during E-40’s set and tells me who won the 2014 IBJJF Worlds absolute division in Brazilian Jiu-Jitsu last year. For the record, I know the answer.

Sherron Shabazz is a freelance writer with an intense passion for Hip-Hop culture. Sherron is your quintessential Hip-Hop snob, seeking to advance the future of the culture while fondly remembering its past.
View all posts by Sherron Shabazz →
This entry was posted in interview and tagged Alphabet Insanity, Chalice California, interview, Mac Lethal, marijuana, medical marijuana, Texts From Bennett, The Ellen Degeneres Show. Bookmark the permalink.