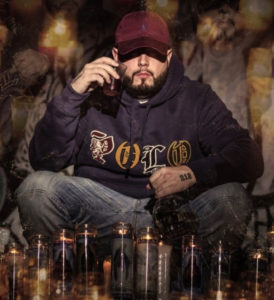 The Real Hip-Hop spoke to Madhattan about being a workaholic, why he shortened his rap name, and his new album with IceRocks, Brown Water Bible.

TRHH: What’s the meaning behind the title of the new album, Brown Water Bible?

Madhattan: My boy thought of that. I played all the songs for him early, before we even thought of putting the shit out. My boy Flac said “Bro, this sound like brown water bible verses.” I thought it sounded perfect. The whole time I was making it, I was in the studio with a bottle of D’ussé.

Madhattan: For this project or in general? ‘Cause I known IceRocks for like twenty years, man.

TRHH: In general, and how did you decide to do a full album?

Madhattan: I met IceRocks when I was like 14 or 15 years old. He came to one of my homeboy’s crib and we was all smoking weed and drinking and shit and motherfuckers just start cyphering. We’ve been cool ever since. For this project, I had taken 3 or 4 years off of rapping when I had my daughter. I was focusing on that and I tried to come back to rap so I hit Ice like, “Yo, let’s do a whole project together.” He dubbed that and was like, “Nah, I’ll give you a beat though.”

He told me to pull up to the studio. I pulled up and he played a bunch of beats for me. The one I was really feeling he told me it was for Benny. Right then and there without me telling him, in my mind I was going to get Benny on the record. I hit up Benny and met him two days after that. He came through Ice’s studio and we did the record right then and there. From then it was on. I was in Ice’s lab every week after that and we just put the whole thing together.

TRHH: What was it like working with Benny the Butcher?

Madhattan: That man’s amazing. He’s didn’t write nothing down. He made it right there, and on top of that, he dropped a bunch of jewels on me that that night. It gave me the focus and the drive to continue doing what I’m doing, and from there I just listened to his advice and I’ve been going hard with it and making moves, and things have been actually coming to fruition.

TRHH: Your verse on “Stop & Frisk” was vivid. Was it based on a true story?

Madhattan: That wasn’t a particular true story, but there are true elements in that. I took different stories and put them all together. I think Rome’s is actually a true story though. When I hit him up to do the record I didn’t even know the legal issues he was dealing with at the time. He told me that exact situation happened to him. That’s just some regular shit for a street motherfucker.

TRHH: I interviewed you maybe a year ago…

Madhattan: Yeah, and I was actually going to see Benny when you interviewed me [laughs].

Madhattan: Yeah, that was that same night. Facts.

Madhattan: I dropped the Madhattan Mayor and just left it at Madhattan. I felt like the one word sounded a little bit better. Everybody was calling me that anyway, so I just stuck with that.

TRHH: I love the feel of the song “Collection Plate” with XP and Supreme Cerebral. How did that song come together?

Madhattan: Actually, I was just sitting in the lab with Ice. He started playing samples and I was like, “Yo, that shit sounds crazy.” He put that one together. I wrote my verse right on the spot. He said, “We should get somebody else on there” so automatically I hit up Supreme Cerebral ‘cause me and him had been going back and forth on Instagram. I told him I would find a record that fit for him. I sent it over and two days later he sent me the joint. Me and Ice was just listening to it with just mine and his verses on it and thought we needed a third person. I said, “Let’s get the other west coast homie. Let’s hit XP up.” He put me on his project, so I put him on mine, and it came out perfect like that.

TRHH: Do you have a favorite song on Brown Water Bible?

Madhattan: My favorite song on Brown Water Bible probably is the outro “Curtains” or “Designer Drugs” with Camino. Those are my two favorite records on there.

TRHH: Why are they your favorites?

Madhattan: Curtains is my favorite because Ice literally sent me that beat and told me “this is the outro.” I was with my daughter so I didn’t really pay attention to the email. I listened to it for twenty seconds and I was like, “Yeah, you’re right. That’s the outro.” I wrote that like it was nothing. It was probably a ten-minute sit down to write that. It got that Dipset feel to it. I grew up listening to Dipset. It tugged on my heart strings when it came to that. It’s very nostalgic.

TRHH: You dropped a couple other projects this year, right?

Madhattan: I dropped three other projects this year. I dropped San Gennaro, which was like the first EP I dropped this year with Rob Deniro. He did all the beats. I dropped The 6th Man, which is my collab project with G4 JAG. I dropped Repercussions with NV in June. That was the last project I dropped.

TRHH: Based on dropping four projects in one year you seem like a workaholic. What’s your recording process like? How often are you in the studio?

Madhattan: I’m definitely a workaholic. I actually have another six projects in the vault right now. I record every week, two to three times a week. When I’m in the lab I try to get 2-to-3 records done. Usually if I miss a week or two I’m averaging about two to three songs a week. So, if you do the math on that, how many weeks there are in a year, I’m recording about 150 songs in a year. And I’m not slowing down. I have those six projects in the vault. I’m still going. I’m still trying to record almost every week and get as much stuff done as I possibly can.

TRHH: What’s next up for Madhattan in 2020? Will we hear all six projects next year?

Madhattan: The next project I’m dropping is a collaboration project with my boy Fastlife. That’s done already. We’re about to send it to mixing and mastering. The only problem with that is, it might conflict with one of his releases or one of my release. We might get it out in 2019, but if not, that’ll definitely come out at the top of 2020. I’m trying to at least put one out for each quarter of 2020. If not, I’ll have a couple of throwaways on the side and I’ll give those away. I’m trying to do 4-or-5 projects next year definitely though.

Sherron Shabazz is a freelance writer with an intense passion for Hip-Hop culture. Sherron is your quintessential Hip-Hop snob, seeking to advance the future of the culture while fondly remembering its past.
View all posts by Sherron Shabazz →
This entry was posted in interview and tagged Brown Water Bible, Collection Plate, Curtains, IceRocks, Madhattan, Madhattan Mayor, New York, Queens, Stop & Frisk. Bookmark the permalink.