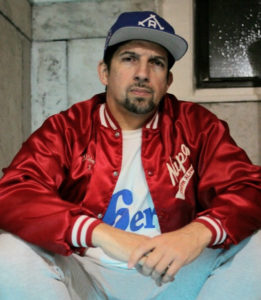 Hagler is a 6-track EP produced entirely by Saga. The project comes to us courtesy of Saga718 Records and features appearances by Fashawn and Noyz82.

The Real Hip-Hop spoke to Saga about his boxing fandom, why Hagler was his first self-produced project, and his upcoming album named after another dominant athlete, Agassi.

Saga: Hagler’s been my favorite fighter since I was a kid ‘cause my pops always used to watch Hagler fights. I think it’s like a genetic thing, man. Even as I was getting older I would watch his fights, especially the big ones against Hearns, Duran, and obviously his arch nemesis, Sugar Ray Leonard. I’ve always loved him and his style. Even outside of the ring the way he approaches life. I guess I see a parallel in my own life in a way.

TRHH: That was a golden era of boxing. Do you keep up with boxing today?

Saga: I do, I do. I do pretty closely. I’m not really hardcore about it at this point. I do know who’s who at the moment. Even in the early 2000s when De La Hoya was still fighting, the Vargas’, there was an era when Cotto was still coming up. There was an era where the welterweights were doing it big. It reminded me of the past era with Hagler and Hearns. Mayweather brought in the whole new phase of mostly defensive fighting, which a lot of fighters are now doing, like the Lomachenko’s. They’re more defense oriented than offense. Back in the day in the Hagler era it was mostly offensive fighting.

Sugar Ray was probably the first one at that period who was more of a defensive fighter. He back pedaled a lot. He fought backwards, which wasn’t a big thing. And then the Camacho’s and so on, so the era’s kind of mirrored each other a little bit in the late 90s and early 2000s, but then Mayweather kind of switched it up. You don’t see guys bang like they used to. They’re not forward fighters the way they used to be. One guy who would have done well in that time period is Pacquiao, because I think Pacquiao could bang for a small guy like he is. He would fight anybody and he’d always fight forward. I appreciate forward fighters, although I do respect dudes that are defensive oriented. It’s just a smarter way of fighting. I mean, who the fuck wants to get hit? I used to box and I didn’t like to get hit.

TRHH: The “Ratchet Alibi” teaser was dope. Did you put that together yourself?

Saga: My boy Infamous Oz is the director for most of my videos. He did it. I gave him the concept that I wanted because in the sample I use King Ghidorah, like the sound effect when he’s making his roar, and that digital ping sound that goes through it. I told him to mix Hagler clips — fighting, training, interviews and ad the vector logo to it. I kind of gave him the concept and he did an ill job. I love it.

TRHH: How would you compare Hagler to your last release, Molotov?

Saga: Because Molotv is more of a team effort, it was me and Thelonius, you compromise a little bit on the direction. Hagler is fully my vision, because it’s kind of a warm up because I have another project for the end of January/early February called “Agassi.” It’s kind of in the same vein as Hagler. I took another superstar athlete who was kind of controversial in his field of expertise. I took it and I ran with that as my full LP project. It’s different because it’s fully my vision of what I want my sound to be.

TRHH: You’re an emcee as well as a producer; do you prefer one element over the other?

Saga: I’m originally an emcee. I’ve been rapping for a long time. I’ve been working with a lot of people over the years. I always dabbled in making beats more or less. It’s part of the creative process. You’ve got to push yourself to have an overall vision. I started making beats and fucking around. I started sending them to my people like Marco Polo and a bunch of other kids in my crew and asked what they thought of them and they were like “Yo, this is fuckin’ heat!” It’s funny, I eventually just came into my own after doing it all these years. I kind of think my sound is original for what I do and I think it works with me. It might not always work with other people, but it works with me and the sound that I do.

With my voice and my delivery, it makes it real easy for me to do. Sometimes you rap with other people’s beats and it takes you out of your comfort zone, which is a good thing too, because you get to experiment a little bit. But when you really want to ride your pocket and have fun, it’s a much more fun process. It’s easier and I enjoy it more when I’m producing. I can make a beat and rap on it and if I don’t like it, after a day or two I can swap things out. I can make loops, chop things up, and do all types of different shit. I can have a bass player come in and play the bass line and it can already be existing. I’m letting my lyrics do the driving, more than the beats.

Saga: Now I use an MPC 3000 and Logic. That’s basically the two main items. Sometimes I’ll use the keys in Logic for bass lines. I haven’t incorporated any outside musicians yet or cuts from DJ’s. One of my ideas is to kind of ramp up. I start with Hagler which is straight forward with poetic spitter verses as opposed to more meaningful substantive rhymes. There’s not a lot of substance in it. It was just meant to be a warm-up or an appetizer and then the next project has a little bit more. I don’t want to hit people with too much at once, but then I’ll start ramping up and I’ll add more musicians and some DJ’s in the future.

TRHH: Do you have a favorite joint on Hagler?

Saga: I have to say Redacted. The Phil Collins joint “In the Air Tonight” you know how it starts real quiet and soft and then it switches up? It’s got this giant crescendo and climax right in the middle of it where the drums kick in. it’s kind of like that idea, which that joint is classic to me. It will forever be a classic joint. I didn’t make it with the intention of that, but it wound up being that after I listened to it for a while. The rest of them are kind of consistent. Ratchet Alibi is probably my second favorite song on the joint. I think it’s kind of strange enough, but familiar enough in a way. It’s a good mix of both elements – being a little bit weird and off, but still boom bap. Some real shit for the sake of it.

TRHH: You mentioned Agassi, what all do you have on deck for 2020?

Saga: I have this Agassi project. It’s a 12-song LP produced all by myself. It’s a little more diverse in the sound. It’s all boom bap, but it’s got no drums, some drums, it’s got some slower songs, a little bit up tempo, it’s got stories on it, so it’s more dynamic than Hagler. I’ve got another project with DJ Skizz, which is almost done. We’re in the middle of the mixing stuff. That’s called “We Don’t Believe You.” It’s another EP. It’s about eight songs. We’re thinking of that for early spring. Between that release and the New Year, I’ll probably knock out another LP or EP.

I’m looking at another couple producers that I want to hit up. I don’t want to name any names right now because nothing is confirmed. There’s two other producers that I’m looking to work with that are really dope that I want to do projects with. We might do an LP or an EP. These things have to form organically. You start with an EP and that shit just keeps going and winds up being an LP. We’ll probably have another project for myself after Agassi, DJ Skizz, and another one or two producers. Next year I’m trying to go extra! I’m trying to keep something coming out every quarter.

Sherron Shabazz is a freelance writer with an intense passion for Hip-Hop culture. Sherron is your quintessential Hip-Hop snob, seeking to advance the future of the culture while fondly remembering its past.
View all posts by Sherron Shabazz →
This entry was posted in interview and tagged Agassi, Brooklyn, EP, Hagler, interview, Molotov, New York, Ratchet Alibi, Redacted, Saga. Bookmark the permalink.