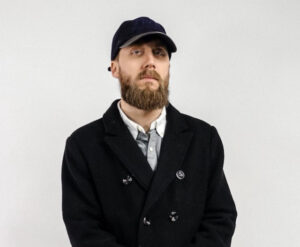 After collaborating on projects and making beats for other artists, producer Nef decided to release his own full-length album. The title of Nef’s album is the Latin term “Tabula Rasa.” Merriam-Webster defines tabula rasa as “something existing in its original pristine state.” Tabula Rasa is a 17-track released produced, mixed, and mastered by Nef.

The Real Hip-Hop spoke to Nef about his transition from deejaying to producing, the circumstances that led him to sobriety, and his new album Tabula Rasa.

TRHH: What’s the meaning behind the title of the album Tabula Rasa?

TRHH: I’m interested in you getting sober so young. What prompted you to make such a big change at that young stage of your life?

Nef: For me it was a lot of outside stuff going on. I started getting in trouble with the law when I was 12-13 years old. I came from a small town in New Hampshire right outside of Boston and there was not much to do. So, you start doing drugs early or you find something to do. I didn’t find anything to do. I got caught up in the wrong crowd. I was drinking every day and getting caught up with the law. The last time that I drank any alcohol I blacked out in a stolen car in another state about to hit a tree going 100 miles an hour. I woke up and I crawled out of that car while it was on fire. That’s a prime example of what life was at that time. It was a really dark time in my life and I was just wildin’ out. I had to change or it was drugs, death, or institutions for me.

Nef: I was like the model prisoner. I did some time. I was exactly what the system hoped. I was what all these judges, cops, and prosecutors wished they saw all the time, but they never saw. When I had my last case, I ended up walking in that courtroom with all these charges thinking I was going to go away, and I walked out of there a changed man, a member of AA, and a member of society. Everybody gave me a whole speech about that being what they hoped to see in their whole career and they hadn’t. I definitely did a full 360, that’s for sure.

TRHH: What was the process like for you to complete Tabula Rasa with so many guest features?

Nef: it was definitely a big process. Originally, I started thinking it was going to be a 10-track joint. Just a little bit of an EP to get something out. I had an EP with Ren Thomas, a couple joints with Dirty Sanchez, Term, a couple of different placements, but I hadn’t taken control and done my own thing where I was getting people on my stuff. I’ve been in New York for about 4 years. The first year I was just quiet and I soaked everything in. I was just a student, so, that was my mindset. I was just going to shut up and listen. I was around Statik and Term every day in these crazy rooms, studios, and parties just learning about the industry and how to move around in the city. The second year I started networking and the third year was when I started on my stuff.

I was at a Q-Tip party with the whole Show Off crew. I saw Fame outside and he was like, “Yo Nef, what you working on, bro?” I told him a couple of collab things and he was like, “Nah, what you working on? I wanna give ‘em something that you got.” I was like, “All right, the time is now.” If Lil’ Fame is asking me, that means it’s time to do this. That’s really how it started. At first it was like, “I’ve got to chase all these dudes down for features.” My boy UFO Fev was like, “Yo Nef, just do it with the homies.” And he was right because I have so much talent surrounding me and it just became natural after that. Term opened up Time is Money and it just became a lot easier to work with people in person, there was a couple of things through e-mail. That was another thing too, quarantine. I was super laser focused during lockdown and I just started planning and writing stuff down and 17 tracks later it was finished.

TRHH: The single “Move Different” seemed a little different from most of the songs on the album, maybe more upbeat. Take me into the creation of that song.

Nef: You’re definitely right about that. It’s super-hard hitting, it’s not as mellow as my normal production, not as lo-fi. Fame is really responsible for a lot of that. He’s very selective with beats. I can play him beats for like an hour and he’s like, “All right, this one!” For me, the whole process was very natural. I wanted a lot of the artists to be in charge. I didn’t want to be like, “Nah, you’re rapping on this beat.” I picked him up that day, we chilled it was like a whole day thing just vibing out. He’s super into vibes and that’s what it was. We played music, we talked about Hip-Hop stuff, stuff and when it came time to pick the track he picked that beat and he was like, “Yo, I want energy. Play your best beats right now!” He did his verse right on the spot, one of the homies Azure Lauryn came through right on the spot, she wrote it, and Fame came up with the idea of going back and forth on the hook with that one. He helped with the transition and with the singing. He told Term, “Do what I did but just do it with your vocals.” He almost A&R’d that whole track. I was just there to help create it. It was really dope to see that – a super-OG in his element and you’re just there for the ride.

TRHH: The songs “Roses Now” and “Montauk” both have samples with harmonizing in them. Without snitching what genre of music did you sample those melodies from?

Nef: [Laughs] I wish I had those samples in front of me because I love doing that. We’ll be in the studio playing my old ones and I’ll be like, “Yo, this beat is crazy” and I’ll look up the sample I used and play it for a little bit. I would say off the top of my head based off the time and the beats I was making, it’s got to be Russian or French. I pretty much stopped sampling, not completely, but 75% of the stuff I was sampling at that time was not from the United States. It was like Prague, France, Russia and stuff like that. I was just finding these new sounds. That’s good though, because they both have got the vocal samples, but they’re like the most soulful ones on the project.

TRHH: You said you stopped sampling?

Nef: No, I stopped sampling stuff from the States. I don’t think I could ever stop sampling. I just started reaching out to different areas of the world to see what was different.

Nef: MPC, man. It always has and I don’t think it will change. Through the years I’ve brought out the 1000, the 3000, the 4000. Now it’s not analog, but I’m able to be hands-on. I use the Renaissance at home, but when I go to the lab to work with artists I always have it in my bag. I have the MPC Studio and a laptop, so, I can make beats. I’m good. If I have an idea, or I’m working on the spot with an artist I come with the idea there, take it home, plug it into the Renaissance and I’m good to go. It’s with the computer, but with mixing and stuff you can make it still feel like that 3000 or 4000. MPC all day, man. I’m a super-nerd with that.

TRHH: How did you first get into production?

Nef: I was a DJ first. I was dating this chick when I was in high school and her cousin was a scratch DJ. He let me use his turntables and I started scratching and having fun. I got my own set of turntables and started scratching, doing parties, and all of that. Then they showed me the MPC and it wasn’t even like I wanted to make beats, they showed me how to make a beat and I fell in love with the process. It was a whole new world and it was a wrap after that. It was super-organic. I still deejay, but production has a special place in my heart now.

TRHH: Who spit your favorite verse on Tabula Rasa?

Nef: Ah, that’s crazy [laughs]. Here’s the thing, people have been asking me and I can’t really say because I could have had this album done earlier, but I listened to it on repeat. I would mix it for a while, go back, listen to it, see if it had the vibe that I wanted, go back and work on it again. I never got sick of it. I normally get sick of stuff that I’m working on in that process. But, I keep falling in love with every track on there, to be honest. I won’t say my favorite versus but I was super-proud to get a Fizzyology joint with Term and Fame. They’re both family but that kid from a small town is like, “Whoa, this is really happening!” That was really dope. All of them really. I haven’t found a favorite joint yet. I might have four of my top ones, but I don’t have a favorite joint.

TRHH: Who is the Tabula Rasa album made for?

Nef: It’s made for the people, man. I walked through with a mindset to have a purpose in life. For me, music is super-therapeutic and I know what it can do for people. So, when I make music of course it’s for me, of course it’s for the fans, and whoever is close to me, but in the end it’s for people to get therapy from. It’s for that dude that is going through something in his life. He’s been out of work and he just needs to escape. It’s a good environment to do that. He’s not going out and getting wasted at a bar. He’s driving home and listening to it. Or it’s the super-rap nerds that listen to the album and they start a discussion; who has the better verse? Which beat is better? They get something from that, because I know I get something from that. When I hear a new album or I’m listening to something I get to escape the crazy world we’re in right now, just for a little bit. That’s who I make music for, and I always will, for sure.

Sherron Shabazz is a freelance writer with an intense passion for Hip-Hop culture. Sherron is your quintessential Hip-Hop snob, seeking to advance the future of the culture while fondly remembering its past.
View all posts by Sherron Shabazz →
This entry was posted in interview and tagged interview, Montauk, Move Different, Nef, New Hampshire, New York, producer, Roses Now, Tabula Rasa, Time is Money. Bookmark the permalink.