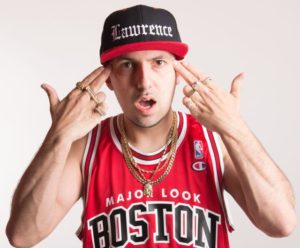 In 2008 Termanology gained notoriety with his critically acclaimed solo album, Politics as Usual. The album boasted a list of all-star caliber producers that hadn’t been since Nas’ Illmatic – and oh yeah, Term could really rhyme. The coupling of Termanology’s lyrics with a hall of fame list of producers made Term and underground darling and one of the best young artists in rap. Eight years later Termanology is revisiting that old formula with a new album called “More Politics.”

Termanology spoke to The Real Hip-Hop about More Politics, how his lifestyle changes are reflected in his music, and about his next solo album.

TRHH: How have you grown as an artist since Politics as Usual?

Termanology: I think growing as a person has something to do with it. You grow as a person and you grow as an artist. A lot of the things I was involved in eight years ago when I dropped that first album are not the same thing I’m involved with these days. Now I got two kids, I got an organization called Good Dad Gang. I’m not running the streets anymore so I think that kind of helped me open up my topics and the way I approach making music as well.

TRHH: More Politics has a more personal tone to it than previous records. You rhyme more about relationships and your children. Was it difficult for you to express that part of yourself?

Termanology: I wouldn’t say it was difficult for me to express it. I think it kind of comes out real naturally. The more difficult piece for me was, now the song is done, do I let the whole world know this? Do I really want to share with the whole world my relationship with my girl or my relationship with my kids? It is real personal. The hardest part is making the decision whether or not the people get to hear the music. At the end I felt like the music was so strong that it was okay to share my life with the people. The music was that dope that I thought people would rock with it.

TRHH: You made reference on one song that More Politics has more jewels than your previous projects. Was it calculated that you added more substance to your rhymes or did it just kind of come out that way?

Termanology: I don’t know, man. Over the years just realizing what stands the test of time, a lot of the times it’s the music that’s actually saying something. When you first get in the game you’re so hungry and you just want props. You want people to say, “He’s nice. He can spit.” In the beginning I focused on a lot of that, especially doing underground rap, that’s what they want – they want the bars. I focused on that a lot of my career but making this album it was conceptual. When you lean conceptually your thoughts come to life and my thoughts were positive. I’m trying to be positive these days and that’s what it all comes down to, spreading jewels.

TRHH: I remember years ago Ice-T said the greatest rapper is not the best rapper, it’s the one that touches people the most. He was saying that in reference to 2Pac. What’s your opinion on that? Is that how you see yourself going in the future?

Termanology: I kind of agree with what he said. I like a lot of artists where a lot of people would be like, “Term, why do you like that artist? I’m not a fan of them. I don’t like their style.” A lot of times my excuse is, “But do you hear what he’s saying though?” For instance, French Montana, a lot of people in the underground circle don’t really care for French Montana. They would rather listen to The Roots or more underground stuff. When you listen to the album it’s not only pop. You get a clear vision of who this person is, their struggles, and their pain. Then you start to relate to them as an artist. I feel what Ice-T was saying. I feel like Pac was one of the greatest. I don’t feel like he was technically lyrically as good as a Big Pun or a Big L, but he still touched the people. I like to do a little bit of both. Sometimes I do simple rhymes where they’re not really intricate or mind blowing, but the words that are said are deep so I still keep them. Some rhymes I say are all about word play and just being lyrical, too.

TRHH: How did the single “I Dream B.I.G.” come together?

Termanology: Buckwild had came to Boston to host a beat battle. I told him, “Hey, let’s get in the studio after the beat battle.” He went to the studio with me in Cambridge at my man Arkitek’s spot and laid down seven new beats. Out of the seven beats I had Dream B.I.G. and I’ve been sitting on that beat for like three years now. It was one of the first beats I got for the project. When he gave me the beat I came up with the chorus and the first verse. I was going to finish it myself but I kind of got lazy and felt like I said everything I had to say. I did a couple of beats for Sheek Louch’s album and in return he said he’d do a verse for me whenever I needed it. I just thought it would sound real fly with The Lox on it so I reached out to Sheek and then I reached out to Styles. We shot the video and I was lucky to be able to have Jadakiss in the video, Styles, Sheek, Buckwild, and Chris Rivers.

TRHH: I wasn’t aware that you made beats, man.

Termanology: Yeah, man. I got a few placements. I did a joint called “Drivin’ Round” on the Wu-Block album with Erykah Badu. I did two beats on Sheek Louch’s last album Silverback Gorilla 2. I did “Obamacare” and “Hold it Straight.” Even on my album Shut Up and Rap there was a beat that I made on there. I got a couple joints. I don’t really promote that I’m a producer like that. That’s more something I do for the fun of it ‘cause I just love Hip-Hop.

TRHH: The last time we spoke you said this album had beats from all of the producers on it, but also DJ Premier, 9th Wonder, and Evidence. What happened to those songs and will we ever hear them?

Termanology: The last time we spoke was the beginning. That was before I got Just Blaze and Dame Grease. I had a whole different lineup for this album. I had an Evidence beat and a Primo beat, but those two beats I ended up putting on a different project I got coming out called Anti-Hero. The 9th Wonder beat ended up being put on the Term Brady EP that I put out last year. All them songs are coming out, it’s just they ended up getting split up because conceptually they fit different projects more. The 9th Wonder joint is fire. There’s a video for that, it’s called Grade A. The record with Premier is amazing! It’s crazy! It’s going to be the next single off the next album, Anti-Hero. I got that in the stash and there’s a video for the Evidence joint, too. As soon as Anti-Hero drops you’re going to hear the new Primo joint and the new Evidence joint.

TRHH: When does that album come out?

Termanology: We’re looking at March. I’m about to go on tour with the Beatnuts and then I’m going to Europe with REKS. After that when I get home hopefully I’ll be able to get into the studio and put the finishing touches on Anti-Hero. It would be nice if it dropped in March or April, if not maybe early summer.

TRHH: We’re Both Wrong is a real powerful song. How did that concept come to life?

Termanology: I just rhymed with the beat. The beat says, “We’re both wrong.” I went to Q-Tip’s house with Statik and they were working on some DJ stuff. Tip started playing us some beats. Once Tip started playing beats I told him, “I had beats from Primo, Pete Rock, Statik, Alchemist, and all these people, but I’ve never worked with you, Tip.” I did a song with him rhyming called Stop, Look, Listen with me, him and Styles P, but I never rhymed on one of his beats. The beat that was playing just happened to be “We’re Both Wrong” and he was like, “Oh, you like this one?” and I was like “Yeah.” He gave me the beat right then and there on the spot.

The concept came because there was a lot of police brutality and things of that nature going on so I just wanted to touch on that. Not only did we touch on police brutality we also touched on certain social issues like dad’s not seeing their kids, or spending money on alcohol, designer sneakers or belts but not putting money in the bank for your kids. That’s what my verse was about and Saigon’s was about how police brutality has been going on forever and it’s only getting worse so we kind of have to keep our eye on the situation and hopefully we can make some changes to our community and the way that we’re operating as a society.

TRHH: Who is More Politics made for?

Termanology: Honestly it’s made for me. I didn’t sit there when I wrote it and thought, “I really hope everybody who bought G.O.Y.A. or 1982 likes it.” I really didn’t wanna go about it like that because when you start making music for other people that’s when it gets funny and it’s not really you. The album is just for me, man. I made it because I wanted to express how I’m feeling and make some art that reflected who I am as a person now and who I am as a rapper. So far everybody is saying it’s my best album, so apparently I did a good job at executing it and I’m really proud of it.

Sherron Shabazz is a freelance writer with an intense passion for Hip-Hop culture. Sherron is your quintessential Hip-Hop snob, seeking to advance the future of the culture while fondly remembering its past.
View all posts by Sherron Shabazz →
This entry was posted in interview and tagged Brick Records, I Dream B.I.G., interview, Lawrence, Massachusetts, More Politics, Show Off, Termanology, We’re Both Wrong. Bookmark the permalink.