Nick Weaver: Photographs of Other People

Posted on September 25, 2017 by Sherron Shabazz 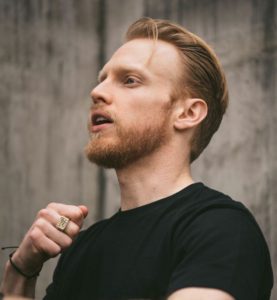 For nearly a year Nick Weaver has released single after single giving listeners a glimpse into his state of mind at each time. In typical Weaver fashion, the songs were thought-provoking and heavy on lyrics. The culmination of Nick Weaver’s stream of consciousness is a 5-track EP called “Photographs of Other People.”

Photographs of Other People finds the Seattle native taking his art to a new level, incorporating ideas, sounds, and methods not previously touched upon in his music. The EP is produced by Sendai Mike, MEMBA, Kevin Boris, and Nick Weaver himself.

Nick Weaver talked to The Real Hip-Hop about the importance of focusing on yourself, why it’s important to invest in your sound, his upcoming tour of Germany, and his new EP, Photographs of Other People.

TRHH: What’s the meaning behind the title of the EP, Photographs of Other People?

Nick Weaver: The whole album is super-centered on focusing on yourself. Specifically on this album for me, focusing on mental health and not focusing on others. It’s kind of a literal and figurative name. If you take a photograph of other people you’re not focusing on yourself. This album is really about that – coming to terms that you really need to do some work on your own, and prioritize yourself over everybody else or you’re never going to overcome whatever it is that’s irking you.

TRHH: That’s kind of the mode I’m in these days, man.

Nick Weaver: It ebbs and flows. I feel like it just sort of hits you at different times. Obviously it’s a byproduct of getting older too. You realize that I got tons of my own shit that I need to deal with, process, and improve so I can be happier in my own life. I can’t take on all these outside influences right now.

TRHH: How much does that affect romantic relationships?

Nick Weaver: For me personally it’s a mix. It’s all relationships in my own life. That goes all the way to professional music industry relationships. I think more than anything it’s just a newer perspective for me. It’s always in the back of your mind that of course I’m always going to help people, hear people out, and listen to their problems. But at the end of the day I’m not their psychiatrist or their manager or their therapist or their doctor. I’m still just myself and I have my own life that I need to fulfill. It’s really the idea of never losing sight of that. When you’re younger you get so invested in other people’s lives. Everything else is invested in other people that you lose sight of the fact that maybe you are overlooking you own issues and maybe you’re putting your own stuff aside.

TRHH: How much has social media help or hurt your goal? I find that social media can be draining, but it’s also helpful in some ways.

Nick Weaver: There’s a good amount of commentary from myself on a few songs on the album about social media and a little bit about the strain. I think it’s like anything else, if I could I would eat Dick’s cheeseburgers in Seattle every single day because they’re amazing, but I can’t because it’s not healthy to do that. I feel the same way about social media at the end of the day. I feel like it is good, it is entertaining, and it’s vital for independent artists like myself – it’s the only way we have to really communicate with fans and make sure that they see everything that they want to see. It’s super important but at the same time you have to draw a line for yourself and be aware.

I ask myself a lot, “Why are you picking up the phone and opening Instagram? Is it to really do something important or distract yourself from the other three things you need to get done today?” When it comes relationships and how I view my friends, family, and peers, I definitely feel overall it’s a strain and a lot of times you see uglier sides of people which is something that I touched on, on a few songs on the EP. A lot of times I just have to not even look because if I want to check in on somebody I go directly to their Facebook page or their Twitter and just handle it like that.

TRHH: How would you compare this project to your past releases?

Nick Weaver: This one is crazy different because it’s got a lot of singing on it. I think that’s the first thing anybody is going to notice the first time they listen to it. Honestly, people are familiar with a lot of my older work because it’s a lot more personal and has a lot of emotional stuff tied to it. This album brings back that but it’s different in the whole vibe that it’s about a whole different side of emotion that I don’t think I’ve ever really written about – yourself first. Everything else has been written about — maybe issue I’m going through but this idea of focusing on yourself, working on yourself, and never losing sight of that, that’s that overarching theme.

TRHH: Was it a concerted effort to make this project more melodic?

Nick Weaver: Absolutely, and a big part of that is just that I love all types of music and I think creatively I was hitting my own wall with what I was doing. I’ve been doing Hip-Hop for a long time now and I needed to do more than just write 16s, write hooks, and write verse after verse and bar after bar. Introducing singing really made it a lot more fun for me and a lot more interesting. I found my attention for the songwriting and song creation process went way up when doing that. It’s been a lot of fun, man.

TRHH: The last verse of “What You Doin’ These Days?” is excellent. You’re going at Trump supporters. What sparked that verse?

Nick Weaver: Thank you. That verse is pure and simple – it’s a product of the times. That verse touches on everything that I have been feeling and seeing. That’s another kind of duel name for Photographs of Other People, it’s this sort of examination of society where it’s at. There are pieces of that slammed in and out of the album. Both What You Doin’ These Days and Soundbyte are super politically and societal critiques. What really sparked that was where we were at during that time. I understand that just because you rap about it and tweet about it doesn’t mean you’re really changing the world and going directly at the cause, but for me it’s important to reflect how I feel about that stuff in a way that will get to people. Luckily I have the ability to do that through my music.

TRHH: As a lyricist how difficult is it to come up with the correct words to fit a song and how often do you scrap rhymes?

Nick Weaver: All the time, all the time [laughs]! I can’t even tell you. I’ll write a song and sit for a few minutes with it and go, “Yep, that’s the one.” I’ll go grab a glass of water, come back, and instantly delete it. As you’ve probably have heard very many times in the writing field, just write it down. Let it flow and don’t worry about editing it in the moment, because then it’s not in the moment. That is very true but at the same time something about writing lyrics, you can put the beat on loop and write for 3-4-5 hours if you want. Then you go back and have all these concepts. Just like I’m sure you have with your writing there are songs when you write them you know in your gut instinctually that that’s what you want to say and it’s perfect. Then there’s also songs where you don’t know and then there’s stuff that you write and you hate it. For me it’s never been a super fluid process. It’s never that easy, although sometimes it does come more naturally than others.

TRHH: You were asking fans in Germany for ideas about venues to perform in. What’s the status of that and what’s your touring schedule looking like this year?

Nick Weaver: We are hoping to go to Germany in November. We’re working right now on getting the booking all in place. We’re going to hit my top 5 cities in Germany, and that’s actually my top 5 Spotify streaming cities. That’s still Berlin, Munich, Essen, Hamburg, and Dusseldorf.

TRHH: As an independent artist what are some of the ups and downs that you have to deal with trying to make it financially?

Nick Weaver: Some independent artists may have some other financial backing, but for me every dollar that goes into anything is mine. You always toe the line between how much can I do myself and still be happy with the results, and how much can I invest in whatever it may be – creative design, videography, and photography. I think the one thing that never can change is you are investing in your sound. Even if you don’t have a lot of money or hit a period where your money is low, don’t ever compromise the quality of your sound. You can find cheaper options and maybe your quality goes down a little bit, but don’t go all the way back down to when your recordings don’t even resemble what you want your art to be like. Those are just the struggles. All of us that do this stuff want it to come out as perfect as possible, but the reality is you don’t have all the endless resources. Just maintain the quality that you like and you’re comfortable with anyone in the world hearing it, and always adhere to that. If you don’t have the money right now to do it, grab that second and third job and stack it back up so you can do it.

TRHH: What do you hope to achieve with Photographs of Other People?

Nick Weaver: I want to obviously give my fans something new and different from what I’m doing, because I’m always trying to elevate my art and take it somewhere that I love and other people will love. I really hope that people listen to this and feel what I’ve got to say. I really did put a lot of thought into what I wanted this entire project to capture about my own mind. Luckily I got to work with some amazing producers with MEMBA, Sendai Mike, and my good friend Kevin Boris, who is my drummer. They really, really helped turn this into a really nice sounding project, so I’m super thrilled about that.

Sherron Shabazz is a freelance writer with an intense passion for Hip-Hop culture. Sherron is your quintessential Hip-Hop snob, seeking to advance the future of the culture while fondly remembering its past.
View all posts by Sherron Shabazz →
This entry was posted in interview and tagged interview, Nick Weaver, Photographs of Other People, Seattle, Washington, What You Doin’ These Days?. Bookmark the permalink.