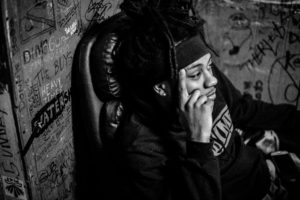 Clear Soul Forces emcee Noveliss is back with his latest project – a solo effort titled “Cerebral Apex.” The album is a 13-track release that acts as the soundtrack to an upcoming Japanese style comic book (Manga) written by the Detroit native.

Noveliss spoke to The Real Hip-Hop about his love for Japanese culture, a few of his favorite pro wrestlers and emcees, and his new album, Cerebral Apex.

TRHH: What’s the meaning behind the title of the new album, Cerebral Apex?

Noveliss: I started writing a Manga a couple of years ago and that’s the title I came up with. So, the album is based off of the Manga that I wrote. If you listen to the whole album it tells the story throughout the whole project.

TRHH: When will the Manga come out?

Noveliss: I’m not sure. It’s still something I’m working on. My artist Aaron [Hendrick] is the one who does all the illustration for the physical CD. It folds out and it has eight panels with all Manga art. It’s still something I’m working on trying to get it fully-published. I figured I’d do these albums to kind of tell the story and hopefully one day I can get it turned into a full-blown Manga. Maybe one day even an Anime.

TRHH: How did you get into anime initially?

Noveliss: As a kid I was interested in martial arts and Japanese culture. The first Anime I watched was Dragon Ball [Z] like a lot of people my age. I used to watch it a lot when I was little. It used to come on weird syndication channels out here. My mom would drop me and my brother off with my grandmother real early in the morning and sometimes Dragon Ball would be on. I started watching that and it turned into me seeking out other Anime’s and getting tapes from people. I’ve been a fan of it ever since I was a kid.

TRHH: Speaking of Japan, what inspired the song ‘5 A.M. in Shibuya’?

Noveliss: Back in January I took a trip to Japan with Mega Ran – shout out to Mega Ran. We went to Wrestle Kingdom and we did two shows out there. The way the travel system works in Japan is the Bullet Train stops running after midnight and they don’t start again until 5 in the morning. The cabs are really expensive, so if you miss the train you have to pay a lot for a cab or stick it out until 5 A.M. and take the next train. One night after one of our shows we went out to eat with some people and it was late. After we ate we just decided that we would stay out until 5. We did some karaoke for a minute – it’s super-popular in Japan. We stayed out until 5 and when the train came I wrote the song on the train.

TRHH: You mentioned Mega Ran, who is a big wrestling fan. I met you at the show that you guys did in my hometown around the All In event. How did your wrestling fandom begin?

Noveliss: Ah man, I’ve’ been a wrestling fan my whole life. The first time I ever watched wrestling my step-dad who was dating my mom at the time was trying to get on my good side – I didn’t like him. One day he called to talk to me and he told me to turn on wrestling. I turned it on and Vader was breaking Yokozuna’s leg. Ever since then I’ve been a diehard wrestling fan. I got real interested in Japanese wrestling and that’s kind of what I’m into now. I got into Japanese wrestling when I was really young. I think guys like Kenta and Hayabusa shaped the type of wrestling I like now.

TRHH: Do you have a favorite wrestler?

TRHH: That’s a great top 5. On the song ‘Running Away’ you said, “Bring a bulletproof umbrella to school/It’s raining bullets, and they don’t think about changing the rules.” Since you wrote that rhyme there’s been more mass shootings. What do you think it will take for the rules to ever be changed?

Noveliss: I want to say the simple thing would be to take guns away, because that’s what a lot of other countries have done. It’s obviously a lot more complicated than that. You can’t obviously all of a sudden say, “Guns are illegal, everybody hand your guns in.” There are people that already have guns, so you can’t do that, that’s stupid. I really don’t know. That’s the hard part. You can feel how you feel but ultimately at the end of the day, the ones who have the power to make the change are going to have to do it. I wish I had the answer, but I don’t. It would obviously be a process, but something clearly needs to be done, because thoughts and prayers don’t save lives. You have to take action and actually do something about it.

TRHH: You’re from a place with a rich history of emcees with different styles; who inspired you to want to be an emcee?

Noveliss: Ah man, that’s a good question. Definitely Eminem, definitely Black Thought from The Roots, MF Doom, Redman, and Nas. When I was younger I started off listening to some real rap. I used to take my cousin’s tapes and he was listening to some dope stuff. So, I was listening to Nas and Redman when I was a young kid. I always had an idea of what Hip-Hop should be and what it should sound like.

TRHH: Speaking of Nas, you paid homage to him on ‘I Gave You Power’ but added your own twist. How did that song come together?

Noveliss: That’s one of my favorite Nas songs ever. Obviously, I think it’s mad creative. I took that idea that he had and put my own spin on it. On his version he raps from a perspective of being a gun and everything that a gun goes through. On mine I rap from the perspective of the Infinity Stones from the Infinity Gauntlet from the movie and comic book. I’m a huge comic book fan and a huge fan of that story. When the movie came out I wanted to do a song dealing with that. I wanted to make it creative and for it not to be corny. Whenever you tackle a subject like that it has the potential to be mad cheesy. I just did it in a way that I thought would be dope and at the same time paying homage to one of my favorite emcees.

TRHH: You clearly put a lot of effort into lyrics; what’s your writing process like?

Noveliss: A lot of people ask me that. I actually don’t sit down and force myself to write music. I go to the gym and workout a lot, so I write most of my stuff when I’m at the gym. I write most of my stuff when I’m in the car sitting in the driveway, in the shower, or if I’m driving. When it hits me, it hits me, and I’ll sit there and write for hours. I don’t ever sit down and say, “You gotta write today!” Most of my songwriting is really organic.

TRHH: Who is Cerebral Apex made for?

Noveliss: I get a lot of fans writing me messages and sending me emails. I think I speak for people who are interested in Anime and that culture. Ultimately, of course I make music for those people who are interested in those things but don’t have the voice to put it in words or make their own music about it. I think it’s for everybody. At the end of the day, it’s for anybody that’s interested in a concept-driven album that tells a creative and adult story, and loves Hip-Hop. Anybody who likes dope Hip-Hop and creativity, it’s for them.

Sherron Shabazz is a freelance writer with an intense passion for Hip-Hop culture. Sherron is your quintessential Hip-Hop snob, seeking to advance the future of the culture while fondly remembering its past.
View all posts by Sherron Shabazz →
This entry was posted in interview and tagged 5 A.M. in Shibuya, B Fine, Cerebral Apex, Clear Soul Forces, Detroit, I Gave You Power, interview, Michigan, Noveliss, Running Away. Bookmark the permalink.