Posted on September 12, 2022 by Sherron Shabazz 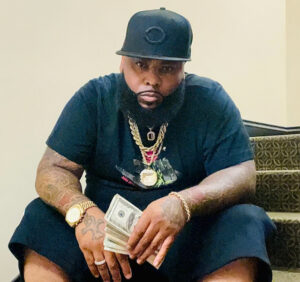 The word “penta” is of Greek origin and simply means “five.” We’re all used to hearing the geometrical term “pentagon” which means “five sides.” In the case of VA emcee P.U.R.E. (Providing U Real Experience), “Penta” represents the title and the number of tracks on his latest EP.

Penta comes courtesy of God Mode Records with distribution by Fat Beats. The release contains production by Jamil Honesty, chatproductions803, and Willie Downy. The project is P.U.R.E.’s second release of 2022, but not his last.

The Real Hip-Hop talked to P.U.R.E. about his new EP, Penta, the advice he received from a member of the Wu-Tang Clan, and his upcoming full-length album.

TRHH: What is it about Jamil’s production that suits your rhymes so well?

P.U.R.E.: Shit is raw! His drums are heavy. It’s just raw. It’s like when he makes the beat and I rhyme on it, he’s up there with me. His production just suits me. It’s like, if I was to make a beat that’s how I would want it to sound. Straight like that. He’s a great producer. Excellent craftsman with the bars, but also a great producer. We also have some things in the works, like a collaboration project with just us two. Be on the lookout for that.

TRHH: Why did you drop this project so soon after Tokyo Plug?

TRHH: On the song “Y’all in Trouble” you rhymed non-stop without a chorus. Why’d you choose to attack that beat in that way?

P.U.R.E.: It was asking for it! That’s the kind of melody where you just go. There is no point in that melody where a hook could go. The only thing I could do really as far as the hook is concerned is just hum like Marvin did. That joint is bananas.

P.U.R.E.: I gotta be comfortable. I have to be in a comfortable environment. It has to be quiet. I just gotta hear what I’m working on. The people gotta be to a minimum. When people are around and you’re trying to create and write, the people can be quiet but you can still channel their thoughts by them being quiet. They don’t have to even speak, but their thoughts, you can pick those up. I prefer just being alone when I do that.

TRHH: You remind me of Nas. Is he an inspiration of yours?

TRHH: The first time I heard you was on Raekwon’s song “M&N.” How did you get down with Rae and what was that experience like?

P.U.R.E.: I met Rae down here in Virginia at a club called The Compound down here in Portsmouth through Napoleon from Wu-Syndicate. Met him, we clicked, I gave him a CD. He left and two days later he hit me like, “Yo, can you make it to New York?” I was like, “Yeah.” Got up there, we started working, put a few joints down, and it was on from there. That experience taught me a lot. It opened my eyes to a lot. It really showed me that everybody is just people. Even though there is a stage and a screen, but still on that stage and behind that screen is a person. Regular person. I learned that. Ain’t nothing to it. Everybody has something special, they just gotta find it. The experience was amazing. Being on tour with a legend, I would have never thought that. I enjoyed that.

TRHH: What’s the best advice the Chef gave you business-wise?

TRHH: On the song “Unforgettable” you speak about someone that you thought was a friend and turned out not to be. How did you end up handling that situation?

P.U.R.E.: When it comes to trust and people you gotta do it in a hard way. You can’t be so easygoing. I’ve learned that. You can’t be easygoing, especially in any kind of business that someone sees is profitable and has a chance to do something. You always need your guards up. I don’t care if a person says, “Yeah, I’ma do this and that for you.” You always gotta keep your guards up. I felt like that record is for a lot of people who have ever been through something with somebody. It’s unforgettable because once you go through it you’ll never forget it. You can get past it, but you’ll never forget it. I think that’s a record that a lot of people are going to relate to because everybody has been in something with somebody.

TRHH: You have a full-length album coming later this year. What can fans expect to hear on that release?

P.U.R.E.: Top notch production from orchestra, to gritty, to laid back. It’s going to be something in there for everybody. I’m not going to leave nobody out. It’s going to be a well-rounded project. Not just one-sided. I know it’s a saying that you can’t please everybody, but you can give them something! They might not be pleased, but it’s something. They’re gonna look at it like, “I remember that.” It’s gonna be like if certain people don’t like it, it’s going to take some time for it to grow on them. And then they’re gonna appreciate it. I appreciate music more than I have now because of the music that’s coming out [laughs]. That makes me appreciate the music more now because shit just don’t stick to you. Like they say, when you get a home cooked meal over the stove that shit sticks to you versus what you get in a microwave. That’s the difference between the two. It’s microwaved and fuckin’ home cooked shit now. I like to take my time and prep my food and put it over the stove instead of putting it in a microwave.

Sherron Shabazz is a freelance writer with an intense passion for Hip-Hop culture. Sherron is your quintessential Hip-Hop snob, seeking to advance the future of the culture while fondly remembering its past.
View all posts by Sherron Shabazz →
This entry was posted in interview and tagged Fat Beats, God Mode Records, interview, P.U.R.E., Penta, Suffolk, Unforgettable, Virginia, Y’all in Trouble. Bookmark the permalink.