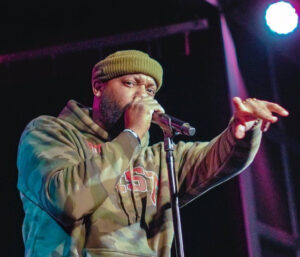 Chicago emcee Philmore Greene ended 2020 with the release of his full-length sophomore album, “The Survival Scroll.” The 13-track album is a no-nonsense ride through Chicago. Greene gives listeners stories of pain, love, and hope that dive much deeper than what we see on the 10 o’clock news. The project is rugged, raw, and soulful, just like the city of Chicago.

Philmore Greene talks to The Real Hip-Hop about his new album, The Survival Scroll, why he thinks a belief in God is essential for everyone, and why the violence in Chicago will never end.

TRHH: What’s the meaning behind the title of the album, The Survival Scroll?

Philmore Greene: The Survival Scroll stems from different elements. It has several meanings, but it represents a body of work — any genre of art that gives you knowledge needed to survive in our world. The messages are especially for those who seek to survive or thrive within these times of trials and tribulations of life right now. They consist of seven different elements. You can see them on the back-cover art – food, water, shelter, air, love, health, and God. It was just inspired be the times. Everybody is trying to survive. That’s why the tape leads with James Baldwin. He’s speaking about jobs, and he said these things back in the 60s, but they’re still relevant to today. It was just a play on words, man. Survival Scroll, we’re all trying to survive, 2020 was crazy.

I made it my business to put the album out in 2020 – I had to do that. That’s what it was, and really, the project had another title before The Survival Scroll. A few things happened within that time and I got uninspired. I hollered at my business partner and was like, “Man, I’m going to change the title.” He was like, “Nah, why?” I told him I wasn’t inspired anymore to speak about that and name it that, because the cover art didn’t come through for it. Long story short, I told him the title that I was going to call it and he was like, “What about The Survival Scroll?” I sat down with it. Survival Scroll fit the music better than the title I had already. I can give the name, because I’m never going to use it. It was going to be called “Essential Work.” It’s super cliché and it was supposed to come out earlier in the pandemic, but it didn’t. Everything played out the way it was supposed to.

TRHH: I have to admit, when I saw the title “The Survival Scroll” it reminded me of the Spirit of Truth. I’m sure you’re hip to him. He’s the cursing preacher from the 90s who had the public access show.

TRHH: [Laughs] Yeah, I just knew I was going to hear that on the album somewhere. “Bitch, I’m flowin’ straight from the survival scroll!”

Philmore Greene: My man Flee Lord used that already though. Shout out to Flee Lord, he used it on the Pete Rock album.

TRHH: How would you compare this album to your first full-length album, Chicago: A Third World City?

Philmore Greene: I wouldn’t compare ‘em. It took a course of over five years of music to make that, so, I wouldn’t compare the two. I was in a different place with my life. My youngest is 4 years old now. When I started Third World City she wasn’t born. I wouldn’t compare ‘em at all. But if you wanted me to go back and look at things from a different perspective and look at both albums, I would say Third World City is more vulgar. When you’re vulgar you can say things different ways. I chose the more vulgar way to say things to get people’s attention. Survival Scroll is more laid back. You can get a drink to it and vibe with me. I’m not cursing as much on The Survival Scroll. I still get busy, but I’m not using that much profanity on The Survival Scroll. It’s more of an in-depth project. Both of them are, but The Survival Scroll is “vibe with me and follow me through this” and Third World City is, “Okay, get your popcorn ready, listen to the music.” You’ve got to listen to both of these projects front to back in order to fully understand it.

When I recorded The Survival Scroll eight of those records were recorded in my kitchen. So, 9 times out of 10 most of those records were recorded in the wee hours of the morning by myself, so it was only me to vibe out to. Opposed to Third World City – it was before the pandemic, so, we had sessions with a room full of people sometimes and everybody vibing out to it, so I’m getting different feedback from different directions on that one, as opposed to me saying, “This is what it is, this is what I like, I’m going to use this beat, I’m going to slice the fat off of these songs, and I’m going with this batch of records.” The Survival Scroll is more intimate and Third World City was more about getting your popcorn ready because we’re about to take you on a ride. It was a lot of people’s first time hearing me, so, it really was a lot of shock value behind that.

TRHH: You worked with Skyzoo on the song “Time.” How did that collaboration come about?

Philmore Greene: Shout out to Skyzoo, that’s the homie. In 2019 we brought Skyzoo to Chicago. It was a sold-out show at Bourbon on Division and we rocked the house. I was with him throughout the whole weekend, took him to the Taste of Chicago, and we actually did a record before Time. The other record was actually our first record together. Time was the second record. Time came about because I had a batch of beats from Kenny Keys that I was listening to when I first got my studio set up. Me and Skyzoo were texting and I sent him a video of my studio equipment. Like, “We’re locked down, I know you don’t record yourself either, so, boom, here’s the connection.” He probably already had connections to studio equipment, he’s Skyzoo. I sent him the link, he ordered his stuff, and he came back through the text like, “Yo, what is that playing over the speakers?” I was like, “It’s my man Kenny Keys and I’ve got a record to this called Time.” He said, “That shit is banging!” I told him I’d save him a spot if he wanted to get on it and he was like, “For sure.” I didn’t send it to him right away because I didn’t want it to get lost in the sauce. He was working on All the Brilliant Things.

In the middle of that he had to have surgery. He had this surgery and he’s down for the whole month of August. September he’s back and I texted him, “Glad you had a speedy recovery” and a few days after that I asked him “Are you still working on All the Brilliant Things?” He said, “I’m still doing it. It’s the album that takes forever to end. What’s the deal?” I told him I still had the Kenny Keys beat and whenever he got into a space to record to let me know. He was like, “Shoot it over” and three hours later he sent the verse back with all the stems ready to go. I believe that was the very first verse he did for someone else after the surgery. That was real special. We built a rapport on tour. He’s a great guy. Salute to Skyzoo, that’s my Hennessy brother.

TRHH: As you mentioned earlier, some of the song titles contain elements that are essential for life. One of those songs features words from Minister Louis Farrakhan, and it’s titled “God.” Not everyone believes that God is essential to live; why do you believe God belongs alongside health, food, shelter, and water?

Philmore Greene: There’s 99 gods, no matter which one you believe in. God can be a candle. Whoever you worship as your god, that’s your god. That’s who you pray to and have your belief in. It has to go along with life. Everyone worships something. Worship is an aggressive word, but everyone has a fascination in something that they look up to and look forward to every day. Your children can be gods and goddesses. We’re all gods. God is essential because that’s what steers us through everything. We all know everything had to be created somehow – from man to things. So, god has to go along with those elements in my eyes.

TRHH: On the opening track, “Live from the Metropolis” you say “This teenage story of youngins in a cage/And all the young mothers with baby father’s in a grave/Praying hands with crosses be tatted with his name/And their young sons will grow to do the same.” That was so cold. In your opinion, what will it take to the stop the cycle of violence that has destroyed so many families in Chicago?

Philmore Greene: Thank you. I’m going to answer from someone else’s actual words, but it’s still my opinion. We all know that America was built off crime. We all know without crime and criminals we wouldn’t have judges, lawyers, state’s attorney’s, and police officers. Those jobs pay off wages designed on crime. So, at the end of the day my answer references back to a 2Pac interview. He said, “You can’t expect anyone to stop doing what they’re doing if you can’t put food in their mouths or money in their pockets.” So, if we can find a way to get these guys in a position to better their lives in a great way – feed their families and still have money in their pockets – that’s when we’ll see a real decrease in violence.

The honest opinion is, even in Chicago where we’re from, the violence won’t stop. I’m sure you can attest to this, it’s everlasting beefs in our neighborhoods. We have family members who were probably killed in the 90s and we grow up with that and hold those grudges. For a block, an area, or whatever, it’s everlasting wars. I don’t think it’s going to take anything. You can’t bring those people back. Wars are everlasting in the neighborhood and on Live from the Metropolis I paint that picture. That dude, he had a gun and thought he was God. He had so much power that he was ready to do something to somebody and the gun jammed on him. As seconds transpired, the tables turned that fast. So, now he’s praying to the same God that he wasn’t honoring. America thrives on crime, but in the words of 2Pac, if you can’t put money in their pockets or food on their plate it’s not going to happen.

Philmore Greene: Opportunity/jobs. That’s what I mean. I’m not saying give people free stuff and pacify people. No, I mean jobs and opportunities in the neighborhoods. Stop being racially biased with our people and give us a fair shot at everything. Don’t judge a woman by her name that her parents gave her from birth and not hire her. Give us that. We’re not dealt a fair hand already. That’s what I mean to clarify that.

TRHH: Who is The Survival Scroll album made for?

Sherron Shabazz is a freelance writer with an intense passion for Hip-Hop culture. Sherron is your quintessential Hip-Hop snob, seeking to advance the future of the culture while fondly remembering its past.
View all posts by Sherron Shabazz →
This entry was posted in interview and tagged Chicago, Chicago: A Third World City, Illinois, Interlude (God), interview, K Town, Live from the Metropolis, Nighttime Maneuvers 3, Philmore Greene, Team Culture Clothing, The Survival Scroll, Time, West Side. Bookmark the permalink.