Posted on September 26, 2022 by Sherron Shabazz 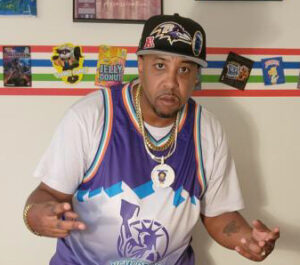 Emcee PiFF (aka Pennywise Jr) has been known to partake in the greenery – as if you couldn’t tell by his rap name. PiFF has been on a roll as of late. He ended 2021 with two projects: an EP produced by Brazilian producer F-Plus Beats titled “War Lord 2.5”and an album with ManZu Beatz called “The Assassination.” In the spring of 2022 the Baltimore native released a free mixtape called “PiFF Invasion.”

PiFF reunited with producer F-Plus Beats for a new project dedicated to one of his favorite pastimes called “Sativa.” Sativa is a 6-track EP produced entirely by F-Plus Beats and comes courtesy of PiFF Records.

PiFF spoke to The Real Hip-Hop about marijuana improving his physical and mental health, working with producer F-Plus Beats, and his new EP, Sativa.

PiFF: I’m a smoker as you can see. I do it for depression and anxiety. I was diagnosed with that in about 2013. The depression kind of went away, the anxiety is still there. Everyday life issues, man. We all need something to kind of get by. Two things I keep in mind; I keep the lord close to me and this helps a lot as well. With that being said, I’m a smoker and I wanted to give my audience something that comes from where my life journey is. I started an EP called Sativa. It’s part one of a three-part series.

TRHH: I’m interested in what you just said. You said you keep the lord close?

PiFF: Yeah, I keep him close, man. I’ve been saved since I was eight years old. I’m not perfect. My walk ain’t perfect. I make sure I talk to him every day and tell him what I need and just try to stay faithful in the walk. Like I said, I ain’t perfect. I keep him my number one every day. I tell people he’s my engine, I’m just the driver. Sometimes he slows me down, sometimes he speeds up, so I have to keep up with the pace. In a sense he just keeps me where I need to be in life. I’ve been following him for a long time.

TRHH: There are many people who might feel like worshiping God and smoking weed are contradictory. How do you bring those two together?

PiFF: I look at it like this, it’s about your actions, but actions speak louder than words, too. I’ve been going to church for a very long time. People know who I am. I’m myself around everybody. I don’t broadcast that I smoke weed, but people know who I am. They follow me, they might see me out, and they know. It’s not something that I hide. I don’t think people can say, “How can you smoke weed and follow the lord? Can that be called a hypocrite?” I kind of look at it like I’m not perfect.

Everybody is fighting something. Everybody has something they’re going through that they need help with. I’m going to continue to smoke. I look at it like, if people start judging you because you smoke they need to start looking at themselves because ain’t nobody perfect. Like I said, I don’t do it recreation-ally. I do it because I have issues with high anxiety and stress. It helps me.

TRHH: It helps a lot of people. Regarding the anxiety, were you ever prescribed medication for that or have you ever tried to get to the source of that and better it?

PiFF: Yeah. I’ve tried different antidepressant pills that doctors prescribed me. They didn’t work. Im’ma keep it 1000, I wasn’t really like on it, on it. I could see the side effects of the medicine I was given wasn’t really working. I also have a condition called Cluster Headaches. For a lot of people that know about Cluster Headaches, they’re like ten times worse than migraines. I’m on a seizure medicine that I have to take every day and I have an oxygen tank in my house because of these headaches. Weed helps the headaches, too. It really does. They tried mad medications to try to figure that out too and it didn’t work. Coming back around to the marijuana; I haven’t had an episode in three years.

I started smoking weed a little bit more. I’m not doing anything but natural herb. No oils, no edibles, none of that stuff. I’m just smoking weed and letting it get into my stimuli. For some reason it really helps. I haven’t had an episode in a long time. I was bad drinking water, but now I’m drinking a lot of water, working out more, just kind of becoming healthier. Smoking a little herb sometimes helps. My doctor asked me why I think I haven’t had an episode. He knows I smoke – I keep it real with my doctor. I just tell him what it is and he’s like, “Whatever you’re doing, I’m not going to tell you to stop, but it seems like it’s helping.” That’s coming from a medical professional that’s been following my path since 2006 when I started having these headaches.

TRHH: Is sativa your favorite strain?

PiFF: Yeah. Sativa is my favorite strain. I got a lot of different strains that I like. Indica is another strain that I like a lot. Sativa has the most potency, it gives me a better focus when I smoke it than Indica or any Hydro’s. Sativa has the best quality to me.

TRHH: How’d you hook up with F-Plus Beats to decide to do this EP?

PiFF: I’ve been working with him for a while. We dropped War Lord 2.5 which is like a spin-off from a series I’ve been working on. That was the first time I really hooked up with him. He’s from Brazil. He’s a doctor. I’m not sure what kind of doctor he is, but he makes beats on the side. We built an online friendship. We started talking and he started throwing me beats. From there I just started building EP’s. This is my second EP with him.

I’m very creative. I picked the beats, wrote three songs, recorded those three songs in three hours. Went back about a week and a half later and recorded three more songs for another three hours and it was done. Got the artwork done by my man Pro and it was a wrap from there. When it’s time to go I work really fast. I already got the part two ready to drop. That’s how fast I work.

TRHH: The song “I’m Not OK” tells personal stories. Is it difficult for you to share those stories that involve people that are close to you?

PiFF: No, not really. I’m from Baltimore. I’ve seen a lot and I’ve been around a lot. My mom, she was a crackhead. I used to be around all kinds of people as a youngin just kind of being out there. She wasn’t the type of mom to keep her kids protected, so we were always seeing things we weren’t supposed to see. We lived in Compton, California for about four years and that changed my life forever. Moving back to Maryland I just look at it as it’s part of my life. It’s who I am. For me, I just move how I move and I really think about other people’s feelings too when I move. A lot of people don’t do that. I like to build, converse, and talk to people outside of the whole music thing, too.

TRHH: On the song “You Did It” you say, “So what they don’t like your music/You give ‘em power it’ll change your perspective when you light into it.” How were you able to get to the point where you didn’t give power to negative people?’

TRHH: What’s your favorite song on the EP?

PiFF: I don’t have one. Im’ma keep it 1000. Chef “P” is going to be something special. It’s for the people that like to cook. It’s a song about me being on a beach selling plates and I’m talking about what’s on the plates and what’s going on around me. When the fans, listeners, and everybody on social media see the album cover they’re going to understand the vision and where I was going with this EP.

TRHH: Who is the Sativa EP made for?

PiFF: It’s made for the smokers. The people that want to hear a story and not just somebody rapping over a beat. I want everybody that loves Hip-Hop to at least tap in and give it a chance. I think they’re going to love it. I got a lot of people that were waiting on it. I got a lot of love coming in. I appreciate the love. F-Plus made some awesome beats to this joint. I’m really excited for the fans to get to know where I’m going with Sativa and moving forward from here. Like I said, it’s a three-part EP and this is the first installment. The second one is done. If you’re a real boss you’re going to want to tap in because I’m not just talking, I’m really talking. I’m giving you some of my life stories and experiences.

In that one track “I’m Not OK” I’m talking about some real dudes I lost in my life. Some dudes that really inspired me where it’s been twenty years since some of these dudes have been gone and I’m still talking about them and I’m still writing about them. I’m still dreaming about them. I wake up sometimes thinking about these dudes. We weren’t super-close but they inspired me in some way. A lot of dudes from back where I’m from in Baltimore, when they hear this they’re going to understand. They’re going to know I’m not just talking, I’m giving you substance. I want everybody to tap in, listen to it, and enjoy it. I’m going to drop a physical on it at some point, I’m just kind of waiting on something to pan out. I hope everybody looks forward to that as well.

Sherron Shabazz is a freelance writer with an intense passion for Hip-Hop culture. Sherron is your quintessential Hip-Hop snob, seeking to advance the future of the culture while fondly remembering its past.
View all posts by Sherron Shabazz →
This entry was posted in interview and tagged Baltimore, Chef P, Durham, F-Plus Beats, interview, I’m Not OK, Maryland, North Carolina, Pennywise Jr, PiFF, PiFF Penny, PiFF Pennywise JR, Sativa, You Did It. Bookmark the permalink.