Posted on October 3, 2022 by Sherron Shabazz 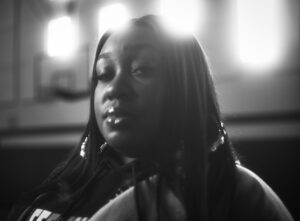 The words “pretty” and “bully” don’t usually go together, but in the case of Buffalo emcee Pretty Bulli the name fits perfectly. Her style is slick, yet ferocious. The Pretty Bulli teamed up with west coast producer Castle Money Beats over the summer to drop an EP called “Duffle Bag Bulli.”

Duffle Bag Bulli is a 6-track EP featuring Ruste Juxx, Alma Ave Writtens, L-Biz, and Illa Ghee. The project is produced by Castle Money Beats with a special bonus track produced by Kidd Called Quest. Quest also produced Bulli’s latest single “Homage.” Homage is a song that pays respect to women in Hip-Hop that paved the way for Bulli and others. The song re-works the music to MC Lyte’s classic hit “Paper Thin.”

The Real Hip-Hop had the great pleasure of talking to Pretty Bulli about Duffle Bag Bulli, the pain of being betrayed by her best friend, and her new single, Homage.

Pretty Bulli: When I say “in my bag” I think I mean it in a different way than everybody else. Usually when people say it they’re talking about only money. With me, sometimes it can mean I’m in my feelings or I’m in my bag – I got an attitude. Or I’m chasing that bag. It was an abundance of things. This is a crazy point in my life right now and I’m chasing a lot of things. Dream chasing, money chasing, goal chasing, and it was an “in my bag” moment.

TRHH: Is the crazy time tied to your career or is it something else as well?

Pretty Bulli: Life [laughs]. I do a lot. I’m a phlebotomist during the day, I’m a mommy full-time, I grind on my music all day, I make edibles. It’s multiple hustles inside of me. I have one goal in mind, for my babies to be good.

TRHH: Out of all of those things what’s the hardest job?

Pretty Bulli: I don’t think any of them are hard. I would say the hardest time is being away from my kids. It’s so much that I have to do as a single mother. I’m dedicated to my music, I’m dedicated to my job, and I love my kids. I have to do this for them. Being away from them would be the hardest part, I don’t think any of the jobs are hard though.

TRHH: What do your children think of your music?

Pretty Bulli: My son raps as well. He’s all with it. My daughter on the other hand is still a little shy about it. She doesn’t want to be in any videos yet, but she’s very supportive.

TRHH: That’s so dope. How did you hook up with Castle Money Beats to decide to do the EP?

Pretty Bulli: It was actually internet bound. My manager hooked me up with him. How they met, I’m not really sure. Shout out to L-Biz and Team IStayBizzy. They had a prior relationship because they had done a project together already. I guess my name came up and once I heard some of his beats I did one of them and that was “Who You Talkin’ 2?” From there, it was like, “yeah, we should do an EP.” He actually came up with the idea for Duffle Bag Bulli, so shout out to Castle Money for that.

TRHH: You have a bonus track on the EP produced by Kidd Called Quest called “Simplicity” where you say “don’t try to soften me up, because I’m naturally nigga.” What did you mean by that line?

Pretty Bulli: [Laughs] I’m a tomboy, all day. This industry, I’m sure you know, they want women to be a certain way. Especially coming into the industry. They want sex to be glorified and that’s the opposite of me. Not that I don’t feel like I’m sexy or anything of that nature, but I don’t lead with that. The softening up is always coming my way, so to speak, but I’m not with that [laughs].

TRHH: You’re independent right? Where does the softening up come from?

TRHH: Stay true to yourself, always.

TRHH: You obviously take your pen game seriously; what is your writing process like?

Pretty Bulli: It actually depends on the beat. A lot of people look at me crazy when I say the beats talk to me, but they do. When I put a beat on I might listen to it 2-3 times and it will tell me what I should talk about. If a topic is given to me, I’ll start with the hook and then double back and do the verses. It depends on the beat.

TRHH: What is it about Buffalo that has taken the Hip-Hop world by storm?

Pretty Bulli: I’ll say this, it’s always been here. There’s more so a brighter light shined on us because of Griselda and Benny. We’ve always been Hip-Hip bound. It’s crazy sounds here and it’s all different. Buffalo is like a gumbo. You got so many different sounds coming out of Buffalo, but it’s all Hip-Hop though. It’s been that way since I can remember. I’ve been writing since I was 13 and on the corner with the boys freestyling. It’s always been like that here.

TRHH: Your latest single “Homage” pays tribute to the female emcees that influenced you. Why was it important for you to make Homage and do it over a classic MC Lyte record?

Pretty Bulli: I don’t feel like it’s done enough in the game. You don’t hear women giving credit to why they started. It’s a male-dominated industry anyway, so when women come in the game kind of like how I am, not leading with sex, it’s usually a male behind it. Somebody of the opposite sex that they’re giving thanks to for what they do. I have to be honest, if it wasn’t for the Eve’s and the Foxy’s I probably wouldn’t be doing this. I don’t feel like enough credit is given when it comes to women in the industry. It was needed.

TRHH: Why don’t you think that credit is given?

Pretty Bulli: Now see, that I don’t have an answer for [laughs]. I wish it was more of it, so I said, “Shit, why not start with me?” I don’t know. I feel like it should be, because it’s not like it’s not other women in the game that embraces one another, but the light is not really shined on that. It’s always shined on the cattiness, the bickering, the back and forth, and putting women against each other. It’s not really shined on, “Oh, she pulled her on the stage and gave thanks.” They don’t shine light on that and it’s needed.

TRHH: You have a song on the EP called “Pain” where you speak about serious betrayal. Is that song based on a true story?

Pretty Bulli: All my songs are based on true stories.

TRHH: How were you able to get over that situation?

Pretty Bulli: I still haven’t. I still haven’t. And when I wrote that verse it was actually the first time I vented about it. Even for me to hear that song now I still cringe a little bit. It’s a sensitive topic. I miss my best friend. Life changed, we took different paths. It still hurts. People grow apart sometimes and I think this was one of those situations.

TRHH: It seems to be more than growing apart though.

Pretty Bulli: It was a lot. I was trying to keep it cute [laughs].

TRHH: How do you feel like it changed you?

Pretty Bulli: I feel like I was too giving in relationships – friendships included. I have a tendency of expecting myself from someone. I give so much love, I give you this, I give you that, I give you all of me and I’m expecting you to reciprocate that. That doesn’t mean you feel that way about me. I have to stop expecting me from other people and let them be who they are.

TRHH: I’ve had these hard lessons, too. It’s not about feeling like you, A person can love you, support you, and be there for you, but they just do stuff differently. It’s tough. I’m the same way. I treat people how I want to be treated, so when somebody does something that I think is slick I’m like, “Whoa, fuck them!”

TRHH: That was dirty, but it ain’t necessarily dirty. It depends on the situation. That’s just how they move.

Pretty Bulli: That’s okay. We’re stronger because of it.

TRHH: You have the new single Homage with Kidd Called Quest; what else is coming up for you?

Pretty Bulli: We’re actually working on an EP as well. We’re dropping sneak previews of the EP. We’ll be dropping another single soon, it depends on Quest. It’s coming soon though.