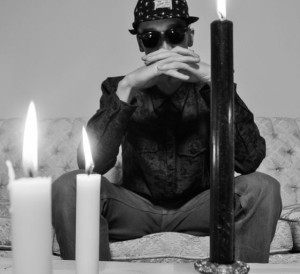 Being a Chicagoan there are certain things you can count on happening every year – a miserable winter coupled with a beautiful summer, a disappointing season from one or all of the city’s sports teams, and a project from rapper ProbCause.

Each year Prob releases music that doesn’t fit into any of the boxes that Windy City rap artists are normally tossed in. His music blends various styles, sounds, and genres together into one complete package – ProbCause’s new project is no different. The latest offering from ProbCause is a 12-track album titled “Drifters” released on electronic artist/producer Gramatik’s Lowetemp Music label.

The Real Hip-Hop spoke to ProbCause about his upcoming performance at Chicago’s North Coast Music Festival, joining forces with Gramatik’s Lowtemp record label, the division within the Chicago Hip-Hop scene, and his new album, Drifters.

TRHH: Explain the title of the new album, “Drifters”.

ProbCause: Shit man, it was a combination of things. Partially because I’ve been on the road traveling a lot, playing a lot of shows out of town, and living out of a backpack. I just kind of felt like I was drifting. The other part of it was the music is kind of dreamy, airy, and in this weird kind of space. A lot of it I was drifting off and in a daze. It’s taken from that kind of weird headspace. It’s just kind of a fitting word to describe the sound of the album, but also a lot of the concepts behind the music.

TRHH: Tell me about the first single, “I Feel U”.

ProbCause: Basically I started seeing a lot of people around me acting a little bit weird. People who I used to fuck with were asking for favors and acting weird. I was in a weird headspace when I wrote it – kind of pissed off, kind of depressed, and annoyed with people. It’s kind of an angry aggressive song. In certain moments I’m talking about specific people and specific situations, but I’m generally talking about people who turn their back on you and show true colors when things hit the fan. When you start getting a little bit of buzz you start seeing how people really are and how they act. It was just my reaction to people around me starting to act a little goofball.

TRHH: [Laughs] Between people acting funny with you and you living out of a suitcase, it sounds like your life is hectic. Are you in a good place?

ProbCause: [Laughs] Yeah, yeah, yeah! You know it sounds crazy. While I was writing this album I was in a really transitional place – transitional state of mind, transitional musically, and literally on the move. I wrote a lot of this album while I was on tour, in the car, or just in motion. I think with all of that combined I was in a weird place, but now I’m kinda good. I was definitely going through some phases with it like dealing with the stresses of trying to make it as an artist and a musician. I think a lot of the music on this album is me reassuring myself like, “Shit’s gonna be okay,” and “This is a worthwhile endeavor.” I say it as if I’m giving the advice to somebody else but I’m really talking to myself and the audience at the same time. I’m definitely in a good headspace now, but while making it I was going through a lot of different phases. I went from a good space, to a bad space, to breaking up with a girl, to getting back together with her, and all that type of shit that goes along with being a traveling artist and a traveling musician.

TRHH: How is Drifters different from your last solo project Waves?

ProbCause: I think I’m a lot more involved with this album than Waves or any other project. I produced a few tracks on it, I’m singing on it, and I did all the artwork for it – which I guess I did on Waves, too. It’s a lot more musical so I was bringing in musicians, but I was dictating what I wanted them to play. I was writing the music for them to play. I was just really involved. I didn’t have a specific idea for the entire album, but song by song I kind of knew what I was going for with each piece. I think it’s a lot more musical and the production is a lot bigger. Not to take away from it, but I feel like Waves was tracks. It was one track, two tracks, three tracks, this is an album – these are songs. These are compositions more than they are tracks. It’s not just me rapping over beats. I really took the time to try to write songs with it, but it’s a little more musical and well thought out.

TRHH: Earlier this year you released your project with Psalm One, “ZRO Fox”. What was that experience like working with her?

ProbCause: It was cool, man. It was pretty natural, pretty organic. We’ve known each other for a long time. It was just us being in the lab together which was something that wasn’t abnormal. It was fun. I think we could make a full album that’s even better than the project that we put out. We kept a few of the tracks that we had made just because we wanted to give people a taste of it. We wanted to sit back, work, and take our time with something bigger. It was kind of a little teaser of what we’re capable of. It’s fun to work with her. We worked on songs together before so we knew we could hit a lot of things we wanted to hit on. It was a fun experience. Being in the lab with her was a cool thing.

TRHH: You guys kind of bridged the gap of Chicago rap when you brought in Sasha Go Hard on “Might Not“….

TRHH: Do you feel like the unity, for lack of a better word, in the Chicago rap scene is growing?

ProbCause: It’s growing and it’s distancing itself. I think it changes and it breathes. I think there are groups of cats that fuck with each other and there are groups of cats that don’t fuck with each other. I think the city is more open to collaborations than it was 5-6 years ago. The nature of Hip-Hop is so competitive that it’ll never be like, “We’re all friends, family, and cool.” Greg, who is Chance’s drummer Stix has this thing called “Jam Night” that he does every month. It’s basically like all my favorite rappers in the city, musicians, and people that are involved in the music scene all in one place. I think there are certain communities that come together in certain instances, but then there are other instances where people don’t know one another exists or they don’t fuck with each other. That’s just the nature of being in a city as segregated as Chicago.

TRHH: Gramatik produced “Back to the Future” on the new EP. How did you end up working with Gramatik and becoming part of the Lowtemp label?

ProbCause: It’s actually kind of a crazy story. We played a festival in Costa Rica together last summer. He was working with this group called Exmag who I work with too now. They saw my set and said, “That was really cool, man. We should do some shit.” I didn’t know who any of them were. They invited us back to this spot that they were staying at. Gramatik was the headliner of the tour and they were all staying in this crazy, beautiful, house on the beach. We ended up crashing at their spot and all becoming homies over the course of the weekend in Costa Rica. We just listened to music and vibed out and shit.

After that we just all stayed in touch and started sending shit back and forth. We made a couple tracks and then Gramatik reached out to me to do this song “Monster Stomp” which we put out like six months ago and that shit went over really well. I ended up doing some tour dates with him and one thing basically led to another. We have three or four unreleased tracks, too. That was just the first one that we put out. It just made sense to put it out on his label. He had been tossing me beats, giving me feedback on new songs, and fuckin’ with my vibe. So it just made sense to have him distribute the album, help me put it out, and give me a different platform to get it out to the world.

TRHH: You’re performing at North Coast Music Festival again this weekend and they’re billing you as an “Artist at Large”. What exactly does that mean…..

TRHH: What can fans expect to hear on Drifters?

ProbCause: Man, a whole new barrage of styles from me. From content, to flows, to everything. I think on “I Feel U” people saw a different side of me that was a little more aggravated and aggressive and attacking the song from a different angle. You can expect a lot of that on the album. It’s a lot more experimenting with different flows, using my voice in a lot of different ways, and singing a little bit. The beat styles and production choices are definitely much different than Waves was. It’s kind of in a different area of the game so it’s kind of electronic, jazzy, trappy, and touches on all these different genres and finds a way to weave them in to each other. It’s an album that I’m really proud of. I think it’s the best music that I’ve ever made.

Sherron Shabazz is a freelance writer with an intense passion for Hip-Hop culture. Sherron is your quintessential Hip-Hop snob, seeking to advance the future of the culture while fondly remembering its past.
View all posts by Sherron Shabazz →
This entry was posted in interview and tagged Back to the Future, Chicago, Drifters, I Feel U, interview, Lowtemp, Might Not, North Coast Music Festival, ProbCause, Waves, ZRO Fox. Bookmark the permalink.