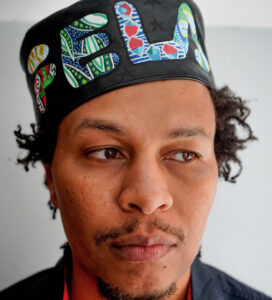 Photo courtesy of Cos G

The Real Hip-Hop spoke to Pugs Atomz about working with other artists from Chicago, why social change looks bleak in the United States, and his new album, Test Drive.

TRHH: Why’d you choose a vehicle theme for this album?

TRHH: I never looked at life as a test drive. That’s different.

Pugz Atomz: Think about how many times your friends may change their life force or your family might change careers. You’re like, “Oh wow, okay. That’s what you’re gonna do.” But it works out and you’re like, “Okay, fair enough.”

TRHH: The title track is another one of those feel good type songs. It seems like it would be perfect for a live performance. Have you been able to perform the song live yet?

Pugs Atomz: I’ve been holding off on that, but I’ve been doing quite a few online live performance things. For this album I’m going to do at least one live thing, depending on how the COVID rules play out.

TRHH: Rockie Fresh and Chris Crack appear on the album; did you go into this project wanting to reach out and work with other artists from Chicago that you normally wouldn’t work with?

Pugs Atomz: I never really go into it with any type of predetermined thing. Most times I hear a beat or I’m already working with the artist on something else and I’m like, “You should just slide through the studio.” With Rockie Fresh it was more the beat. I thought he would sound dope on it. Tusk57, the producer also thought he’d be dope on it and he had more of a relationship with him and we worked that out and did it. With Chris Crack, I had just did the “Rose Gold Cutlery” record for his album. So, literally the next week he slid through the studio and we recorded a few records. This is the first one to get out there. Often times when making songs I think, “Bla bla bla would sound dope on this.”

TRHH: “Parked by the Lake” is such a Chicago song in the beat, the lyrics and the title. Did you hear that beat and envision yourself on the lakefront?

Pugs Atomz: That’s my favorite. Yeah, man. It’s a real story of me and my wife Skyping, to going to the Black Women’s Expo when I first moved back to Chicago, and just falling in love with her again.

TRHH: Is that why it’s your favorite? Because it’s so personal?

Pugs Atomz: I think so. I just really liked that beat. When I heard that beat it said something to me. When Waffle King sends me beats he sends like twenty beats, but that just cut through so hard.

TRHH: On another note, the song “Sunsets in the U.S.A.” sounds pessimistic to me. Why do you think social change looks bleak in the United States?

Pugs Atomz: Just because it’s a long process. There is no button we hit and it’s all fixed. It’s a constant re-teaching that people have to kind of go through and be aware. If you look at the history of the United States, you go through these periods of being hyper-aware that things are messed up and then we go back to, “Oh, everything is fine.”

Pugs Atomz: People forget. They go back to their lives. The same problems are here. They have changed. Chicago has consistently been violent. People are complaining like this is a super-new problem.

Pugs Atomz: Even looking at the documentaries from the 60s and 70s about the different gangs and if you go to Al Capone’s time you see there is a serious thing that keeps happening.

TRHH: How do we fix that?

Pugs Atomz: I don’t think it’s an easy answer. I think everybody realizing and admitting it and not claiming it’s some new thing would really work to fix it. Part of it is opportunity in disenfranchised neighborhoods. The other part is everybody owning that it’s a problem and we all are responsible. Think about when you see somebody getting beat up now, everybody pulls out their phone. Nobody says, “Hey, maybe I should jump in.”

TRHH: Yeah, that’s some different shit. Why is that? I don’t understand that fully.

Pugs Atomz: I think to a point we fetishize violence. From video games to movies. It’s easier just to watch I guess. Or maybe people don’t know that they should say, “don’t do that.” I don’t know.

TRHH: I have no idea, man. It’s sad. When I was in high school I bumped into these dudes I was into it with. Somebody punched me from behind and these guys jumped me. All I remember was these girls laughing. They were cracking up. I took off and ran into the school. For some reasons the girls laughing stuck in my head. I think it’s the same kind of thing with the phones now. Why is that funny?

TRHH: None! Is it funny if it happens to you? Or your family members?

Pugs Atomz: Then it’s not funny at all. I did the Parade of Hearts where they picked eleven artists to paint these five-foot heart sculptures. It’s through the Luv Institute and they do peace circles and a lot of problem-solving initiatives. Their goal is to spread love. With the think tank I had, the kids looked like they were maybe twelve to fifteen. They kept saying “respect” “I need more respect” and “I need to feel safe.” Those were the things that they kept telling me when figuring out how to create this image based off their feedback. I’m like, if they’re saying that, that means this is a universal problem.

TRHH: Respect in what manner?

Pugs Atomz: In all manners. Respect of the cops and the shooter to respect life. Just respecting life. If you respect life it’s only so far you’ll go because you don’t want to see somebody else get got. You’re like, “Hey, those guys are about to beat you up. You should probably run.” Something as simple as that.

TRHH: I think there is something lost with how communities ain’t communities anymore. There is no looking out for each other. It’s every man for himself.

Pugs Atomz: It seems like with the crack epidemic that’s when it went awry. It was already gone awry, but that seems like the line of everything changing.

TRHH: I was talking about this with someone recently. I feel like things went awry when black people wanted to integrate. You don’t hear about black on black violence in the 30s, 40s, and 50s. You hear about thriving businesses, communities, and common causes.

Pugs Atomz: That’s the whole thing of shopping local. That’s what I used to love about Englewood. Even though not all of the businesses were black businesses, they were businesses that you could walk to. You didn’t have to leave your community to buy stuff. Now we’re definitely in a place where you have to leave, call, or Instacart if you don’t live in a great neighborhood.

TRHH: “Malcolm 64” is a reflective song. At this point in your career are you able to look back on some of your accomplishments in music and appreciate them?

Pugs Atomz: Yeah. Definitely. I think for me it’s a special case just because with all the stuff I’ve done I never saw it happening, it just happened and I was like, “Oh, wow. That’s cool.” It worked out. I didn’t have a “I’m gonna do this while I’m rapping.” I love rapping, I’m going to continue to rap, and what comes of it, comes of it. It was never really about making money. It was part of the art that I really loved and it was working. I was getting out these feelings, thoughts, and ideas. A release.

TRHH: What do you hope to achieve with Test Drive?

Pugs Atomz: It’s always to gain new listeners. Also, I think this time I’m definitely painting a picture of the good and the bad. Giving some understanding within the record and showing the emotional sides of a black man. It’s not all one way.

Sherron Shabazz is a freelance writer with an intense passion for Hip-Hop culture. Sherron is your quintessential Hip-Hop snob, seeking to advance the future of the culture while fondly remembering its past.
View all posts by Sherron Shabazz →
This entry was posted in interview and tagged 600 Block Records, Chicago, Illinois, interview, Malcolm 64, Parked by the Lake, Pugs Atomz, Sunsets in the U.S.A., Test Drive. Bookmark the permalink.