Ras Beats: Control Your Own 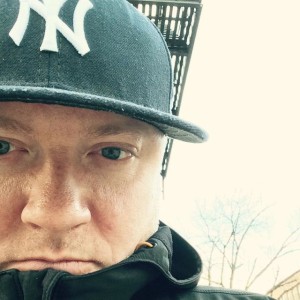 Born in Denmark and raised in Queens, New York Ras Beats continues the East Coast tradition of making that old boom bap. His sample-based sound provides a feeling from a past era with a modern day appeal. Ras Beats’ work is on full display on his newly released album on Worldwyde Recordings, Control Your Own.

Ras Beats spoke to The Real Hip-Hop about his beginnings in beat-making, the current sound of mainstream Hip-Hop, and his new album, Control Your Own.

TRHH: Explain the title of the album, Control Your Own.

Ras Beats: That came from a conversation I was having, actually. We were talking about some real life stuff at the moment and I said, “You gotta control your own,” and when I said that I thought that should be the name of the album. When it comes to the album it’s in reference to this album being independent and making sure you control your own music, the sound of it, and the integrity of your music. On a larger scale as a grown person, you may not be able to control a lot of this necessarily on the outside but you can control how you act, your own morals, and your behavior. That’s something that means something to me and that’s the meaning behind the title.

TRHH: What made you decide to do a producers album?

Ras Beats: I’m always making beats, listening to music, looking for samples, chopping them up and all that stuff. I came to a point where there were some great producer albums out there but I wanted to add my two cents. It’s something I had thought about for a while and it got to the point it was inevitable and I had to do it. Also to put some good music out there and kinda get busy with it. It’s something I had an idea with for a while but I kind of went back and forth, but I had to do this. I started working on it and that was it.

TRHH: Tell me about the first single, Wit No Pressure.

Ras Beats: When I decided I wanted to make an album Roc Marciano was one of the guys I had to get on there. He’s one of my favorites. He’s an emcee so you want to make sure as a producer that you do your best when you get him on a record. I came up with the beat and it was for Roc. I was fortunate enough that I knew him and we made it happen. It felt like a good way to start the album.

Ras Beats: Probably the same story as a lot of people that do beats in my kind of style – sampling and chopping them up and all that. For me it came from just looking for old records, listening to music and being like, “Oh, that’s where such and such got the sample from!” My knowledge started expanding from there and after a while I decided to make something on my own. Like anything else you start working on your craft and you get to a point where you start making songs. It was very organic. I was a fan of music then I started making my own and going from there.

TRHH: What’s your take on the keyboard sound that has taken over Hip-Hop in recent years?

Ras Beats: That’s a tough one. At this point I think I’ve gotten into the mindset that if I don’t like something I don’t really listen to it. It sounds cliché, but if it’s good it’s good. I just always liked my Hip-Hop to be funky. I like it to have a certain grit and grime to it – something that affects you in a way that no other music affects you when you hear that first couple bars. To me it’s not that much keyboard production that gives me that feeling. Not that it necessarily has to be based on samples but there is a certain feel that that type of production gives you that I don’t personally hear in the cleaner keyboard sound. I like it a little grittier, personally. With that being said there is some stuff played on keyboard that still has that feel to it, but to my ears it’s not all that much that has it. It’s personally what I like listening to.

TRHH: What is your workstation of choice?

Ras Beats: I keep it really simple. I got my turntables set up and I got my Akai MPC 2500 next to it. That way I hear something, get inspired or am in that mood I can kind of get going in ten seconds. I do it on the 2500 at first and then go to Pro Tools when it’s time to record and mix. It’s the 2500 and I have a little keyboard hooked up to it – not so much for keyboard beats but for any samples I want to manipulate. I basically try to work with the samples and do my own take on it. I find something I want to work with and change around enough to where it’s mine now. I think the science behind it is if you find some incredible record to sample you have to add on to it and make it more than what it was when you heard it.

TRHH: How did the new single, Knowledge of Self with Elzhi and O.C. come about?

Ras Beats: I got the verse from Elzhi and I wanted to finish it up with somebody that could match what he was talking about. Elzhi is saying some things in there and you can’t just put anybody on the record next to him. O.C. was somebody that came to mind. I knew he could bring that home from there. A.G., who is also on my album was able to put me in contact with O.C., and he heard the record and was down with it.

TRHH: Do you have a favorite verse on Control Your Own?

Ras Beats: [Laughs] A lot of people ask me about my favorite songs and favorite verses. I don’t think I have one. It changes from day to day. The O.C. verse is pretty incredible. Off the top of my head I’d have to say that verse but I’m really happy with what everybody gave me on that album. Everybody that’s on there definitely came through and I really appreciate that. If you ask me tomorrow it’s going to be a different verse [laughs].

Ras Beats: Oohh, that’s tough. I might have to think about that. I don’t know.

TRHH: Who is Control Your Own made for?

Purchase: Ras Beats – Control Your Own

Sherron Shabazz is a freelance writer with an intense passion for Hip-Hop culture. Sherron is your quintessential Hip-Hop snob, seeking to advance the future of the culture while fondly remembering its past.
View all posts by Sherron Shabazz →
This entry was posted in interview and tagged Control Your Own, Denmark, interview, Knowledge of Self, New York, producer, Queens, Ras Beats, Wit No Pressure, Worldwyde Recordings. Bookmark the permalink.