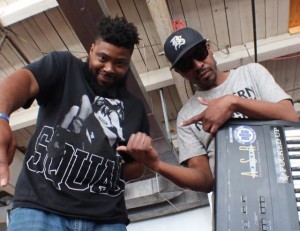 Twenty-five years ago the film Boyz N The Hood was released and it launched the careers of several young actors, most notably Hip-Hop’s very own Ice Cube. A coming of age film set in South Central, Los Angeles, Boyz N The Hood centered around the lives of three young men – Doughboy, Ricky, and Tre. The calming, no-nonsense, father figure in the film played by Laurence Fishburne was named “Furious Styles.”

Furious Styles is also the name of new joint album from Philadelphia emcee Reef the Lost Cauze and producer Bear-One. The title of the album is indicative of Reef’s status and outlook in the game of rap. Furious Styles is produced entirely by Bear-One and features appearances by REDiROC, Peedi Crakk, STS, Truck North, and Slaughter Rico.

The Real Hip-Hop spoke to Reef the Lost Cauze about his writing process, what it was like to work with Bear-One, and their new album, Furious Styles.

TRHH: How did you link up with Bear-One to do Furious Styles?

Reef the Lost Cauze: Bear has been a friend and an OG that I’ve known for about 12 years. He was always doing his thing around Philly. We recorded some tracks together for different projects and collaborations for other artists. We had a few tracks of our own in the cut and we decided one day to get the project poppin’. I hate to use the word “organic” because I feel like so many people have used it, but this is one of those projects where that was my friend first. That was my man and he just happened to be a great producer. He respected me as an emcee and we moved from there.

TRHH: How long did it take you to complete the album?

Reef the Lost Cauze: Once we got going it was off and on because we both had a lot of stuff going on. I’d say it was about a year. Some of the tracks were recorded over the last 4-5 years. We just added maybe 5-6 new joints and kept it moving like that.

TRHH: How was doing this album different from doing an Army of the Pharaohs or JuJu Mob album?

Reef the Lost Cauze: This is actually my twelfth solo album. Every time I work with an artist or a producer on my own project it’s my show, as opposed to an Army of the Pharaohs or JuJu Mob. Those are group projects. I play the role of making sure everybody else’s vision is respected and I’m able to feed off of other people’s energy. When it’s just you and the producer and it’s your project you’re able to do a lot more, have a lot more fun, with a lot more freedom. No constraints. You’re running the show.

TRHH: Why did you title the album Furious Styles?

Reef the Lost Cauze: I always loved that name and it just fit with the ferociousness. It’s a very raw project. Also I am Furious Styles. I’m an OG now. I’m an old head. I got my two sons and in the hood I’m constantly spouting wisdom to the young boys but I’ll also give you hell. Those things all combined and lined up for that title.

TRHH: Tell me about the single All Ours.

Reef the Lost Cauze: All Ours is a joint with my man REDiROC from a crew called Ape Gang, which is a crew out of North Philly that’s really repping. He’s an artist that Bear has worked with for a long time. We just got in the studio, Bear made the track, which is a gritty soul sample, and we just got together and knocked it out.

TRHH: What’s your writing process like? Do you write rhymes as they come to you or do you write to the beat?

Reef the Lost Cauze: When I had a lot more time on my hands I would just write, and write, and write. Now it’s more or less when I hear a beat that really strikes the mood and gets me inspired I’ll sit down and start writing. I’ll always try to keep a pen and pad or a recorder close by for when I think of some rhymes. As far as writing to music, it’s usually the beat that does it first.

TRHH: What inspired the song You Know Me Well?

Reef the Lost Cauze: Aw man, the beat was just so sinister. When I heard it the first time I just went in. It’s just basically a testament to the skill and art form of raw Hip-Hop. I couldn’t wait to get that out there to the people.

Reef the Lost Cauze: It’s the perfect marriage of music and rhyme. It’s one of those things that when I started writing right away it spoke to me. I heard the beat and went right in on it.

TRHH: Who is Furious Styles for?

Reef the Lost Cauze: Furious Styles is for people that appreciate that raw, gritty, street, Hip-Hop. I make music depending on moods and who I’m working with. That’s the mood I was in and Bear’s style is the style I gravitated to for that project. I’m not a one trick pony. If you listen to any of my projects it’s different vibes and different moods for each palate that the producer lays out for me. This is just for that and that’s why we went with that title and that’s the vibe we’re coming with. It’s a heater. Short and sweet, punch you in the face, get in and get out. I think people will dig it. It’s the perfect summer time wild out music and Bears beats are incredible.

Sherron Shabazz is a freelance writer with an intense passion for Hip-Hop culture. Sherron is your quintessential Hip-Hop snob, seeking to advance the future of the culture while fondly remembering its past.
View all posts by Sherron Shabazz →
This entry was posted in interview and tagged All Ours, Army of the Pharaohs, Bear-One, Furious Styles, interview, JuJu Mob, Pennsylvania, Philadelphia, Reef the Lost Cauze, You Know Me Well. Bookmark the permalink.