Posted on September 26, 2016 by Sherron Shabazz 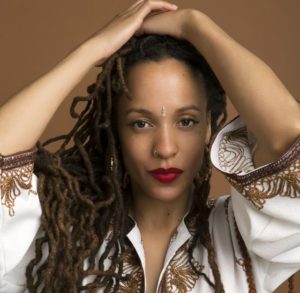 With over a dozen releases under her belt in just a brief amount of time Sa-Roc has solidified her position as one of the most though-provoking emcees in Hip-Hop. The titles of her projects and songs pay tribute to great civilizations and icons throughout history. Her lyrics harken back to the days when the emcee made the listener say, “Yo, rewind that!”

The Washington D.C. native released a mixtape in mid-2016 titled “MetaMorpheus Mixtape.” The free mixtape combined classic Sa-Roc material with new songs to serve as a reminder and an appetizer for her fall release, MetaMorpheus. MetaMorpheus is a five-song EP released by Rhymesayers Entertainment. The project is produced by long time Sa-Roc collaborator, Sol Messiah and Gensu Dean of Mello Music Group.

The Real Hip-Hop spoke to Sa-Roc about the upcoming U.S. Presidential election, why boom bap will never die, and her new EP, MetaMorpheus.

TRHH: What’s the meaning behind the title of the new EP, MetaMorpheus?

Sa-Roc: MetaMorpheus is a play on two words, metamorphosis obviously, and Morpheus. I’m a big fan of The Matrix. Morpheus is one of those characters that if you read more deeply into the unwritten part of the script of the movie, he thought he was the one but it turned out that he wasn’t. Essentially he wasn’t the one because he didn’t believe that he was the one. He believed that someone else outside of him was more capable of carrying out or shouldering that power. The idea of MetaMorpheus is the transition or development of one’s self from a being of untapped potential to one that blossom’s into the one that’s capable of anything.

TRHH: So do you see yourself as the one?

TRHH: What’s the inspiration being the EP’s title track?

Sa-Roc: That kind of speaks to that whole transformation bit. It’s somewhat autobiographical but it can be applied to anyone in a sense that as we go through life we transform from our beginnings into something. In particular this one speaks to an experience coming from a beginning in inner-city neighborhoods where it can be a struggle trying to get out of that environment mentally and physically – and all the challenges that you face trying to do that. In the hook we say, “We’re more than just a city,” we’re capable of more than this existence that seeks to define us, shape us, and keep us trapped — It just kind of talks about developing ones potential beyond environment.

TRHH: Your music has always been filled with references to past great civilizations and people. Where exactly does that come from when you’re writing?

Sa-Roc: I’m a student of history and culture. I’ve always been exposed to that very early on. I went to a school that taught Pan African centered education so we learned about great empires, specifically great empires of the east. That’s always resonated with me and I’ve always had an alignment with ancient and modern eastern culture, from Africa to Asia. That greatly influences my writing and my rhymes.

TRHH: Do you write to the beat or when rhymes come to you?

Sa-Roc: I have lines that I’ll write down when I think of them. I have written songs off the top with no beat or with a tempo or a skeleton beat that I’ll find off the internet. Sol Messiah might create a beat with the same BPM as that beat and I can rap over it. I’ve done different things, but mostly I catch a vibe off of a beat that’s already been created.

TRHH: On the song Eye of the Phoenix you snapped! Talk about how that song came together.

Sa-Roc: Why thank you. That actually was produced by a compadre of ours, Gensu Dean from Mello Music Group. We met him through David Banner and we always kind of wanted to work together. He sent over the track and I just vibed over it. We made history [laughs].

TRHH: The music that you rhyme over can be considered boom bap. In recent years a lot of newer artists have called that sound old or dated. What’s your take on that?

Sa-Roc: [Laughs] Well good music to me can never be dated. We live in a fast food age. As the internet progresses and is more accessible to people, certain internet applications and programs are more accessible. So you have programs like Fruity Loops and Garage Band on every phone, which makes it really easy to learn how to produce. You have a lot of up and coming producers who are creating, in my opinion, fast food beats. Then you get fast food rappers who’ve only practiced or been trained on fast food beats. There’s only so far that you can go so it becomes more difficult and complex to rap over a quote unquote “old school” or “boom bap” beat. I think the attempt to stigmatize boom bap is just an attempt from people who have a little less talent, aren’t able to articulate themselves, and aren’t able to ride the beat the way they can some of these more simplistic beats. I think that’s where some of that comes from.

TRHH: That’s an excellent answer. I’m so glad you said that [laughs]. That’s one of those things that’s been annoying me so much. I’m 40 years old so boom bap is everything to me. I try to listen to the new stuff and it’s not for me. You know Dante Ross, right?

TRHH: He’s an executive. He helped discover De La Soul, Brand Nubian, and some other people from the late 80s and early 90s. He’s a white guy from New York. He tweeted “When did real Hip Hop come to mean dated boom bap?” and I was like, “Nah, not you!” I’ve heard that a lot recently and it’s really surprising to me.

Sa-Roc: That’s the thing, a lot of these mature cats don’t want themselves to be labeled as old or in the past so they try to ride the wave of what’s new, current, and popular. They start dissing or trying to minimize what they came up on, and what some of them even rapped over or produced. I just feel like it’s definitely political to try to stay in the loop because that’s what they’re pushing right now. They’re pushing this… this drivel.

TRHH: [Laughs] That’s a good word for it. It’s kind of sad. What’s your opinion on the upcoming Presidential election?

Sa-Roc: [Laughs] I generally don’t get into politics, but let’s just say I’m not really happy with either of the candidates. We have more pull and the more potential to exercise our power with local and grassroots elections. So it’s important to be a part of electing local sheriffs, councilmen, and mayor’s to actually exercise your political power. Both parties in my opinion are a train wreck. I don’t necessarily believe in voting for the lesser of two evils because either way you’re still voting for evil. It’s interesting. It’s certainly once again called into the question of the age old practices of these two political behemoths and why there can’t be any other party on the main platform or the main stage whose voice can be heard.

We’ve seen with Bernie Sanders how that quickly kind of got squashed. A lot of his platform was opposed to Hillary but because he’s part of the Democratic Party he had to acquiesce to her. I don’t want to say she bested him, but they pushed her because they wanted her to represent the party and not Bernie Sanders. Again, I believe it’s really important to exercise your influence over local government. That’s where I believe we as a people have the most power. But definitely keep abreast on what’s going on and if you feel compelled to vote for either of the two candidates, do you. I feel like both candidates are a train wreck, for sure.

TRHH: What about the Green Party candidate and the Libertarian candidate? Are you up on Jill Stein and Gary Johnson?

Sa-Roc: I’ve heard some things about Jill Stein. I’m not completely solid on her platform.

TRHH: I feel you. I’m voting for Jill Stein. I mean, we lived through Bush but I don’t recall the candidates ever being this bad. This is the best that they could produce? It’s kind of sad.

TRHH: How is the MetaMorpheus EP different from your other material?

Sa-Roc: I guess it’s different in a sense that I’m just in a different space musically. Every project that I produce I feel like I advance creatively. I think it’s consistent with most if not all of my projects that I present a pretty diverse offering of what I can do as an artist. MetaMorpheus is more a sentimental kind of vibe, then I’ll have hard hitting and gritty deliveries on songs like “Cthulhu’s Revenge” and “Eye of the Phoenix” and I do a little melodies and singing and stuff. I think it’s consistent as far as artistic caliber for sure. I’m just at a different stage creatively in my career.

TRHH: What’s next up for Sa-Roc?

Sa-Roc: Working on a new album. We’re actually starting that now. The fall continues with shows and performing. We’re just going to continue to put out more content and videos. I really, really wanna focus on this new album that we’re gonna be releasing probably in 2017. We’ve got some heavy hitters on this one. Musicians who’ve worked on some Dungeon Family stuff and some really dope singers and writers. I’m really excited about the way that this project is going to be developed and I’m really excited about it being launched with Rhymesayers because they are consistently taking care with my offerings and what I present to the world in their platform. That’s my main thing, just to keep moving forward and increasing visibility.

Sherron Shabazz is a freelance writer with an intense passion for Hip-Hop culture. Sherron is your quintessential Hip-Hop snob, seeking to advance the future of the culture while fondly remembering its past.
View all posts by Sherron Shabazz →
This entry was posted in interview and tagged Atlanta, EP, Eye of the Phoenix Rhymesayers Entertainment, Georgia, interview, MetaMorpheus, Sa-Roc, Washington D.C.. Bookmark the permalink.