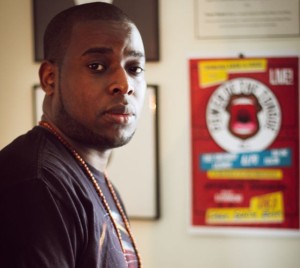 North Carolina emcee K-Hill teamed up with Australian producer Debonair P for a new EP titled, “Truck Jewels & Filters”. The release is reminiscent of 90s era Hip-Hop, with substantive spitting and boom bap beats. The EP is produced entirely by Debonair P complete with remixes of the original tracks and guest appearances from emcees Omniscence and Prince Po.

K-Hill: Debonair P from Australia sent over a couple of instrumentals for me to check out. I noticed he had that golden era sound where they used to filter a lot of the samples to fill the bass lines out. The type of emcee I am I like to drop a lot knowledge in my verses. I like having punch lines, metaphors, and dope lines, but I also like to say something that can inspire people, something that might describe an experience that I’ve been through – we call those jewels. That’s how I came up with the title, Truck Jewels & Filters, because I knew I was going to be dropping jewels on the project and I knew that he was going to be bringing boom bap, filtered bass lines, and hard knocking beats to the project. I represent the truck jewels part and Debonair P represents the filters part.

TRHH: How’d you wind up hooking up with Debonair P?

K-Hill: Wow, man. I’m glad you asked me that because I always wanted to tell this story. A couple of years ago when I was at A&T I used to check out their radio station and a couple of the radio stations in Greensboro. They used to play this artist named Omniscence. He had a song called ‘Amazin’’ and this song was so crazy. They used to play this song all the time and I loved the jam because he was just spitting bar after bar after bar. I’m like, “Man, that guy is so dope.” Come to find out later on that he’s from North Carolina. I didn’t know he was an artist from North Carolina, I just thought he was a new artist on the come-up that was on the radio. After I did a little research I found out he got signed to Elektra Records and got Rhyme of the Month in The Source. Here’s a cat from North Carolina that is on the radio and he got Rhyme of the Month in The Source, if he can do it, I can do it.

Fast forward a couple years later I’m on Facebook and somebody tagged him and I’m like, “Dag, this can’t be the same cat?” So hit him up and found out it was Omniscence. You know how rappers like to do, we don’t like to talk a lot so I just said, “Hey man, respect. I been a fan forever.” I didn’t expect anything back and he hit me back like, “I’m a fan of your music!” He said he’d been following me for a couple of years and after that we just clicked up. He was telling me he had a project with this cat Debonair P from Australia and he wanted me to be on it. We started talking later on and I said, “That’s a sweet deal that you’ve got. You got your 12-inch and your music out there, that’s a sweet lil’ deal.” He told Debonair P about me and passed on the contacts. That’s how me and Debonair P linked up. We linked up because an artist who I am a fan of and admire hooked me up on the humbug. That was love man. I’m forever indebted to that cat.

TRHH: Given that you’re a producer was it difficult for you to let Debonair P handle the beats on this project?

K-Hill: [Laughs] It’s always difficult because as a producer you’ll always hear some stuff that you want to change with the beat, drop this, take this out, or add this element. This man is basically overseeing the whole project so Im’ma do this thing. I’m a guest in his house so I just sat back and let him do his thing. I’m happy with what we got accomplished.

TRHH: Tell me about the single ‘Whenever I Write’.

K-Hill: Wow, man. There are two versions. When I heard the remixed version I thought it’s only a golden era sound but it’s also that classic North Carolina Hip-Hop sound. It got that Mark Sparks and Ski Beatz sound that was out back in the day. We call it ‘Cackalack Raw’. I don’t know how Debonair P tapped into that sound but I always wanted to rock something to that sound, I just never had the opportunity. I selected that joint and didn’t really have a concept for the song. I just wanted to have some nice punch lines and a good feel to it so I just called it ‘Whenever I Write’ [laughs]. That’s all it was, it was just a spitter.

TRHH: Why was every song remixed on this project?

K-Hill: That’s Debonair P flexing his muscles as a producer. Back in the day whenever artists dropped a single they’d drop a 12-inch and there would be several versions on it. There would be the original version and then there would be either the Pete Rock remix, the Marley Marl remix, the Buckwild remix, or somebody else’s remix. He just wanted to bring that feel back, man. He comes off like an old soul to me. He’s going back to the essence, even with the way he releases music. He does that with every project that he does. I definitely ain’t got nothing against that.

TRHH: You’ve been around a long time. What’s the most valuable lesson you’ve learned in the music business?

K-Hill: Man listen, remain humble. Always help people who are going to help somebody else. That’s the only way you’re going to keep your legacy alive. You can’t shut the door on anybody. If they’re talented and you see they got that gift, help ‘em out. You don’t owe anybody anything, nobody owes you anything, but stay humble. Never forget the people that looked out for you when you were on the come-up because you’re going to see those same people again, whether they be up there with you or whether you’re on your way back down. Just help people, man. You don’t have to be foolish about it, but if you see somebody that got something to offer to this game help ‘em out. That’s the most valuable lesson I’ve learned.

TRHH: What changes have you seen in the North Carolina Hip-Hop scene with the emergence of acts like Little Brother, the Jamla crew, J. Cole, and others?

K-Hill: Right now I’m working a deal on the table with Elementality. They’re doing a re-release of my project Stamps of Approval that came out almost a decade ago. I’m working on a brand new album with them, it’s going to be the full-length Achilles Hill project. I’ll probably put out another remix of Truck Jewels & Filters with some up and coming artists that are really dope. I’ll also drop a couple of loosies here and there until my full release comes out. New opportunities are coming through every day, man.

Sherron Shabazz is a freelance writer with an intense passion for Hip-Hop culture. Sherron is your quintessential Hip-Hop snob, seeking to advance the future of the culture while fondly remembering its past.
View all posts by Sherron Shabazz →
This entry was posted in interview and tagged Australia, Debonair P, EP, interview, K-Hill, K-Hill & Debonair P, North Carolina, Truck Jewels & Filters, Whenever I Write. Bookmark the permalink.