Scofield: The Legend of Scofield 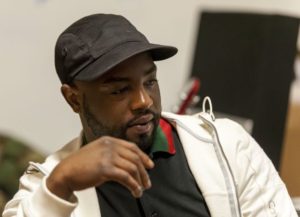 Scofield is am emcee from the west side of Chicago. His music is much like the everyday citizens of Chicago, blue collar and relatable. Scofield’s rap career began as a member of a super lyrical crew called Deepsicks and he has now broken off on his own. To introduce fans to himself as a solo artist Scofield released a full-length album titled, “The Legend of Scofield.”

The Real Hip-Hop spoke to Scofield about becoming a solo artist, the lack of a distinct sound in the Chicago music scene, and his new album, The Legend of Scofield.

TRHH: Why did you title the album ‘The Legend of Scofield’?

Scofield: It’s basically a nickname and a brief look into my psyche, my demeanor, and what makes up Scofield. I got a lot of friends that call me “Sco” or “Uncle Sco” so it was kind of a play on words. I just wanted to have an introduction to this facet of my character.

TRHH: The song ‘No Problemz’ has a battle rap feel to it. Do you come from a battling background?

Scofield: Not necessarily. Kind of, sort of, but not really. When I was younger I was in a group called Deepsicks. We battled our fair share of groups around the city and when we went to college we battled guys in college. One of the guys in my group, Jah Safe, actually won the Rhymespitters freestyle battle two years in a row. Another guy that’s affiliated with us named Vitamen D won it another year. I’m always around battle rappers, but I would probably consider myself more of a writer. I’ve been around battle rap since the beginning. I wouldn’t consider No Problemz a battle rap, I would consider it an in your face spitter type song.

TRHH: How is working on solo material different from working with Deepsicks?

Scofield: Working in a group your duties are kind of limited. It was three of us so I was really only responsible for coming up with a hook and then a verse, or just my verse. Working on the solo side it’s the first time you really get a chance to be yourself and you’re developing full songs, verse to verse, hook to hook. You’re developing a vision in terms of the overall feel of the project and what the direction is going to be sonically. It’s a lot more difficult, but it’s also more gratifying because it’s a chance to tell your story firsthand. It’s a chance to have your imprint on a song fully 100% without having to compromise. A lot of times working in a group you may not even like the beat that you’re rapping over or performing to. But for the collective cause of what we’re trying to do you will take those steps to accommodate and challenge yourself as an artist.

When you’re doing a project solo you’re picking all the music, you’re picking what the tone of the song is going to be, what the concept is going to be, the title, everything. It’s much more of a gratifying effort working on the solo side, but at the same time stepping out of the shadow of the group and not having the crutch of “all I gotta do is write a 16” now I gotta write two or three 16s and now I gotta come up with a hook. From a challenging standpoint it’s gratifying from that stance because it’s 100% you. There isn’t anybody else that’s factored in on the development of that song or that project.

TRHH: You’ve been doing this a while and you’re a college-educated guy, what has kept you going in the music business?

For me it was just a timing scenario where I had the time, I had the resources, and I had the drive to complete a project that I thought would resonate with the general public. At the end of the day in the landscape of music that we’re in today, the style that I put out there is not really the norm. For me it was an opportunity to try to keep that alive and say there are definitely still artists out here that care about the marriage of the lyrics and the beat, their concepts, and the message that they’re putting in their music. I just took it upon myself to say, “If I have a voice I’m going to do it.” Until somebody tells me don’t do it anymore I’m always going to be involved in it.

Scofield: It was a cool out song. The gentleman that I actually recorded this with who did all the mixing and mastering of the project, his name is Cysion. We met in Detroit and have been around each other from a music standpoint for a number of years. I had a track that I wanted him to be on and I wanted him to do something different. He’s definitely from the ilk of the battle rhyming and that whole Detroit Hip-Hop scene. I didn’t necessarily want him to do that, I wanted him to do something different. I challenged him to write a verse for the song that was more atypical of what he would normally do.

It’s just like a celebratory song. It’s a cool out song. It’s me talking about hanging out and being a Chicago guy. It’s him telling the same story from a Detroit perspective. When we collaborated on the chorus it’s more of a metro Chicago thing when I’m going into European flagships and so forth and so on, and he’s talking about Detroit Muscle. It was just two world’s coming together saying this how we vibe, hang out, and kick it. That’s what the song is about just having a good time but telling the story from the perspective of me being a Chicago guy and him being a Detroit guy.

TRHH: What do you love about the Chicago Hip-Hop scene and what do you think can be improved?

Scofield: I love that it’s a lot of people out there that are involved in it. It’s always something new and burgeoning coming up in the scene. If you think about the Chicago Hip-Hop scene you’ve got the up north underground Hip-Hop scene which is pretty much the dominant effect on the north side. Then you have the drill scene or more of the street scene. In that whole sea of talent there are some guys and girls that are really good at what they do. From that standpoint it’s always pushing you for two things; number one, it’s always an opportunity to you have your voice heard, and number two, there are people challenging you every step of the way to improve your craft and to remain relevant and stay consistent — there is a lot of competition. The thing that I think needs to improve is just the integrity of the music. Right now we’re trapped in a scenario where we’re riding a wave that wasn’t generated by Chicago people. You got a lot of people that are riding the wave of a group of artists that are from a different place in the country.

Chicago doesn’t really have a go-to identity right now and the only go-to identity that we’ve ever gotten any press for was the negative one, which is the drill movement. It’s glorifying a lot of violence and feeding into the media machine of Chicago being such a violent place and it’s not really like that. I’ve lived in Chicago my whole life and I come from a time where it was way more violent than it is now and way more dangerous to be out in the world than it is today. Every step you take you see that the media is glorifying violence and you have artists that are jumping into that and further glorifying it. If there are any improvement or changes needed we need to have an identity as an overall community and we need to stress that. Whether that’s a certain style of music or a certain sound of music, it’s something that we just don’t have. You got to Detroit they have a sound, you go to New York they have a sound, you go to Atlanta they have a sound, you go to L.A. they have a sound. You go to Chicago and it’s like a melting pot of all these different sounds. I don’t think we’ve mastered any of them and that’s the reason why we don’t really flourish.

TRHH: Isn’t that indicative of how diverse Chicago is though?

Scofield: I wouldn’t say that. If you think about it, if you go to Atlanta, Georgia most of the people that you meet there are transplants from another place. You have a lot of people from the east coast; New York, D.C., Virginia, Maryland, they all come to Atlanta for job purposes straight out of college. You go out to Los Angeles and most of the people that live there are not from Los Angeles. They came there for some other reason and then they dive into whatever that sound is that’s there already. There’s melting pots all over the country. Yes, we are in the middle divide in terms of geographically where we are, but we still don’t have a sound. It’s almost the same as if you move somewhere else you have to acclimate to that vibe and that culture. It’s not the other way around.

It doesn’t usually work like that where you bring a certain something to the table. You usually have to acclimate to what’s going on around you and your surroundings. The same thing holds true with music. If Chicago had a defined sound people would come here and would have to at least incorporate that into their own style in order for that to work. It wouldn’t be the other way around. It wouldn’t be like “I wanna be from down south this year, and next year I wanna be a New York rapper, and the next year I wanna be a laid back west coast rapper.” This is the core sound of music here. You can add to it to further flesh it out, but it wouldn’t be a scenario where you’re all over the place and don’t have a defined sound.

TRHH: Who is The Legend of Scofield made for?

Scofield: First and foremost people that respect good Hip-Hop. If you like whoever you would consider to be the core Hip-Hop people, the Nas’, the Biggie’s, the Jay-Z’s, or whatever the case, then you’ll like this album. Anybody in the age of 30-to-45 you’ll like this album. And then in general anybody that just respects emcees. If you like good hard beats and good rhymes you’re going to like this album. I think there is something in there for everybody. It’s not just a trendy album. It’s a deep album if you really listen to it and some of the things I’m talking about. Even if it’s tongue in cheek it’s a message in every single song. Bar for bar I think anybody who likes emcees will like it. You can’t not like it if you like good rhymes, it’s right there in the pocket for you.

Purchase: Scofield – The Legend of Scofield

Sherron Shabazz is a freelance writer with an intense passion for Hip-Hop culture. Sherron is your quintessential Hip-Hop snob, seeking to advance the future of the culture while fondly remembering its past.
View all posts by Sherron Shabazz →
This entry was posted in interview and tagged Chicago, City Lights, Collective Reach Music Group, Deepsicks, Illinois, interview, No Problemz, Scofield, The Legend of Scofield. Bookmark the permalink.