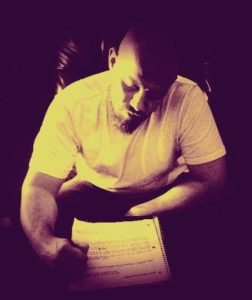 Matlock is a veteran on the Chicago Hip-Hop scene. For over a decade now Mat has produced quality material and curated Hip-Hop events that both elevate and preserve the culture. Matlock’s most recent work is a project that pays homage to the past, present, and future.

Matlock spoke to The Real Hip-Hop about the ever changing Chicago Hip-Hop scene, his upcoming documentary, and his new album, Matlockland.

Matlock: It’s a collection of things I’ve been busy on for maybe like the past eight years. There’s a bunch of new material on it, too. Like all my stuff I think it’s a well-rounded project. Matlockland is just like a window into my life. You’re looking into my world.

Matlock: Oh man, Red’s been one of my favorite artists since Headbanger by EPMD. I remember being in Sam Goody to get “Whut? Thee Album” on tape and every release after that. Nas and Red are my top two. I had Dare Iz a Darkside, I had the Can’t Wait vinyl — it was just the jam — the video too. It’s one of my personal favorite rap songs that’s why we did the cover.

TRHH: The album has some covers of lots of classic material. Why did you decide to add your twist to some of rap’s most notable songs?

Matlock: Like I said, Nas and Red are my favorites so in addition to Can’t Wait I did “If I Screwed Your Girl” which is of course over If I Ruled the World. Those are my dudes so I’m paying homage to them in mixtape fashion. Matlockland is more of a mixtape.

TRHH: The Kris Kross thing was incredible. What inspired that?

Matlock: [Laughs] We were having fun with that. We actually booked a show called “Dump Trump” so it was an anti-Trump theme to it. We were trying to promote the show and Mic was like, “Man, we should jack something.” So we turned “Jump, Jump” into “Dump Trump.” We literally did that song just for the show but it kind of had its brief moment being shared around online.

TRHH: You’ve been around for a while, what’s your opinion of the current Chicago Hip-Hop scene?

Matlock: It seems to get progressively worse, man. Maybe we just look for things to complain about. We even complained back in the day. In the late 90s we were complaining, but we had no idea where it was going. Currently it’s really suffering. There is no unity at all. It gets less and less each year. There’s too many subcultures it seems. We don’t have a main theme or a main sound. The pure grassroots Hip-Hop people that did shows back in the day got phased out by pay to play. National touring acts, everybody will come out to support them but nobody wants to support the dude really doing it from their hometown. I think it’s a shame. It does have its glimpses of greatness still. It’s always going to be great.

TRHH: I’ve heard different opinions about why we don’t support each other. What’s your opinion on why there is no support?

Matlock: It’s a lot of things, man. It might just be the mentality here. It’s kind of a gangster city in its essence and in its history and everyone is out for dolo. Nobody wants to share the spotlight. When I do shows I try to get people from every crew. I don’t really discriminate. Even people I’ve had beef with I’ve booked at shows because I think they’re dope and people love them. We need more things like that.

TRHH: What inspired the song ‘Meditate‘?

Matlock: Ah man, I was actually fishing for beats and somebody linked me to this dude Obvious Bane. I had never heard of him. Dude ended up shooting me a bunch of beats. We talked a little bit and I hopped on it. As soon as I heard that beat it was crazy. It sounded like a DJ Premier beat in his heyday. I simplified my flow on that a lot. It sounds almost like Pac or 50. It was ill for me. It was a little something different but I think it came out great. I’m looking to work more with them dudes as soon as possible.

TRHH: Tell me about Gold in the Gutter.

Matlock: That’s my current project I’m working on. I’m having fun with it – it’s beautiful. It’s like the culmination of everything that I’ve done musically. We have old footage that no one has seen before, live footage, and interviews. It’s going to have a story behind it, too. We don’t want it to be just a history lesson. I want it to be Netflix worthy.

TRHH: When can we expect to see that?

Matlock: We’re filming right now. I don’t know. This is my first time doing a movie like this. It’s a huge project so I definitely can’t give myself a deadline. I’d like to have it out in at least a year if not sooner. It’s a lot of work.

Matlock: It’s an open road, man. Anything is possible. Gold in the Gutter is going to be out as soon as I can. That’s what I’m working on now. We also might do a best of with that with a bunch of new tracks. I’m always working on music, who knows what I’m going to do next.

Sherron Shabazz is a freelance writer with an intense passion for Hip-Hop culture. Sherron is your quintessential Hip-Hop snob, seeking to advance the future of the culture while fondly remembering its past.
View all posts by Sherron Shabazz →
This entry was posted in interview and tagged Can’t Wait, Chicago, Gold in the Gutter, Illinois, interview, Matlock, Matlockland, Meditate. Bookmark the permalink.