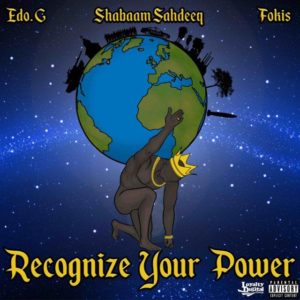 Edo.G, Shabaam Sahdeeq, and Fokis are Hip-Hop veterans. Together they have nearly 60 years of experience in the business of rap. These three men know the importance of utilizing their abilities to reach their goals, and they want to spread that message to fans of Hip-Hop.

The two emcees and producer have linked up for a new EP on Loyalty Digital Corp. titled, “Recognize Your Power.” The 9-track EP is produced entirely by Fokis and features appearances by Craig G, Torae, DJ Eclipse, Liteskin, Oh No, Planet Asia, and Ras Kass.

The Real Hip-Hop spoke to Fokis and Shabaam Sahdeeq about working with Edo.G, why it’s important to play to win, and their new EP, Recognize Your Power.

TRHH: How did you guys get together to decide to do this project?

Shabaam Sahdeeq: We all been working on a few joints together but in different locations and on different albums. Fokis wanted to make it happen. Me and Edo had been talking about doing a song or two here and there and the same thing with me and Fokis, so we decided to do it all in one lump on this EP. It came together pretty fast and dope. I did a lot of my vocals before I went on tour in Europe. By the time I came back they was done and ready to go. Now we’re going about shooting videos and releasing some things.

TRHH: What’s the meaning behind the title of the album, Recognize Your Power?

Fokis: Shabaam actually came up with it. My cousin did the poetry on the project and Shabaam was just listening to it and came up with that. It’s consistent with everything concerning why we even put this project together. The theme is about recognizing your powers with the ability that you have right now.

Shabaam Sahdeeq: Yeah, the ability that you have within. Whether it comes from getting up and going to work out or even voting. The power is within you.

Fokis: And what you choose to do with it. We chose to create a project. We’re all in three different places so we chose to utilize technology and that’s the beautiful thing about where we are right now musically. We have the ability to do that. I don’t ever have to see these guys and we can create a project and that’s dope.

Shabaam Sahdeeq: And then when we do meet up we can shoot some videos. We get it done. Everybody is in a different state and everybody has different things going on, but where there is a will there’s a way.

Fokis: And my name is Will so it all works [laughs].

TRHH: Talk a little about the single Play to Win.

Shabaam Sahdeeq: Play to Win is just about champion bars. Play the game to try to win every time you release a joint.

Fokis: We’re trying to maximize. We got the heavyweights on there lyrically. We thought it was the perfect single to release first because it just represents everything – bars, hard beats, scratches – boom, that was it.

Shabaam Sahdeeq: Edo is on tour right now. As far as putting the music down it happened 1, 2, 3. Right now he’s on tour so he’s missing out on the promotional aspect of what’s going on. I’m sure as soon as he gets back in town he’s going to jump right in.

Fokis: He definitely works fast. He knocks out vocals, shoots them right to you, and boom.

Shabaam Sahdeeq: Yeah, they shot like four videos in one day, right?

Fokis: Yeah, we drove out to Boston to shoot videos and Shabaam came into New York for a couple days and we knocked out some more videos.

Shabaam Sahdeeq: That’s how you do it. That’s the power right there.

TRHH: That’s a lot of work, man. Speaking of work, Shabaam, you also recently released a joint project with Marvelous Mag. Talk a little about the God’s Coins EP.

Shabaam Sahdeeq: We had that project done since like wintertime. We was just sitting on it and toying with how we were gonna release it, and what joints to release. We actually got more joints than what’s on that EP. It’s about continuously working and finding new, different things to drop at different times that segue each other. This is like a segue into Recognize Your Power. It’s a free project for everybody to get. Recognize Your Power is the main event with the vinyl, cassettes, and everything.

Shabaam Sahdeeq: Yeah, God’s Coins is the appetizer, this is the main meal. Word up. Some of those are industry beats. We took one from J Dilla, we took one from White Lotus. Those joints obviously we can’t put out to sell commercially. Recognize Your Power is obviously the main course.

TRHH: Fokis, talk a little about your recent weight loss.

Fokis: It’s simple, I was 303 pounds. I was recording and mixing the Barrel Brothers album with Skyzoo and Torae. While I was doing that album a friend of mine introduced me to CrossFit. At that point I wasn’t even rapping like that anymore of even producing. I was just engineering.

Shabaam Sahdeeq: He was trying to look like a G.I. Joe [laughs].

Fokis: [Laughs] I saw the success of the Barrel Brothers project. I recorded and mixed that in my home. Just seeing the success of it inspired me how you could create something right in your crib and it could shoot out to the world and you can get bread off of it. At the same time a friend of mine introduced me to CrossFit. It’s very challenging, but I love overcoming challenges. I basically got hooked on the CrossFit and as I started to drop weight I got more and more motivated musically. I hit a point where I’m down to 217 and I feel fantastic creatively. It made everything around me so much better – life itself. I love my job. I get up, I go to the gym, and then I go and create music. Back to the Recognize Your Power, it’s what we make of it so I’m going hard. Shabaam goes super hard with this music thing. Fitness and music go hand in hand.

TRHH: Who is the Recognize Your Power album made for?

Shabaam Sahdeeq: This album is made for all the people who think they can’t do it, but they can. That’s why we called it Recognize Your Power. The people that’s out there trying to make it every day recording joints, mastering, doing art work, engineering, working out, painting, everybody is trying to tap into that inner power and make something happen this is what you put on. This is the soundtrack. You pop it in your ear when you’re painting, driving, making moves, this that joint right here. I think all the songs are pretty much motivational joints.

Fokis: Absolutely. Definitely some good hard bars, some good hard beats, and some melodic flavor in there. If you’re a fan of some rap music – Hip-Hop – you’re gonna love this project. It’s two amazing legends on there.

Sherron Shabazz is a freelance writer with an intense passion for Hip-Hop culture. Sherron is your quintessential Hip-Hop snob, seeking to advance the future of the culture while fondly remembering its past.
View all posts by Sherron Shabazz →
This entry was posted in interview and tagged Boston, Edo.G, Fokis, God’s Coins, interview, Loyalty Digital Corp., New York, Play to Win, Recognize Your Power, Shabaam Sahdeeq. Bookmark the permalink.