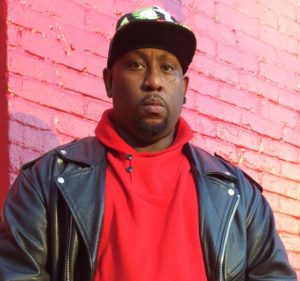 Shabaam Sahdeeq is in a way the guardian of the underground. The Brooklyn, New York native first appeared on Rawkus’ Soundboming in 1997 alongside the likes of Mos Def, Talib Kweli, R.A. the Rugged Man, and Company Flow. That all-star class of lyricists continue to expand their sound while staying true to their underground roots – Sahdeeq is at the forefront.

Shabaam Sahdeeq spoke to The Real Hip-Hop about the lessons he’s learned in the business of rap, his upcoming tour of Europe, and his new album, Timeless: of the Collection.

TRHH: Why’d you call the new album ‘Timeless: of the Collection’?

Shabaam Sahdeeq: I felt like a lot of the pieces were timeless and it’s of a collection, which is a four or five part series of albums that’s going to start with a certain title and then be “of the collection.” For instance the next one would be “Limitless: of the Collection.”

TRHH: The song ‘It’s a Must’ features some heavy spitters. How did that song come together?

Shabaam Sahdeeq: Planet Asia came down twice for A3C. I live in Atlanta now so when he came he stayed at my spot. We worked on like 3 or 4 joints. I used one of the joints for this album. Milano – we work with the same producers. Ready Cee was down here so that’s when we put that song together.

TRHH: The song ‘Freedom’ stands out to me due to its message. What inspired that song and how long ago did you write it?

Shabaam Sahdeeq: I wrote it about two years ago. The original beat was done by Evil Dee from Da Beatminerz. I decided to revamp it because not that many people heard it. Rkitech did the remix. It’s definitely what was on my mind. With the climate of what was going on with the police and Trump getting in office I decided to put that song together.

TRHH: Do you have a favorite song on Timeless: of the Collection?

Shabaam Sahdeeq: One of my personal favorites would be Freedom. Second would be “Get Up & Get It.” Third would be “Love You.”

Shabaam Sahdeeq: “Get Up & Get It” is like my gym anthem. It’s my personal anthem for getting up in the morning, getting busy, and going to work. “Freedom” for the same reasons I just told you. I always like to have a message song on my album. At least two or three different messages of something positive to play for the kids. “Love You” is just unorthodox. I love Sade. I remember back in the day a lot of albums used to have the love joint on it. They don’t have it anymore so I decided to do one and it came out good.

TRHH: You’re going to be touring Europe soon. Where will you be performing and what do you have in-store for fans across the pond?

Shabaam Sahdeeq: I’m supposed to be doing nineteen cities. Germany, France, Spain, England. I was just there in November. It’s part of the same tour, actually. All of the cities that I couldn’t get to touch because of time issues I’m doing them this time. I’m definitely bringing some new energy, new songs, a whole new set, and a lot of people’s are going to be on tour at the same time. Ras Kass and Jamo Gang are going to be on tour at the same time so we’re going to link some of these shows together and make it look like it’s supposed to look – a family affair. Ras Kass, El Gant, and J57. Me and J57 got a whole album coming out after this one called “Precious Stones.” That’s like my affiliates.

TRHH: Tell me about Precious Stones.

Shabaam Sahdeeq: Precious Stones is completely produced by J57. I want to keep some of the guests a surprise. I can tell you that Planet Asia is definitely on there. That’s one of the songs we did when he was here for A3C.

TRHH: It’s been over twenty years since the masses first heard you on Soundbombing. What would you say is the greatest lesson you’ve learned in the music industry?

Shabaam Sahdeeq: To go over your paperwork. Register all your songs. Make sure you do your copyrights. Tie all the loose ends up. At the time when I did Soundbombing I just wanted to record music. I didn’t know anything about business. I was just a young kid trying to make music. Now, especially when you’re independent, if you tie up all those loose ends, even if you don’t go platinum or make it super big you’ll be able to make enough money to support your family and tour the world. The lesson I learned is to just be on top of your business completely! It’s a lot of people that don’t know about publishing, copyrights, clearing samples, and all kinds of stuff.

TRHH: Isn’t it expensive for a young artist starting out to copyright each song and clear samples?

Shabaam Sahdeeq: Clearing samples, maybe. But if you’re under the radar 9 times out of 10 you just don’t clear the samples unless it makes it big. It’s kind of like a catch-22. I remember when Pharoahe Monch’s “Simon Says” took off the sample wasn’t taken care of. Once it blew up they took care of it afterwards, which kind of took away from some of the money, but once a song takes off you already won. You’re on to the next level so it doesn’t really matter. Copyrights are not that expensive. It’s something you gotta do because somebody can just take your song and run with it.

TRHH: When can we expect to hear the next installment of the Collection?

Shabaam Sahdeeq: I’m not sure, actually. I’m working on so many projects. I think after Precious Stones I want to drop Keepers of the Lost Art 2 and then come back to the Collection. You play with names and ideas and you might want to revisit something – that’s what I do.

Sherron Shabazz is a freelance writer with an intense passion for Hip-Hop culture. Sherron is your quintessential Hip-Hop snob, seeking to advance the future of the culture while fondly remembering its past.
View all posts by Sherron Shabazz →
This entry was posted in interview and tagged Brooklyn, Freedom, Freedom Remix, GMR, Grown Man Rap, interview, It’s A Must, New York, of the Collection, Polyrhythm Addicts, Shabaam Sahdeeq, Timeless, Timeless: of the Collection. Bookmark the permalink.