Deca: The Way Through 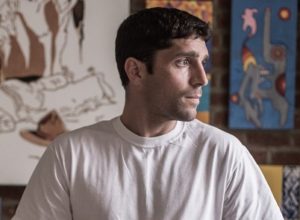 Emcee, producer, and visual artist Deca has over a decade in Hip-Hop. His music and art often merge to reflect the times. Given the current instability of the world Deca went into the lab to create an album to give its listeners hope about the future called “The Way Through.”

Deca spoke to The Real Hip-Hop about his album, The Way Through, the similarities between Hip-Hop and visual art, and why he’s optimistic about the world’s future.

TRHH: Why’d you title the album ‘The Way Through’?

Deca: Sometimes you get to a point in life where you can’t see the way forward, whatever it may be, stumbling blocks or things that happen. I guess it’s sort of about finally being able to see a way forward if that makes any sense.

TRHH: Is this in any scenario or a depression scenario?

Deca: A depression scenario. Sometimes you can be at a point where it seems like all the ways are block and you can’t see how to get past a certain thing. Doors sometimes open where there weren’t doors before. It’s just sort of about struggling through your own darkness and trying to forge ahead and find a way in life in general.

TRHH: On the song ‘Mammon’s Mantra’ you say, “I’m an optimist, locked in the grips of an unseen hand with an axe to grind.” What did you mean in that line?

Deca: I guess I meant in spite of all the things that I’m bringing up, the powers that be, and the control systems in place, I’m optimistic. I have faith in humanity in general. In spite of all the chaos and the stuff that we’re going through at this time, somehow it’s going to work out. I have hope in the future and hope in humanity. The unseen hand is just the real string pullers in our society.

TRHH: Who are these string pullers and why do you have hope?

Deca: The hope side is more spiritual. I have hope in the direction the universe wants to go – the evolution of things. I have hope in people that they can open their eyes and see. I feel like we’re being manipulated. Everywhere we look whether its advertisers, they’re always trying to manipulate our psychology and feed things to our fears and our shortcomings. I have hope that people will start to see through this more and more.

TRHH: Your lyrics are multi-layered. What’s your songwriting process like?

Deca: It’s a lot of just building little ideas here and there. There is no one way that I write songs. I can sit down and knock out a verse in a single sitting or knock out a song in a single sitting. Sometimes I’ll work on a song for weeks and keep coming back to verses, lines, and re-work things. There is no one way that I do it but there is a lot of jotting down little ideas until it turns into something bigger. I’ll have an idea for a song or a chorus and just build ideas around that. There is no method to it really.

TRHH: Is doing art more gratifying to you than making music?

Deca: I wouldn’t say it’s more gratifying. It’s a lot easier though because the music I take a lot more serious. For whatever reason it means more to me to make music and write lyrics than just drawing. When I draw or paint it’s more meditative. It’s easier for me to do and more fun. Making music is fun, too, but sometimes it can get a little too heady because I take it so serious what I put out there. Art isn’t the same way for me, it’s more like something to do for fun.

TRHH: Are there any parallels between visual arts and beat making?

Deca: Yeah, I think there’s parallels between all forms of art. There is a huge collage element to everything that I do. Everybody does – you pull ideas from different places, from different parts of your life, and from different experiences. It’s almost like a patch work kind of thing. Something that you draw might have been inspired by an experience you had as a little kid that came back to you. All these things are interconnected in a strange way. With art I definitely do that, with writing lyrics I definitely do that, and with beats it’s all collage with the style that I do, which is sample-based stuff.

TRHH: What does your production set-up consist of?

Deca: Right now I have the MPC 2000XL, a turntable, a computer and Pro Tools. That’s all I use.

TRHH: That’s traditional. Today mainstream Hip-Hop has moved away from that set up. What’s your take on the synth sound of today?

Deca: It just depends on the producer. You can pull sounds from anywhere and make dope beats. However you go about it I have no qualms with anybody using software, synths, or 808s. The only reason I make beats on the MPC 2000 is because I’ve been using it since I was 17 years old. It’s not for any nostalgic reason like beats have to be made a certain way. It doesn’t have anything to do with that, it’s what I learned on and what I know how to use. I ordered an OP-1. It’s like a tiny synth. I don’t know a lot about it, but I saw videos on YouTube and the sounds are crazy. That’ll be the newest toy added to the studio.

TRHH: What inspired the song ‘Skyward’?

Deca: I honestly don’t even have an answer. That was the first song that I finished for this album and it’s been years since I wrote it. It was probably 2013 or 2014. I can’t really remember where my head was at. I know it started with those first opening lines and the song built from there. I guess it’s a feeling of an individual against something much larger. Like a menacing monster of modernity or something like that [laughs].

TRHH: Who would you say ‘The Way Through’ album is made for?

Deca: To me it’s made for humanity – everybody. If I had it my way there is no one target audience. I’m trying to get everybody’s ears – whoever it appeals to and whoever likes it.

TRHH: What’s next up for Deca?

Deca: I started on the next album – I’m a good ways into that. Trying to book a lot more shows. I’m doing a tour of Europe and I’m just trying to keep the content coming. I dropped “The Ocean” in 2014 and it was almost four years until I put out The Way Through. I did an instrumental project in 2016, but I definitely don’t want as big of gaps in between albums. I’m working on a lot of new stuff.

Purchase: Deca – The Way Through

Sherron Shabazz is a freelance writer with an intense passion for Hip-Hop culture. Sherron is your quintessential Hip-Hop snob, seeking to advance the future of the culture while fondly remembering its past.
View all posts by Sherron Shabazz →
This entry was posted in interview and tagged Beulah Records, Deca, interview, Mammon’s Mantra, New York, The Way Through. Bookmark the permalink.