Posted on December 3, 2018 by Sherron Shabazz 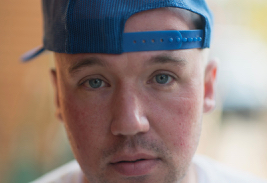 Skipp Whitman is back with a new album, a new sound, and a new outlook. After tackling serious subject matters with a more traditional sound on his previous work, Whitman has decided to reach a broader base with his new music. Whitman’s new album “Girls” is an upbeat and catchy piece of work that pays homage to the female species.

Skipp Whitman recently chatted with The Real Hip-Hop about the change in his sound, the hell that is L.A. traffic, and his new album, Girls.

Skipp Whitman: I called it “Girls” because after my last album, which was about more difficult life stuff, splitting up with my ex, more dark themes, and having a year and change to recover from that and walking around L.A. all months of the year, I just woke back up over the last year to females. Just noticing, admiring, and interacting with them was really the inspiration for the album.

TRHH: How were you when you were not interacting with females?

Skipp Whitman: I was telling somebody else, it was like a Rocky montage. I was losing weight, redefining my habits, getting my room situated, listening to drums, and learning more music. With anybody, being in a relationship you lose yourself a little bit in somebody else. It was a great time because it allowed me to 100% focus on regaining my center. Once I felt like myself again fully I started opening my eyes again.

TRHH: So now you’re meeting girls and dealing with girls; is that a positive or a negative?

Skipp Whitman: It’s positive because what I’ve always been an all-or-nothing person. Interacting with girls, women, and dating I was always very much like, if we’re dating I’m wifed up, home on weekends, and going to Bed, Bath & Beyond picking out candles for the house. It was just an all-out type of thing. Once I got this freedom again I realized that there can be friendships and there can be girls that I admire from afar that inspire me to write music, and it doesn’t necessarily mean it has to be something. There were just all these different levels and that translates to life as well. It doesn’t always have to be so intense like an all-or-nothing thing, so it’s been great.

TRHH: The album cover to Girls is really ill. Who is the lady in the photo?

Skipp Whitman: [Laughs] Her name is Melissa Vento. She’s incredible. She’s an artist, she sings and produces, she works for Tesla now, and she’s into engineering. She’s a very interesting, really unique girl. I first met her because she was in a video I did called “L.A.” and then she was in “L.A. Traffic” oddly enough. She’s one who it’s been really cool to work with creatively. I’ve even been asked by friends, “Yo, you hit it?” It’s never that. I can just admire that she’s beautiful, enjoy her creativity, and leave it at that. She definitely inspired a lot of the album. Also, on the Interlude track it’s just her and I talking. It’s an epiphany to me that I can have interactions with a girl that beautiful and leave it at that.

TRHH: You mentioned ‘L.A. Traffic’ and the video made me laugh because L.A. traffic is pure misery.

Skipp Whitman: [Laughs] Yes, it is.

TRHH: I was there for All-Star Weekend maybe 7 years ago and I was stuck in traffic for about two hours. I wanted to leave the car on the highway and just start walking. It was so bad.

Skipp Whitman: Yes! It’s one of the L.A. cliché’s that are unfortunately true.

Skipp Whitman: It’s funny I made that song, and this blows a lot of people’s minds in L.A., but I actually don’t even have a car. I live in this area called the Arts District in North Hollywood and it’s real dope because any jobs that I have or anything that I do creatively, or getting groceries or the gym, everything is within a 1 mile radius. I’m literally able to walk everywhere I need to on a daily basis, and besides that Uber is dope out here. For five bucks you can get very far. That’s the only way I could deal with it to be honest with you. Again, coming from the East Coast, the idea of having to get in my car, having to hit the highway, and parking to get anywhere is paralyzing to me. Maybe that’s why I’m able to look at it as a comedic thing because it’s not my reality out here.

TRHH: You’re lucky. ‘Bright Times’ is a song where the beat matches the title but the words aren’t really bright. How did you come up with the concept for the song and the video?

Skipp Whitman: Bingo, bingo [laughs]. When I started writing it, it was just to the chord progression. That’s how I write most of my stuff. I come up with a chord progression first, then I write to it, and then I build everything up. The sound of the percussion is just me banging on my desk. It’s all organic from my room. It started as dark, “I’m sick of watching this television,” “I’m sick of this,” and “I’m tired of that.”  Not until I got to the end of the verses and choruses did I think it might be a cool flip of irony. Bright times like thinking of bright times, aren’t these bright times, but they’re really not. I always like to give things a twist. The way that it wound up musically, my homie Jeremy Jones played viola on it, so that’s all his strings. The way that the rhythm and the melody came up it wound up sounding almost country. I actually found an RV on Airbnb and that was the location of where we shot it. The actual plot we thought up the day we got there. We showed up and we had the camera, the lights, we had the girl and then we were like, “So, what are we doing?” We came up with the concept right there. It was intense.

TRHH: The song ‘No Dedications’ stands out to me on Girls. What inspired that song?

Skipp Whitman: That was just a stream of consciousness, really. I liked the idea of writing a song to somebody. As opposed to a love song to a girl I’m saying these lyrics like, “We’re connected, even though we haven’t met,” or “Slow down on the drugs.” I’m just thinking of different people when I’m writing about things. Again, it all starts with the chord progression, so once I have a chord progression that moves me or makes me feel a certain way the lyrics just come. My homie that plays guitar with me when I perform in L.A. came in and laid the really strummy kind of moody guitar. This girl River is the one at the very beginning who introduces the album and she sings on Bright Times, it’s just me and her having a conversation in the back. I love the texture of that. I love the Marvin Gaye records where you hear them in the studio. I love giving that atmosphere to a song. It just fills it out I think.

TRHH: The first time we spoke you said that you aspire to be a jazz musician, but listening to the new album it has a big sound like most pop music. Is that a fair assessment?

Skipp Whitman: Yes! Yeah, that’s interesting. Yeah, that’s super-fair, man. I think making these videos has really crafted how I write songs. And good or bad, I can’t help if I’m about to put X amount of dollars in a video and all of this planning, it’s gotta be a song that’s worth it. Again, I think it just has to do with my frustrations with all this time, money, years, and effort and people paying little to no attention. I obviously want to maintain my creative integrity. No Dedications has a jazzy progression and feel to it, but at the same time as an artist that wants to be living full-time off of his art, I want to make things that are digestible to people. I’m not making the trap sound or what you’d call pop Hip-Hop – I want to create my own thing. The hooks and everything is also me trying to appeal to as many people as possible while maintaining what I actually like to do.

TRHH: Who is the Girls album made for?

Sherron Shabazz is a freelance writer with an intense passion for Hip-Hop culture. Sherron is your quintessential Hip-Hop snob, seeking to advance the future of the culture while fondly remembering its past.
View all posts by Sherron Shabazz →
This entry was posted in interview and tagged Bright Times, Brookline, California, Girls, interview, L.A. Traffic, La Traffic, Los Angeles, Massachusetts, No Dedications, Skipp Whitman, Whitman Industries. Bookmark the permalink.