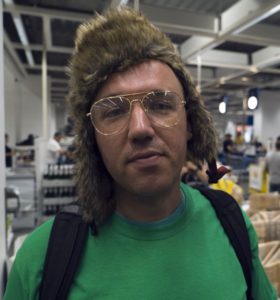 Skipp Whitman is an emcee from the Boston area who now resides in the City of Angels. His music can’t be put into box, but it’s unquestionably real Hip-Hop. In early 2017 Skipp released a 10-track EP called “Piece.” The project is produced entirely by Skipp and features guest appearances by J.W.J and Statik Selektah.

Skipp Whitman is preparing to kick off 2018 with a collection of music that’s not new, but new to me and you. “Unfinished Songs Vol. 1.” is an album of freestyles and unfinished songs by Skipp Whitman. The first single from Unfinished Songs is a song called “Comfortable” with accompanying visuals that finds Whitman rhyming in of all things, an IKEA.

The Real Hip-Hop spoke to Skipp Whitman about his musical background, putting pieces of himself into his music, and his upcoming album, Unfinished Songs Vol. 1.

TRHH: Why did you call the last project ‘Piece’?

Skipp Whitman: I called it “Piece” because each individual song was a piece of my life. One song was about my split with my ex, one song was about work, and the album cover art is my face broken up with all these pieces kind of coming out of my head.

TRHH: What inspired the song ‘Indie’?

Skipp Whitman: My career up ‘til this point [laughs]. Just kind of the idea that sometimes people want to say, “Oh I’m an indie artist,” but the point of my song is basically saying that maybe that’s not the best approach. That was kind of my flip on it. I’ve heard a lot of people say, “I’m making a living off of music,” but my point is if you’re living at home and if you’re barely living are you really making a living?

TRHH: What’s the toughest part about being an independent artist?

Skipp Whitman: Just the balance. The balance of survival and making a living and leading a somewhat normal life, while finding the time to create new music, meet new people and think of new ideas.

TRHH: What’s the best part about it?

Skipp Whitman: The freedom [laughs]. The ability to not have the pressure to have to come up to a certain standard or really be defined by anything. The ability to experiment. There’s something about while you’re still under the radar that there is a freedom in not as many people watching you because you haven’t clearly defined who you are yet so you have the ability to play around with different concepts.

TRHH: You produce most of your music, what does your workstation consist of?

Skipp Whitman: An iMac, an M-Audio midi keyboard, a mic, and I just got one of those Avalon preamps and that’s it. I work on Logic. I produce and play everything on Logic and when it comes to tracking vocals, Pro Tools. It’s crazy how compact things have gotten nowadays.

TRHH: So you do everything at home?

TRHH: What’s your musical background? Can you play keys?

Skipp Whitman: I can play. Everything that you hear on Piece or any of my most recent stuff I composed and played all of it. My background is I basically was raised in a recording studio back where I’m from in Boston. My father and my uncle owned it so I was an intern at like 9. I was just always around it and when they would go on tour with different bands I would be with them. I wouldn’t say a musical background in terms of being classically trained but I was just always around music.

TRHH: How did you get into Hip-Hop?

Skipp Whitman: Tribe Called Quest – Scenario. It was the first thing that got me excited. It wasn’t even necessarily that it was Hip-Hop per se, but that song and obviously all the related songs from there gave me an excitement that nothing I had heard up until that point gave me. Several years later, as with I think with a lot of people, I just started copying down these lyrics and gradually tried writing my own. That’s it. You discover one thing from another act, and somebody that collaborated with somebody else. In high school I did a rap in a talent show and the response from that is what started me to think that maybe I should try it.

TRHH: How did the song and video for ‘Comfortable’ come together?

Skipp Whitman: [Laughs] Shopping at IKEA, man, looking for furniture. I was with my brother who is super creative. He used to work on the Criss Angel show, he’s done all these crazy magician things, and he’s a really creative guy. I was looking for a bed and thought of the idea. We saw all these different rooms set up and he was like, “These look like movie sets. We should shoot a video in IKEA.” I hadn’t even had the song yet. I thought of comfortable furniture and all that and then I thought what does “comfortable” mean to me. So again, all the trappings of luxury and life and the twist being these are all the things I imagine myself having, but look at this, I’m just in this cheap furniture store. We wanted to give it a twist on the video so it would kind of surprise them at the end. It was actually pretty easy to shoot. They didn’t really pay attention to us, so it was dope.

TRHH: I hear a lot of different influences in your music from East Coast Hip-Hop to Reggae, how would you describe the Skipp Whitman sound?

Skipp Whitman: About two albums ago I started composing my own stuff. The more I compose my own stuff the more I aspire to be really a jazz musician, believe it or not. Those are the chords that I go for. The biggest musical influence on me aside from Hip-Hop would be Bossa Nova, Brazilian jazz. Going back to Tribe Called Quest it’s the same thing – the jazz influence on Hip-Hop. I would say the Skipp Whitman sound is like a jazzy sort of chord progression based music, if that makes sense.

TRHH: What can we expect to hear from Skipp Whitman in the near future?

Skipp Whitman: Aw man, the next project that’s coming out is called “Unfinished Songs: Volume 1” and it will have ‘Comfortable’ and all these different songs that I didn’t feel were album worthy. They were either freestyles or half the songs or whatever. And then I have a bigger project coming out after that. Ultimately what you could expect to hear is music that’s going to be reflective of my life at any given time. Whatever I’m going through is always what I write about. So you’ll continue to hear the stories and the experiences with hopefully and even further developed music base.

Sherron Shabazz is a freelance writer with an intense passion for Hip-Hop culture. Sherron is your quintessential Hip-Hop snob, seeking to advance the future of the culture while fondly remembering its past.
View all posts by Sherron Shabazz →
This entry was posted in interview and tagged Brookline, California, Comfortable, Indie, interview, Los Angeles, Massachusetts, Piece, Skipp Whitman, UFSV#1, Unfinished Songs Vol. 1. Bookmark the permalink.