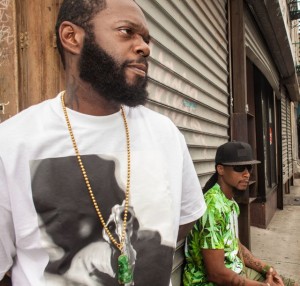 Duck Down Records recording artists Tek and Steele, also known as Smif-N-Wessun, have two decades of experience in the game of rap. The duo came onto the scene as guest stars on ‘Black Smif-N-Wessun’ from Black Moon’s 1993 classic, Enta Da Stage. What followed was five albums in a sixteen year span, including the group’s critically acclaimed 1995 debut, Dah Shinin’.

Smif-N-Wessun ended 2013 with the release of a 6-track EP titled Born and Raised. Born and Raised is a Reggae inspired album filled with uplifting lyrics from Tek and Steele. The EP is produced entirely be production duo Beatnik & K-Salaam and features appearances by Junior Reed, Jr. Kelly, and Jahdan Blackkamoore.

Smif-N-Wessun spoke to The Real Hip-Hop about working with Beatnik & K-Salaam, the possibilities of a new Boot Camp Clik album, and their new EP, Born and Raised.

TRHH: What inspired you to make a Reggae influenced project this go round?

Steele: It’s something that we did sporadically when we worked on our first album in ’95, Dah Shinin’ we did a record called ‘Sound Bwoy Bureill’. Fast forward to this time, it wasn’t nothing that we was planning or premeditating, it was a natural evolve-ment. It was another part of what we already did naturally, we just tried to find the right spot for us to expound on it. It was good that we met up with K-Salaam and Beatnik. Dru Ha actually bumped into K-Salaam in the streets of New York and he was like, “Yo, I wanna do this project.” We always had it in our minds; we just don’t know what the right time would be, how we would make it happen, and what we would rap about. It’s like 360 degrees back home and it’s perfect timing.

TRHH: Why’d you title it Born and Raised?

Steele: We had a couple of other titles. We just tried to come up with something that would encompass what we were doing. You always do that as an artist. You try to do something artistically to grab the people’s attention. We had some other titles, the titles was wack. That title came after we recorded like half of the project. We realized instead of looking for a title we just need to call it what it was. We had a song and we just went with “Born and Raised” and it was perfect.

TRHH: Whether it’s Pete Rock, Beatminerz, or Beatnik & K-Salaam your projects tend not have too many different producers on them. Is that strategic or does it just turn out that way?

Tek: That’s the way we plan it when we go into a project. You can always get the hottest producer of the moment or this guy who does things this type of way, but it takes time and a lot more things just to get one producer or one engineer to make a bond and make beautiful, timeless music. Not to compare us to other people, which I don’t like doing, but they said Just Blaze wasn’t featured on the Watch the Throne album because Just Blaze and Jay-Z couldn’t find that vibe. They couldn’t catch that vibe at that moment to make the music that they like to make. Not that he couldn’t make another ‘PSA’ but they didn’t have the time to make that type of music. It’s like a relationship.

When you devote your time and energy to one person, you know that person, you feel that person. That person’s energy becomes your energy, and your energy becomes that person’s energy. When it’s an emcee and a producer that’s working together you’re going to feel it. Like I said, it’s like a marriage, you don’t want to spread yourself too thin out here in the streets and you don’t want to spread yourself too thin in the industry over these beats when you’re making a project that’s going to stamp your name on it. It’s certain projects that you can go and get more than one producer to show your versatility. At certain times you have to give the people out there what they ask for. Smif-N-Wessun are the peoples champions. They asked for this and this is what Smif-N-Wessun delivered. They didn’t want a bunch of guest features or what we gave them in the past. They wanted this right here in this day and time so that’s what it was.

Tek: For me personally, I like all good music. I hate when music awards, journalists, and DJ’s try to separate music. Music is music. Good music is good music. I don’t give a fuck if it’s on a keyboard or one chord on a bass guitar. If the artist can come and make some great music or good music, then why knock it or try to separate it? We got features with another group that’s our family that they may consider country music, which is the Da Grassroots. We have shows coming up with them and we make good music together. We make great positive music together. We have other music where it’s like Wyclef Jean or the Afros where people may consider that down south music, but it was still good music. It was still Smif-N-Wessun and this artist, nah bro, Smif-N-Wessun and this artist came together to make it. Smif-N-Wessun and whoever came together to make music. That’s what’s being made. It’s not one genre of music that’s being made. I don’t like the separation of music. The only other separation that you have in any other genre of anything is by weight class. In boxing it’s still all boxing but you have a featherweight, a middleweight, and a lightweight, but you still have the greatest pound for pound fighters in that genre of boxing, which they say is Floyd Mayweather right now. Even in music, it’s all great music. It doesn’t matter who is making what or who is on top right now. The music is the music which leads to the other things that all go back to the music.

TRHH: The EP has a lot of positive themes and messages. Was that calculated or is it just where the music took you?

Tek: It definitely wasn’t calculated. Since the beginning of Smif-N-Wessun’s career we’ve always been doing the patois. We’ve always been doing the blend of Hip-Hop and Reggae. It’s always been brought up that we should do a cover of this type of song or this type of joint or whatever, but now in today’s time it was time for this album to be made. If you fail to plan then you plan to fail. If you don’t look ahead and think of the moves that you can make as an artist or a person, then you’re not looking ahead to better yourself as a person or anything, you feel me? When you hear talks about certain albums but it ain’t that time, but when that time comes you plan for that situation. As an artist you’re not planning for those same vocals or words to come out at that time. It could be 2-3- or six years for that plan to come to fruition. As an artist you’re constantly writing. So when I’m writing, “I let the music talk to me and I reply to the mic and tell the engineer to record/And he applies it to the board.” Smif-N-Wessun works on vibes and we relay that back to the people. I think the positivity comes from karma. It’s to balance all the negativity that we did and put out there. It was time for some of the positivity to come out from Smif-N-Wessun and let it be known that we can do it this way, also.

TRHH: Going back, whose idea was it to do the ‘Wreckonize’ remix and were you apprehensive about rhyming over that sample?

Tek: That was Steele joint. He produced that.

Steele: We actually did a joint with Doo Wop for this mix CD and it was a freestyle. We were like, “You, that shit is dope. Let’s do a whole joint.” We did ‘Marry Juana’. “That’s why I had to marry Juana,” big up to the homie Doo Wop. We just did it like that. We weren’t trying to do nothing crazy. We were trying to pay homage to the music that brought us up

TRHH: That’s one of my favorite songs of all-time.

TRHH: I interviewed Sean Price a couple years ago and he said, “Buckshot and Steele taught me how to rock shows.” He didn’t go in depth about it but since I‘m talking to you now I have to ask, what exactly did you teach Sean about putting on a dope live performance?

Steele: I learned a lot from Buckshot, man. I’ll tell you some fly shit, we challenge each other and we’ve been in so many different positions where we got to see each other perform that we learn shit from each other that enables us to be better artists and better entertainers. If you ever see a Tek perform or Rock, Ruck, Starang, Louieville, or Top Dog, when they get into their zone you get that energy and see something you can utilize. If you’re smart you hold on to something that you can use later. It’s like each one teach one. We’ve always been comrades in our growth. Also the ones before us who have done great concerts have shown us things. We really tested each other to make sure that we could be formidable and valuable in this culture.

TRHH: I saw y’all perform in ’98 when the second album dropped at a show in Chicago with N.O.R.E. and y’all tore it down.

TRHH: You think there will ever be another Boot Camp album?

Steele: I hope so. Smif-N-Wessun just put out the EP, Buckshot, and Sean Price just put out albums not too long ago. Rockness Monstah is about to release something new. Everybody is pretty much working. It would be a beautiful reunion to see that come to fruition. You just gotta stay tuned to see what’s going on.

TRHH: Why is Born and Raised an important release for Hip-Hop in 2014?

Steele: Born and Raised is important because we all came from somewhere and sometimes you forget where you came from. There is a saying that says, “If you don’t know where you came from you don’t know where you’re going.” What’s crazy for us is the place where we were born is the place that we were raised. We’ve been there the whole time. What’s it say for a person who has to represent decades of change and decades of dedication to your community, to yourself, your career or whatever you choose in life to remain there? We’ve seen people switch and have seen very few remain and still live to tell about it. For us to be born and raised in Bucktown, in Brooklyn, in music, salute the Zulu Nation, Kool Herc, Afrika Bambaataa, the pioneers that have added on to the Hip-Hop culture, we’ve been raised through that. We’re just giving our version of what we experienced through these travels and to add on to the culture and strengthen the bond for the ones who think, feel, and experience similar things.

Sherron Shabazz is a freelance writer with an intense passion for Hip-Hop culture. Sherron is your quintessential Hip-Hop snob, seeking to advance the future of the culture while fondly remembering its past.
View all posts by Sherron Shabazz →
This entry was posted in interview and tagged Beatnik & K-Salaam, Born and Raised, Cocoa Brovaz, Duck Down Records, interview, Reggae, Smif-N-Wessun, Steele, Tek. Bookmark the permalink.