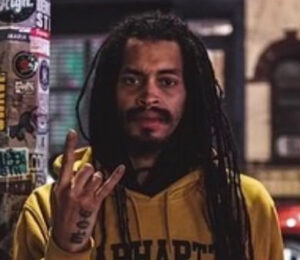 Bronx emcee Stack Skrilla is gearing up for the release of a full-length album with producer Unkyuno called “Oh You Ain’t Know!” Prior to the release of the project, Stack dropped an EP with Canadian producer 2FOR15 titled “5 for 20.”

5 for 20 is produced entirely by 2FOR15 and comes courtesy of Skrilla Vision Records. The 5-track EP contains eerie boom bap backdrops from 2FOR15 to accompany Stack’s punchline heavy slow flow.

Stack Skrilla spoke to The Real Hip-Hop about working with 2FOR15 on 5 for 20, why he prefers not to use choruses on his songs, and his upcoming album, Oh You Ain’t Know!

Stack Skrilla: 5 for 20 back in the day whether you were getting some smoke or some CD’s you got that extra one. It’s grind/hustle music. Real grittiness. Trying to get back to that old school feel. That ruggedness. Getting to it by any means.

TRHH: How did you link up with 2For15 and decide to do a project?

Stack Skrilla: 2For15 reached out to me on Instagram through the DM. He’s from Canada. He said he wanted to work with me and he heard a couple of my projects. He sent me some beats and the beats were good, so I said, “Let’s make something happen.” The rest is history.

TRHH: There are no hooks on this project at all. Why did you decide to just rhyme all the way through without any choruses?

Stack Skrilla: When I write everything is feeling. There is no specific structure. Whatever I give is how I feel. With those joints, I felt like if it don’t got a hook it don’t need a hook. That’s how I feel. I feel like I’m good with getting my point across without a hook or just short and sweet, quick and simple, you know? I’m not too big on hooks, period. If I feel like a song needs one, then it’ll get one. It’s not something that I’ll say “this one will have a hook.” I don’t think like that.

TRHH: Why aren’t you big on hooks?

Stack Skrilla: I don’t know. Everything is feeling with me. If a song ends up having a hook then obviously it has a hook. I don’t think it’s anything specific, again, I feel I’m good with getting my point across and most of the time that doesn’t require me having a hook.

TRHH: Your lyrics are very punchline driven, who inspired you to want to be an emcee?

Stack Skrilla: I don’t know. Maybe 2Pac. When I was young I listened to a lot of 2Pac. He was real revolutionary and I liked what he did with words and message-wise, so I started writing. I came up on Smack DVD’s and mixtapes, so I listened to a little bit of everything. I guess once I started getting used to these words and them sticking to me I figured I can do this. Why not? Why not come up with my own rhymes and kick that shit?

TRHH: That’s interesting with you being a New Yorker and having 2Pac be your inspiration.

Stack Skrilla: Yeah, I don’t know. It’s just something about him. Maybe the badass or the rebel in him. I kind of connected with him. I like what he was doing.

TRHH: On the song “For Everybody” you have a line where you say “I’m smart enough to know stupid people around me.” What did you mean by that line?

Stack Skrilla: Everybody has good advice to give but we never take our own advice. Sometimes we hang out with people we don’t need to be hanging out with, but we got a certain love for those people. It just is what it is. “I’m smart enough to know stupid people around me” is being aware of the situation. For us to get caught up in a bad one is really my fault.

TRHH: What advice have artists like Jay NiCE and Tha God Fahim given you about the music business?

TRHH: What can fans expect to hear on your upcoming full-length album “Oh You Ain’t Know!”?

Sherron Shabazz is a freelance writer with an intense passion for Hip-Hop culture. Sherron is your quintessential Hip-Hop snob, seeking to advance the future of the culture while fondly remembering its past.
View all posts by Sherron Shabazz →
This entry was posted in interview and tagged 2FOR15, 5 for 20, Bronx, For Everybody, interview, New York, Oh You Ain’t Know!, Stack Skrilla, Stack Skrilla x 2FOR15. Bookmark the permalink.