The Highlanderz: 8 Headz In A Duffle Bag 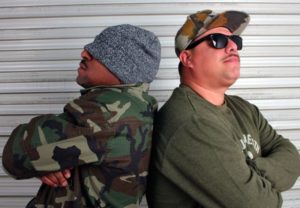 Gunnie Sanotchra and Lefty Barnes are The Highlanderz. Their namesake is taken from the 1986 film The Highlander – a warrior who can only be killed by decapitation. The L.A. based duo are both solo artists in their own right but have joined forces for a new EP.

Lefty Barnes and Gunnie Sanotchra of The Highlanderz spoke to The Real Hip-Hop about the politics in Hip-Hop, being a West Coast group with an East Coast sound, and their new EP, 8 Headz In A Duffle Bag.

TRHH: How did you two get together to form The Highlanderz?

Lefty Barnes: Basically a few years ago we were chilling in his garage drinking some brews and talked about trying to pool our resources together and see what comes out. Me and him have known each other for a long time. We’re both fans of each other’s music. We kind of figured it would be a good fit.

Gunnie Sanotchra: [Laughs] Shit man we were sitting down and putting together the hook. We wanted to be straight forward of course. I’m taking this shit different, I don’t think Left thought about this shit. I was thinking about the niggas that was trying to take over the world. You had Napoleon, you had Hitler, and you had Saddam at one point. We’re the next niggas that’s trying to take this motherfucker over.

Lefty Barnes: I took it that way as well but I was more like, “we’re tyrants on the mic.” Who are the tyrants in history? Like he said it was Napoleon, Hitler, and Saddam Hussein. I was thinking about it kind of the same way.

Gunnie Sanotchra: As you can see we don’t communicate well with each other.

TRHH: [Laughs] Why is that?

Gunnie Sanotchra: I think we’re too much alike. We’re the same sign. We’re both Leo’s. We’re stubborn and hard headed and shit. He thinks one thing and I’ll think something else.

Lefty Barnes: We’re real quick to shoot each other’s ideas down. If I say something he don’t like he’s quick to tell me and vice versa. I think we agree most of the time though. Beat selection, titles, and concepts really ain’t a problem. It’s more other stuff.

Gunnie Sanotchra: Regular shit like should we buy tequila or whiskey.

Lefty Barnes: What bar are we going to today? Shit like that. That’s pretty much what we argue about.

TRHH: Who came up with the concept for 8 Headz In A Duffle Bag?

Gunnie Sanotchra: I was tripping. We had the mixtape already called “Don’t Lose Your Head” and we wanted to stay along the same lines being The Highlanderz, taking on that title, and cutting motherfucker’s heads off. Don’t Lose Your Head was the warning and apparently somebody got stupid at some point and we got 8 Headz in a Duffle Bag now. Followed by Head Shots. So we’re just cutting motherfucker’s heads off pretty much.

TRHH: Same Faces is a song that speaks on what could be any rap circle in America. Why do you think we see the same faces at every Hip-Hop event?

Gunnie Sanotchra: It’s the politics. It’s radio politics as well as underground politics. If you’re not cool with whoever the DJ or promoter is at that time they’re not fucking with you really. You have to really go in there and snatch the mic on some fuckin’ bogard shit.

Lefty Barnes: I think too certain artists will get comfortable in that spot and are scared to move on, move out, and go to other places.

Gunnie Sanotchra: Big fish in a small pond. That’s the mind state pretty much. You’re not doing much, you’re just going to stay right there. You’re not doing it purposely but you’re hogging a spot from somebody else – a new act that could be coming out or whoever.

TRHH: Your style is so refreshing to hear in today’s climate. How did you guys develop the Highlanderz sound?

Gunnie Sanotchra: For me personally it was me going back to what it was in high school and shit like that when niggas was rhyming in the cypher. Of course you make songs, hooks, and all this other shit and do it how it’s supposed to be done. Neither one of us ever really broke the surface so it’s not too hard to get back to where you came from. What better way to set it off than doing what we love to do. I don’t give a fuck if a do a song with fuckin’ Petey Pablo – who gives a fuck? At the end of the day I know how to rhyme. I’m an emcee. I wanna do what I have fun doing. I’m sure Left is the same way. We grew up battling each other.

Lefty Barnes: I don’t know if we really developed it, it’s just us. This is what we are. We grew up on Redman, Wu-Tang, The Alkaholiks, and people that were spitting bars and had that sound. Not saying that we’re trying to copy them, I would say update it so it’s something fresh. Today everybody is doing all this mumble rap, jingles, dances, and shit like that. There are other rappers that rap with that old school flavor but it’s very far in between that anybody gets any shine like that.

Gunnie Sanotchra: Niggas don’t really mean it. This the new classic shit. The conviction is there because niggas been around. It’s not like motherfuckers came out the microwave with this shit. We been cooking this motherfucker for years.

TRHH: Coming from the West Coast have people out there been receptive to your sound?

Gunnie Sanotchra: You gotta remember Project Blowed was the epicenter for anybody coming out of L.A. So many styles was birthed there. At the end of the day it all played to your lyrical ability. If you wasn’t really saying nothing you’d get booed and the “please pass the mic” on your ass. The sound is more of a New York type of sound but as long as the lyrics are there. The crowds haven’t really been an issue.

Lefty Barnes: Everyone has been pretty receptive to what we play, what we perform, and what they listen to. We’ve gotten pretty good feedback.

TRHH: Who is 8 Headz In A Duffle Bag for?

Gunnie Sanotchra: The gritty, hungry shit. Niggas spittin’ like they’re starving still. You want to put on Trey Songz, you can do that. But if you wanna wild out and want to go back to some Onyx or some early Wu shit, you got some brand new shit right here to fuck with.

Purchase: The Highlanderz – 8 Headz In A Duffle Bag

Sherron Shabazz is a freelance writer with an intense passion for Hip-Hop culture. Sherron is your quintessential Hip-Hop snob, seeking to advance the future of the culture while fondly remembering its past.
View all posts by Sherron Shabazz →
This entry was posted in interview and tagged 8 Headz In A Duffle Bag, Anthony “L’s” Cruz, California, Gunnie Sanotchra, Gunnie Sanotchra and Lefty Barnes, interview, Lefty Barnes, Los Angeles, Saddam Hussein, The Highlanderz. Bookmark the permalink.