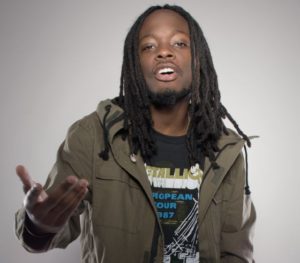 In the muddled mire of mumble rap a Hip-Hopper can often find oneself questioning the future of our culture. The reality is dope music has never left Hip-Hop. Sometimes you just have to search a little bit to find it. One reason for optimism is Oswin Benjamin. From Newburgh, New York Benjamin has made a name for himself by spitting honest and introspective lyrics every time he touches the mic. Appearances on Shade 45’s Sway in the Morning show helped to showcase Benjamin’s talents to a global audience.

Oswin Benjamin is preparing for the release of his debut album and is slated to take part in the 10-year anniversary of Soundset on May 28 alongside artists like Ms. Lauryn Hill, T.I., Mac Miller, Talib Kweli, and Atmosphere.

Benjamin recently released a 6-track EP being offered for free download titled “Hueman.” The music of Black Milk & Nat Turner and their Sunday Outtakes inspired the music on Hueman and give the project a jazzy free-flowing feeling.

Oswin Benjamin spoke to The Real Hip-Hop about spirituality in his music, his upcoming performance at the 2017 Soundset Music Festival in Minnesota, and his new EP, Hueman.

Oswin Benjamin: At the time I was making it there was a lot of stuff going on, especially in the urban community. I saw the division between black and white. It was Black Lives Matter on this, All Lives Matter, Blue Lives Matter, or whatever. At the end of the day as human beings we’re all going through the same things on difference scales. It may not be police brutality but it may be a parent missing in a household or poverty. On a certain level we all go through certain ills and qualms as human beings. I think that the main focus shouldn’t be on the issues that we face but the issues that really makes us “us” which are things like love, fear, and emotions that enable us to really be human and to experience humanity on another level outside of the wrongs that are happening.

TRHH: Why do you think people don’t look beneath the surface when confronted by a person or situation that they may not be familiar with?

Oswin Benjamin: I feel like as people we’re only a reflection of what we’ve been taught. Especially me, a lot of people that I know and friends of mine that I’ve known they’re taught to react a certain way in situations. I feel like it takes a certain level of maturity or a certain type of life experience to shift your focus. It’s just not everything that I’ve been taught. Sometimes you gotta get those answers for yourself. It’s not a bad thing giving somebody the benefit of the doubt. Not everybody is out with malicious ill intent toward you. I feel like that’s something you have to learn on your own growing up.

A lot of these ideas that are imparted into us are from other people and they can’t talk outside of their experience so they will talk about something that happened to them and warn you to be careful of certain people. Sometimes they’re right and sometimes they’re not, but I feel like you have to gain a certain level of discernment to know the type of people that you’re dealing with. I feel like if that’s not something that you’re taught or you haven’t experienced enough to be able to make those judgments on your own then you’re going to become susceptible to everything that everyone has told you over the years as opposed to you knowing these things for yourself.

TRHH: I hear a lot of spiritual and religious references in your rhymes. Why is it important to you to interject your faith into your music?

Oswin Benjamin: Ah man. A small part of me feels like it’s an obligation. I grew up in the church and my mother would say things like, “You really have to be mindful of what you say and how you live because you may be the only man of God that anybody ever sees.” Having words like that it’s difficult for me to throw that in the back of my mind and just let it wither away. I feel like it’s super important. It’s a message that’s not spoke of enough. I feel like the airwaves are filled with a lot of misogyny and vanity. Very seldom do we look back on the things that are really important, like your faith, the way that you view yourself, the way that God views you as opposed to the way an ex-girlfriend may see you or somebody that doesn’t know you who may try to label you. Those are the things that are not important and again, it’s not spoken about enough. I guess that’s my contribution. I’m going to let everybody know the things that I was taught. Love is important. God loves you, I love you, and that’s a message that not enough people hear. It’s my job to put that in the music.

Oswin Benjamin: The community I was living in. Just looking around at community, my friends, and myself. I just got a savings account. I get money and the first thing I wanna do is spend it on sneakers. I know a lot of friends that don’t have no suits. They go to interviews with sweaters and sneakers on because they don’t have suits, but they’ll have pistols. That’s my reality. That’s the thing that’s around me. It’s got to come to a point where there’s got to be more than that. Why is this? Why is this all we’re about right now? It’s got to be something deeper than that. Dear Black Man is me looking outside at my surroundings.

TRHH: That’s deep, man. As you said that it reminded me of when I was younger I went on a job interview and I wasn’t dressed properly. I ended up getting the job, which is surprising, but looking back I’m 41 now and I go, “Man, what was I thinking?” Nobody ever told me, “This is what you do,” or “This is how you do it.” I think that’s what a lot of young people are missing – direction and guidance. I had parents but my parents were always working or busy trying to find ways to put food on the table. I took care of myself to some degree because they were always trying to keep the lights on. They never had time to tell me to do this or that and I think a lot of people are dealing with that today – probably more than when I was younger.

Oswin Benjamin: For sure. I agree 100%. A lot of latch key kids, man. It’s a harsh reality. A lot of us are forced to grow up and be adults as children because of circumstances like there being nobody there to watch us because they gotta take care of the adult responsibilities so we have to raise ourselves. In doing so it’s a lot of trial and error. I definitely understand that.

Oswin Benjamin: Ah man, it’s a couple people. From the very, very beginning though I’d have to say Lupe Fiasco. That was the guy that kind of got me started. I started listening to rap music real late because I grew up in the church. With my mother we couldn’t listen to nothing that wasn’t gospel. If it wasn’t Donnie McClurkin, Kirk Franklin, or Matthew Ward we wasn’t listening to it. I listened to Lupe the first time at my brother’s college. One of his dorm mates was playing American Terrorist from the Food & Liquor album. I was like, “Yo, he is ridiculous.” Then I went back and listened to some more of his stuff. He was telling stories. His imagination is crazy. That’s what really forced me to try it out. I would dabble in rap and stuff before that trying to freestyle and mimic people but hearing it done on that level I was like, “Wow, let me try it out,” and it ended up sticking.

TRHH: How would you describe your style?

TRHH: You’re performing at the Soundset Festival this year. What does it mean to you to take part in Soundset?

Oswin Benjamin: I can’t even explain that to you. When I found out I was overly excited just to see my name on the bill with legends like Lauryn Hill, Pete Rock, and Bobbito. They’re kind of like mythical creatures that you only hear about. I never thought I’d share the same stage with them or just be on the same bill with people like that. For me it’s extremely humbling. As excited as I am I’m extremely nervous at the same time. This is definitely a milestone for me.

TRHH: What’s your ultimate goal in the music business?

Oswin Benjamin: It’s a couple of goals. One of them, I know I can’t change the whole world but I want to allow people to see that there is more than what’s in front of them. I feel like the perspective switch on a lot of things is very, very important. So any way that I can push that envelope and just push Humanism. It’s alright to feel how you feel. You don’t gotta be at the top of your game all the time. It’s alright for you to feel low and it’s alright for you to feel good. Aside from that I just want to make sure that everybody that’s looked out for me is taken care of. I want to be able to build a legacy that my kids and my parents will be proud of. I want to make a stamp in this world, not as one of the greatest to ever do it, but you can look at Oswin and say, “He was real. Everything that he did was real and came from his heart.” That’s ultimately what I would want.

Sherron Shabazz is a freelance writer with an intense passion for Hip-Hop culture. Sherron is your quintessential Hip-Hop snob, seeking to advance the future of the culture while fondly remembering its past.
View all posts by Sherron Shabazz →
This entry was posted in interview and tagged Dear Black Man, download, EP, free, Hueman, interview, New York, Newburgh, Oswin Benjamin, OverDeliver Ent., Society Music, Soundset, Soundset Music Festival, The Soul Pt. 2. Bookmark the permalink.