Posted on February 5, 2018 by Sherron Shabazz 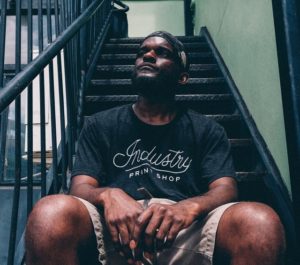 Producer and emcee Von Pea is constantly on the grind. As one half of the rap group Tanya Morgan Von and his partner in rhyme Donwill released their fourth full-length album YGWY$4 (You Get What You Pay For) in the middle of 2017. Von soon closed out the year by joining forces with D.C. production duo The Other Guys for their second joint album titled “The Fiasco.”

The Fiasco is produced entirely by The Other Guys with one track handled by Pea himself. The 11-track release features appearances by Donwill, Rob Cave, Skyzoo, J-Live, Verbal Kent, and Wordsworth.

The Real Hip-Hop spoke to Von Pea about The Fiasco, what it was like working with The Other Guys, and why he took a different lyrical approach for this project.

TRHH: Why’d you title the new album ‘The Fiasco’?

Von Pea: Somebody else was asking me that and when I was giving them the explanation they said, “It just sounds like you was getting “woke” which made me laugh. It’s just me realizing a lot of things. Music and the world in general is kind of a fiasco. The things that people pay attention to – scandals, reality show nonsense, and blahzay blah is on the “all press is good press” tip. I just said let’s name the album “The Fiasco” but not be a part of it.

TRHH: Can you pinpoint a time when you got fed up with the fiasco?

Von Pea: Anybody that follows politics they’ll tell you how they feel about the current presidency, but as far as entertainment goes, now it’s easier to get signed off of a meme or something. You’ll get a record deal off of meme versus if you actually make music. You don’t have to make music. They’ll get you a song and it’s crazy.

TRHH: How would you compare this album to your first album with The Other Guys ‘To: You’?

Von Pea: The first one had a warmer feel to it. I don’t remember exactly when we put it out but we started doing the videos in the spring or summer. It just had a warmer feel to it to me. Both of these albums is the same genre as far as sampling goes. There’s still some jazz stuff on the new one, but the new album definitely has a colder sound. It’s more of a winter album to me. The first one had that vibe a little bit, but it’s more of a non-winter record. This record is more built for snow on the ground.

TRHH: The song ‘Talent’ features some heavy hitters on it. How did that come together?

Von Pea: Years ago I met J-Live through Sucio Smash at Squeeze Radio. He played Tanya Morgan’s music for J-Live and I ran into him on a random New York day out in Brooklyn. We were talking and built up a rapport. Through the years I would run into him. Tanya Morgan did a record on his album, Around the Sun. We did that record and I wanted to get him on a Tanya Morgan song. He’s so clever and so ill. When we were putting the Talent record together I started writing the rhyme and I kept saying what’s a talent and what’s not a talent. I didn’t have that idea as I began to write but it’s just where I went. Two bars became four and I just wanted to keep it going.

I said, “Man, J-Live would kill this,” so I sent it to him and he agreed to do it. Joe from the Other Guys was doing a show with Wordsworth in D.C. He met him and he was playing the last album and Wordsworth was like, “Who’s that? That’s dope.” He said, “That’s us. We got this album ‘To You’ and actually we’re doing another one with this guy Von Pea.” Wordsworth was like, “Man, if y’all need me for anything I’m down,” so he came through and got on the song. Verbal Kent was down because he’s doing a lot of music with the Other Guys too. It’s just all these people who have a common respect for each other coming together to make something dope.

TRHH: How is working with The Other Guys different from doing a Tanya Morgan album?

Von Pea: It’s totally different in terms of personalities. Everyone has their own workflow. Me and Donwill will know what we’re working on without having a full on conversation about it. Our concepts and ideas come from just hanging out and we stumble on to them. With the Other Guys we sit and plan out a little more. Joe may quote unquote “disappear” for a week or two and come back like, “Yo man, I had this beat and I remember you said you wanted to do a song like this,” and we just work like that. With Don we just hang out and the songs just happen. I think that’s because Don and I have been down with each other for over 15 years now so we just tie it in like that.

TRHH: Why did you release The Fiasco so soon after YGWY$4?

Von Pea: Funny thing with that, YGWY$4 was done a year ago but we had to change engineers. We were trying to get this album out forever! As a creative if you have one thing that’s held up you don’t just stop making music [laughs]. I was working on this Fiasco album all year and the Tanya Morgan one had been done for a year. We were going to put The Fiasco out in February and something happened as far as distribution – the label stuff. They thought it would be best if we could push this record up. I felt like it was a winter record anyway so if there is more time to vibe with the record anybody that likes it and keeps listening to it they’ll have more time to attach the album to the winter time, versus if we put it out in February and the next thing you know it’s getting warm and it just doesn’t fit anymore. It may not matter to some people but I definitely felt like this is more of a winter record and I wanted the experience of it to be attached to that.

TRHH: What would you say are the best and worst parts of being an independent artist?

Von Pea: Just as far as a team and everything. You have people that can put a record out and they’ll grab all the big interviews and radio spots. They might even have a commercial. It’s not like it was before where it was clear that these guys are on the underground and these guys are on the radio. You look at incredible stuff that Chance the Rapper can make happen with the full on team that supports. A lot of indie guys don’t necessarily have it like that.

TRHH: On the song ‘Louie BK’ you said, “Rap hit a generation gap and it lost me.” Explain what you meant by that line.

Von Pea: “When it lost me” not necessarily as a fan but as a part of it. You catch yourself in the drift of things drifting apart. I feel like a lot of people made the mistake of running with the concept of it being a young man’s game when they were young men. When they weren’t young men anymore they still wanted to keep it with their generation. You have people that say, “The stuff they’re doing now is not real Hip-Hop,” under that same token you have the younger guys that will say, “It’s still a young man’s game.” It’s just a part of the divide and getting lost in the divide. Not so much me as a fan getting lost in Hip-Hop, but me as a creator feeling lost in that shuffle. I’m caught in between because I’m not of the 90s generation and I’m not of the early 2000s Rawkus generation, but I’m also not with the A$AP crowd and them either. It’s a lot of us somewhere in the middle.

TRHH: Tell me if I’m wrong, but I feel like lyrically on this album you took it to another level with the punchlines and stuff?

Von Pea: I chose to focus on that again. Another thing I tried to tap into with this record was to go back to before people had actually heard of me before I found my direction with Tanya Morgan. You notice what songs people like the most when you’re trying to get any listeners or fans and you go in that direction. I noticed the stuff that I would do that fit more into the Native Tongue mode would get the most love. But early on I was finding myself and it would still be the things people know me for now, but it would be more punchline-y and trying to sound a little bit more like the street rappers.

I’m from Bed-Stuy, Brooklyn so me and my friends would be outside in the little cyphers and you had to have your punchlines and deliver in a certain way. When I began to make music I didn’t necessarily stay in that same direction. I just wanted to tap back into that a little bit on this record. I heard people say I was talking my ish more on this album [laughs]. I’m just tapping back into that zone a little bit and trying to give this record its own direction because I knew that it would come out around the same time as the Tanya Morgan one and I didn’t want it to be ten more songs that could have fit on the Tanya Morgan album.

TRHH: Who is ‘The Fiasco’ made for?

Von Pea: The Fiasco is made for fans of East Coast street Hip-Hop. Like I said, cold weather raps. It’s for people who are fans of guys like Wu-Tang, the Firm and blahzay blah. I’m not talking out of terms of who I am. I’m not stepping out of character, I just wanted to make something that fit a certain mode. We never necessarily really tapped into it so I wanted to do that with this record but still be me.

Purchase: Von Pea & The Other Guys – The Fiasco

Sherron Shabazz is a freelance writer with an intense passion for Hip-Hop culture. Sherron is your quintessential Hip-Hop snob, seeking to advance the future of the culture while fondly remembering its past.
View all posts by Sherron Shabazz →
This entry was posted in interview and tagged Brooklyn, HiPNOTT Records, interview, New York, Oh Yeah, Tanya Morgan, The Fiasco, The Lessondary, The Other Guys, Von Pea, Von Pea & The Other Guys, Washington D.C.. Bookmark the permalink.