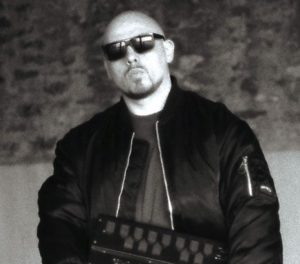 Venom is one half of the French production duo Ninjustice alongside Kyo Itachi.  The beat makers have worked with acts like Ruste Juxx, Marquee, and Blaq Poet. Venom has now broken out on his own for a concept album on his Marvel Record label called “Ruff N Tuff.”

The Real Hip-Hop spoke to Venom about how he got into production, which artists he most wants to craft beats for, and his new album, Ruff N Tuff.

TRHH: How did you come up with the concept for Ruff N Tuff?

Venom: I’m a VHS man. I love movies as much as I love music as I love comics. I want this album to be like an action movie that would’ve hit the box office in 1992 with Marc Dacascos and Van Damme in it. What I like the most in movies is not the action, it’s the feeling, even if it’s a B movie, which are the best in my opinion. I like music in movies and dialog. That’s why there is a lot of skits in Ruff N Tuff. Ruff N Tuff is a record that everybody can find related to something in their life. Beyond the action teasing on the cover, it’s a metaphor about doing beats to beat your worst enemy — yourself. If you win against yourself, you win a life. It’s a fight that takes place deep inside yourself. To me, music has always be an inner fight, when you are face to face with your machine, you have to demonstrate your skills in front of your influences. It’s in your head but you feel them because of the impact they had on you through their art. It’s forbidden to bite their moves, so you create yours with a little base from them. It’s the training. But if you just copy, you lose.

TRHH: How difficult was it to secure all of the verses for Ruff N Tuff?

Venom: It was very smooth, everything came naturally, because I know or already worked with a lot of these emcees, and some are friends with few artists I was looking for, so they plugged me.

TRHH: Do you have a favorite verse on the album?

Venom: Not really, I built this as a whole package so I see it like this. It’s hard for me to separate individual tracks from it. Lyrics wise I like what Chocolate Tye of Shadez Of Brooklyn said on “Wrong Time” about life, “Figured out a plan, ran with it…”, “…took a L to head while getting blessed…”  It’s something I lived in some ways.  Also I like the energy Madman from F.O.D used to open on “Too Tuff To Die.” I always wanted to do a joint like this — strong voice, hardcore spitting on 80’s funk.

Venom: My 5 brothers and sister and me swam in music since birth. My father was a jazz rock drummer. I grow up with a lot of music, from that time I can remember clearly The Police, D Train, Michael Jackson, Huey Lewis & The News, B52’s, Billy Idol, Kool & The Gang, Yes, Santana, Deep Purple and Prince. My mom was a fan of Prince. With Hip-Hop I became obsessed with producers, men with machines, making music like a scientists, layering things that don’t usually belong together, in the back of the emcee but carrying a badass energy. I searched new names to find on every credit or shout outs, then learned to recognize every style, every producer just by hearing the start of the song. That’s the producers I looked for. Producers with identity. Coming from a hard zone, it took me time to find money and afford some low budget equipment, as an E-mu ESI 2000. I started with that. Nobody showed me how to produce or took me under his wing. My real brother Mc Zombi and me learned how to do beats by ourselves.

Venom: Ensoniq ASR-X and EPS-16+, sometimes I use my EMU ESI 2000 in addition, two Gemini turntables and a mixer.

TRHH: How is it different doing an album without Kyo Itachi?

Venom: Actually Kyo and me already did records on our own before we formed Ninjustice, me with my label Marvel Records and he with Shinigamie. We’ve know each other for a longtime. He’s my biological brother, we walked together, with Azaia too, which I released his album “Re-Animations” on Marvel Records. One day we decided to combine our forces and create the production duo Ninjustice to produce some artists. So I’m already used to making albums. It’s not really different, because I always come with visions for our Ninjustice records, he follows me and adds his ideas. I’m very precise on how I want a record to sound. Sometimes I’m very hard to work with because I’m picky as hell. But at the end of the day, only the record counts.

Venom: Smoothe da Hustler is an authentic emcee, with crazy rhyme schemes and a rugged voice, my beats are made for this type of voice. His first album produced by one of my favorite Hip-Hop producers D/R Period is a top 10 classic to me and I’m sure I would make him a monster for a second album. And Redman is my hero, besides The Guru, rest in peace. In 2017 still nobody can outshine him on a joint.

TRHH: What do you hope to achieve with Ruff N Tuff?

Venom: The concept of the record says it all. I come to tell the world my name. Winning or losing is not important. I just want to show to my peers and my influences what I can do and earn their respect. I want to show that a man who is coming from a hard zone of Paris infested by drugs and violence, marked to lose, can use his love for music to have a future. And if this album don’t kick the door, the guy behind the door will remember me, even if he don’t want to open and let me in. I’m proud of that record — it has many layers of metaphors.

Sherron Shabazz is a freelance writer with an intense passion for Hip-Hop culture. Sherron is your quintessential Hip-Hop snob, seeking to advance the future of the culture while fondly remembering its past.
View all posts by Sherron Shabazz →
This entry was posted in interview and tagged France, interview, Marvel Records, Ninjustice, Paris, Ruff N Tuff, Venom. Bookmark the permalink.