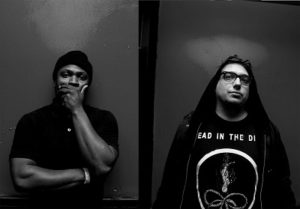 The Real Hip-Hop chatted with ATD and SKECH185 of War Church about their unique sound, their growth as artists, and their new album, Gunship Diplomacy.

TRHH: Explain the title of the new album, Gunship Diplomacy.

ATD: Gunship Diplomacy refers to “Big stick ideology”; another way of saying “Walk softly, and carry a big stick.” It refers specifically to the practice of displaying naval superiority during political negotiations with foreign entities. In short, it’s the act of parking a gunship off the coast of another nation with whom you are negotiating. For me, the record’s title is an expression of the frustration we feel politically and with the music industry, in general. The record is our gunboat, the threat of our superiority [laughs].

SKECH185: This record is very uncompromising. It doesn’t placate to a particular audience nor does it beg for acceptance in anyway. It was put together over a good stretch of time so all signs of trying to keep up with current trends was nixed very early in the process. Because of those elements we needed a title that fit that school of thought. When ATD suggested that all I could say was “fuck yeah.” In all seriousness, over the period between New Age Middle Finger and Gunship Diplomacy I felt like indie rap became more visually artsy without taking steps in that direction sonically and in large part became very vanilla in approach. Everyone is overly branded and media trained. Excellent merch, great logo’s but lacking heft in terms of content and subject matter until the rise of the next guard 3 years ago. That said, this is an assault on the adopted frailty of the indie rap scene and self-victimization championed by many socially conscious people. You either step out of the way or get left as rubble.

TRHH: How is this album different from New Age Middle Finger?

ATD: To me, Gunship Diplomacy is much more mature record than N.A.M.F.; I mean that in terms of how we produced it and it’s production quality in general, and the content that lies within. When we made N.A.M.F., we were two broke kids in college and, to me, that life experience is ingrained in that record. Now, we’re both in our 30s, I mean, SKECH was the best man at my wedding. We’ve gotten older. That comes with some bonus attributes like more patience with specific projects and a slightly greater social and political awareness. I think those old man attributes show themselves throughout GSD.

SKECH185: In many ways, this album lacks the insecurities of N.A.M.F., whereas we were testing the waters of our sound and technique on the first one but now we know who we are. I truly believe becoming more mature as men helped shape the writing in regards to our willingness to say “fuck it” and go for the unfamiliar. We threw traditional rap formats out of the window and tried to make something that was foreign to us because we are aging weirdoes and we care less about peer approval.

Lyrically, there is far more ownership of the man that I have become than it was on the first record. Ownership of ones message is a very big thing to me because I’ve seen the positive and negative effects my music has had on people in my life. I don’t play it safe but I respect the power of words and don’t throw anything out there for shock value in the way I think I did a few times on N.A.M.F.

TRHH: What are the origins of the name “War Church?”

ATD: Christianity strangely enough. It started as a conversation in the Flat Iron in Chicago. We were talking about the origins of the Christian faith over cheap beer and whiskey. Recently, I’d seen a documentary about a religious scholar that theorized that Yahweh, the Christian god whose roots begin in, at least, the Canaanite pantheon if not beyond that, may have initially been a god of war. I don’t recall the exact conversation but we both agreed it was interesting that all of these people professing this supposed faith of peace would really be worshipping an old god of war every Sunday, at which point SKECH shouted “War Church!” and the project we were already working on took on a name.

TRHH: Was it difficult for you guys to do this album being in different cities?

ATD: For me, our process is a curiosity. I’m not really aware of anyone else that works how we do but, I mean, it’s sort of a recent development in human history that we are even able to work this way; over the internet. We tend to, sort of, go into our own black holes or silos and work solo and, after a few weeks or months we’ll share something. I’ll hit his inbox with a beat or he’ll hit mine with a recording or some lyrics and we’ll just kind of go from there; sharing notes, re-working ideas, et cetera.

SKECH185: I find it kind of magical in the respect that without speaking to each other about our progress or process, we will turn around and have things that sync up. In truth, I write most of my rhymes without having a beat and he doesn’t sequence his beats for regular rhyme structure yet when he sends them to me I, more or less, have verses of the same tone structure fairly similarly to his sequencing. Of course there is reworking but not as much as you would think. Thanks to the internet, we can talk and bullshit or chew the fat about society at large and that friendship I believe forms the bridge between cities.

ATD: In terms of its difficulty, I don’t know. We definitely don’t have a lot of direct contact during the albums actual, physical development, if you know what I mean. I’m not there when he records a verse, he’s not around when I’m making a beat. That comes with it’s own set of inherent problems, but I don’t know that I’d say it’s especially difficult given the availability of cell phones and the internet.

TRHH: ATD, what’s your production set up consist of?

ATD: I think most producers would laugh at my set up, if it even qualifies as one. At this point, it consists of a Macbook Air and an $80 USB record player. I predominantly use Ableton as my DAW but, on occasion, I’ll fire up Reason. Inside of those, I use a few different software synths. That said, most of Destroyer and Gunship Diplomacy use the standard Ableton kit. I’m content to mouse-in samples, synths, drum hits, and use my QWERTY keyboard as a midi-controller. I mean, I’ve had various pieces of gear over the last, something like 17 years, but at the end of the day I’m just not a gear head. It’s not about that for me. The tool is just the means for an end result.

TRHH: How would you guys classify the sound of War Church?

ATD: I have no idea. I listen to this record and can’t really point out its origins. In a way it feels alien, even to me. It’s aggressive, it’s frenetic, it’s noisy, it’s socially and politically aware. It’s something I’d like to see Hip-Hop in general move towards; recapturing that anger and class consciousness it once had in acts like Public Enemy.

SKECH185: I agree. The goal was to make something as unfamiliar to the genre as possible. It’s uncompromising, intense, artsy as fuck, intelligent, goofy and tries not be referential. Because of that, and laziness, we haven’t really come up with a catchy name yet [laughs]!

TRHH: Who is Gunship Diplomacy for?

ATD: For anyone with $9.99 [laughs]. In all seriousness, I think it’s for people like us — frustrated people who see in the world so much ignorance and ill will towards men.

SKECH185: I used to say we make music for people who read books and lift weights [laughs]. Perhaps it’s for the folks who feel like they can almost see the hidden cameras capturing the mundane and magnificent for the entertainment of an unknown audience.