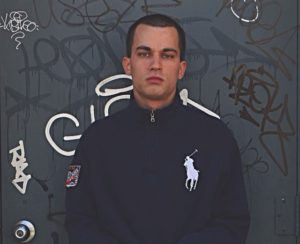 Daniel Son and Saipher Soze are two emcees from Toronto, Ontario, Canada. While they’re both young in age they are longtime musical collaborators. Their lyrics and flows are reminiscent of a time when groups were at the forefront of Hip-Hop and each members voice complimented the other. The undeniable chemistry of the Daniel and Saipher led to a union with production team and record label Crate Divizion. The result is an album called Divizion Rivals.

Divizion Rivals is a free project tailor made for those that love raw beats and rhymes. PhybaOptikz, Giallo Point and Vic Grimes of Crate Divizion produced Divizion Rivals. The 14-track album features appearances by Skuddy Rankz, Blizz & Raspy, and SmooVth.

The Real Hip-Hop spoke to Daniel Son about his history with Saipher Soze, the Toronto rap scene, and his new album, Divizion Rivals.

TRHH: How did you and Saipher Soze link up for this project?

Daniel Son: First off me and Saipher made our first track together when we were 13 years old. We met when we were in grade 8. We’ve been building ever since then. We never actually released a tape before, so this is the first time we’re dropping a tape. We’ve got hundreds of songs we made over the years. For 14 years we’ve been rhyming together. We’re both 27 now and we linked up when we were 13.

TRHH: Why did it take so long to do a project?

Daniel Son: We never really had the situation that we have now. We have a team of producers that we work with – The Crate Divizion. We just never really had the vision. Now we have the vision and understand what we’re trying to do with the music. The situation is proper now. We’re dropping on Crate Divizion’s independent label. It’s a good look. We’re both at the top of our game. We’re focused. We pretty much just banged out this tape in a month.

Daniel Son: I’m a Washington Redskins fan and he’s a Giants fan. Off of that and the label and producers are named Crate Divizion so we just flipped it like that. On the cover I’m in all Redskins gear and he’s in all Giants gear. We’re kind of bringing that theme across and flipping the words a bit.

TRHH: How was doing this project different from doing The Gunners Tape?

Daniel Son: I didn’t really know that I was making The Gunners Tape until I started getting a collection of tracks. Really since the summer time I’ve been working on three albums. Each one is produced by each of the Crate Divizion producers. Gunners Tape was produced by Giallo Point from London, England. Really I was just recording a whole bunch of joints. The producers were flooding me with beats. I was going to the studio, that’s another different aspect, actually going to the studio for that album. I was going to a studio called Number 9 Studio in Toronto. Drake and his people are always in that studio. That studio is seriously official.

This whole tape I recorded at my crib and mixed the whole thing. We’re handling all the recording, mixing, and mastering ourselves. With this one we had the vision. With Gunners Tape I had a good collection of songs. I put it together and didn’t know what to expect. When I released that DJ Eclipse picked it up, DJ Premier, and PF Cuttin’. That made say, “I have to go real hard now.” I went to Soze and was like, “Bro, I’m not trying to make this shit about me. We gotta do a tape so we can both get the shine.” We got the vision now. We’re sitting down doing all of these tracks together. I’m banging out my verse and sending it to him and he lives five minutes from the crib so he’ll fly over and knock out the track just like that.

TRHH: Talk a little about the single Test Drive.

Daniel Son: Test Drive was one of the first tracks that we recorded. It’s crazy, I just moved into a new spot and my landlord is the best reggae artists in Canada – literally he’s the number one reggae artist in Canada. Through him I’ve been meeting a lot of local legends and a lot of the OG’s. He’s exposing them to my music and the love I’ve been getting from all the OG’s made us want to put that video out first because the OG’s say we got that “bring ‘em back” type of thing. We wanted to start it out with that, set the tempo off right, salute the OG’s in the game, and move forward from there. That track is vintage Vic Grimes on the beat. That’s his alley all day. That get away pursuit music is what we specialize in.

TRHH: We always hear about Drake when it comes to Toronto but not much else. What’s the Toronto Hip-Hop scene like?

Daniel Son: You’re right about that. Drake has shined a lot of light on the city, though. The scene is really inspired right now, even the music isn’t really my style of music. There’s a lot of youngins that are popping off right now. There’s this cat Top5, he’s like 17-18 years old and he just did a track with Styles P. He’s from a big hood out here called Jungle. He brought Styles P to Jungle. I don’t think Styles has really been to the hood in TO and they brought him to the hood. There’s some people that are popping but they’re really trying to make drill music. All the youngins out here are trying to copy Chicago as heavy as they can, even down to the language.

Everybody’s an opp out here now and the shorty’s are all thots. All the youngins that are really popping and getting views on YouTube are inspired by Chicago and making Toronto-themed drill music. There’s not a lot of people like us that are making music like we’re making, that’s why I know our shit is gonna pop soon. There’s some cats but they had their chance. There’s some people that were making our style of music while we were still coming up. They had their head start on us, but it’s our time now. They had their chance to make it pop now we’re gonnna make TO pop with this classic music.

Daniel Son: Nas, Redman. When I was young I start doing the text battles when I was 9 years old. My uncle Danny is from Harlem. He had a record label called Bulletproof Records. They won the Canadian version of a Grammy for reggae – a Juno. He had a studio in his basement. Every time I would go over there for family functions I would see the studio and he had old Hot 97 tapes of Big L freestyles and my cousin would bump that. I don’t even know what made me start rapping. I just know I would bite rappers lyrics on one message board and use them on another message board. I got caught and I had bit so many rhymes already that I knew what it took to make an ill verse. I owe all my bars to text battles.

TRHH: Text battles? Explain to me what that is.

Daniel Son: I used to go on raboards.com. My name back then used to be Technique. You sign up and people would put out open challenges so you say “Let’s battle.” You set a little due date, write your verse trying to play off the man’s name or where he said he’s from – that’s how I learned how to make punch lines – straight up. When I was little I used to take the Freestyle Friday verses. That’s how I got caught stealing bars off Freestyle Fridays and a man called me out. I was like, “I ain’t gotta bite no more. I already know what it takes to make an ill verse.”

That shit was big, bro. I was like the youngest text battle champion of all-time. I was literally like 9 years old battling grown men and shit. What’s funny is they don’t call it free styling, they call it “key styling.” There used to be MSN chat rooms where motherfuckers would go there and battle. When I was young I didn’t want to do records, I wanted to be a ghostwriter. I recorded my first track at 12 years old. My pops bought me a mic and I was using Cool Edit Pro. I mastered that shit by the time I was 14 years old. That was the life back then, bro. Ever since I was a little kid I’ve been going hard with this shit.

TRHH: What can people expect to hear on Divizion Rivals?

Daniel Son: Divizion Rivals has a good mix and a good balance of everything. It doesn’t matter what type of style you go there for. There’s jazz samples, slow tempo, high tempo, there’s joints with banging drums, there’s joints with no drums, there’s all types of saxophones. We make our vintage getaway driver music. We make music for people to steal boats, helicopters, all types of shit like that. High pursuit speed chases. Giallo Point and Vic Grimes handle 50/50 of the producer duties. My dude PhybaOptikz only has one joint on there. The beats are crazy.

My dude Soze is about to show why he’s the illest. I’m just here trying to set up the alley oops all day. I’m setting up the assists. People kind of know about me, but my man is about to jump on the scene in a big way with this tape. Everybody that knows us is saying, “Wow, it’s his time.” He’s ready to step into the spotlight. I’m excited for him. This is some good shit. There’s going to be a track for everybody on there. I wouldn’t even say that we’re rappers no more, we’re more like jazz vocalists with how many jazz-inspired themes there are. It’s good music at the end of the day – original production, good sampling, the bars are there, and the hooks are there. We got like two features and the rest is just us. It’s not a feature heavy tape, it’s just us going back and forth – good shit.