Young Black and Gifted: The Gift

Posted on February 3, 2020 by Sherron Shabazz 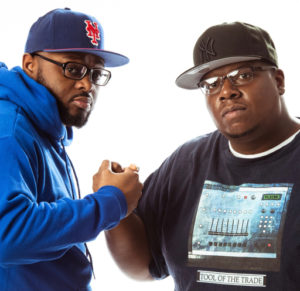 Producer, Kidd Called Quest and emcee, Azariah are Young Black and Gifted. The Rochester, New York artists closed 2019 and the holiday season with a present in the form of a 12-track release called “The Black Gift.”

The Black Gift is produced by Kidd Called Quest with one track handled by Jay the Gifted 1ne. The project comes courtesy of Young Black and Gifted Music and features a guest appearance by frequent YBG collaborator, Jae Hussle.

The Real Hip-Hop chatted with Azariah and Kidd Called Quest about The Black Gift, the power of the messages being delivered in Hip-Hop, and their upcoming album, Second Coming.

TRHH: Why’d you call this project The Black Gift?

Kidd Called Quest: The Black Gift is basically an EP with a bunch of songs that we recorded for our upcoming album, Second Coming, that didn’t actually make the cut. I was trying to figure out a way to present this music so we wouldn’t sit on it so long. I hit Az up and said “I think it will be a dope idea if we put out a project around Thanksgiving of Christmas and call it ‘The Black Gift’ so it will be a little taste of some music and prepare them for the project that we’ve got coming.” We talked about it and came to an agreement on the songs we were going to use and for the new people tuning in we threw a couple of joints from our recent project on there so people can get used to us, feel the music, and understand where we’re coming from.

TRHH: What’s the difference between The Black Gift and the Long Time Coming album? Do the new songs mesh?

Azariah: The content is still the same. The message is still the same. The delivery and potency is just improved. How I do what I do has evolved in time. A couple of people told me that their favorite joints were the throwback joints. Them joints was dope because the message is still there in terms of what I’m conveying through the lyrics. It’s funny because Long Time Coming came out in 2013. I recorded them joints in 2011 and the Eric Garner and Trayvon situations happened later. That was speaking to that before that even happened without doing it intentionally. It’s just where I was at, at the time. A lot of the newer stuff is still me. As an artist and an emcee I’m open and I’m honest. I’m not Superman. I show depth and vulnerability – things that are relatable. At the end of the day it’s like, this is what moves me, this is why I do this, this is what I’ve seen, and this is where I’m coming from. So, if you can get with it, that’s what’s up. If not, everything ain’t for everybody.

TRHH: What inspired the single “Ain’t Nothing New”?

Kidd Called Quest: Pretty much the grind that we’ve been on for the last 7-8 years. We’re letting everybody know that we’re still doing music together. Everything that’s going on is nothing new to us. We’ve been doing this. In 2012 when we dropped Long Time Coming a lot of people were picking up on our projects and stuff with the write-ups and interviews. We’re letting people know that we’re still doing what we’re doing. It’s nothing new. We’re just going to keep evolving and stepping up to a new level every time we’re doing something.

TRHH: On the hook to “More Than Music” you say “rap is more than music/kids are easily influenced/watch your movements/show growth, keep improving.” Why do you think the messages in Hip-Hop have decreased over the years?

Azariah: It’s programmed. It’s weaponized. It’s on purpose. You get the term “conscious” and it has a negative connotation to it, just like geek, nerd, or somebody that wears glasses. It’s not about being preachy, but in the late 80s and early 90s it was a lot of diversity in music. It still is a lot of diversity to this day, but now things is over-saturated and these people definitely have an agenda that they’re pushing in terms of the execs, the labels, and the way they want the people to be. They want them dumbed down. They want them doing dumb buffoon things. That ain’t nothing new. That’s been going on since the creation of this corporation, or this nation. It’s good to put music out there and try to have a balance and get my point across in a way that suites me, but in a natural organic way that I’m not coming off self-righteous like I’m better than somebody else. I’ve been through things and I’m human like everybody else. I know one thing, I’m inspired by stuff that makes me want to get up, work out, or write a verse. Dudes that’s serious with serious content. Not this fluff, buffoon, patty cake, baker’s man stuff.

TRHH: You mentioned writing a verse, what’s your writing process like?

Azariah: My writing process is real natural. I don’t force nothing. I don’t write without music. Whatever Quest sends me, I just let it take me there. If I formulate a couple of lines and I’m saying this and that, I can stay on top of the subject. Quest may give me a loose concept and I can build on from that aspect and standpoint as well.

TRHH: Quest, what does your workstation consist of?

Kidd Called Quest: I make beats on the Maschine and the MPC. I’m an MPC head – I’ve been on that since I was 14. I track my beats in Pro Tools and mix everything down. I also use a couple VST and stuff, too. I have a real simple set-up. I do a lot of crate digging, too. I’m heavy into sampling and all that.

TRHH: Do you prefer Maschine over the MPC?

Kidd Called Quest: That’s a tricky question. Somebody just asked me that the other day. I always tell people looking to get an MPC, if you get a throwback one, they all have their ups and downs. But if you’re getting a newer one with the software like Macschine, they both have their ups and downs. I always thought the Maschine workflow is faster, but the MPC software has a way better, warmer, natural sound than the Maschine. It’s a toss-up, but they’re both good. I like them both.

TRHH: What’s your process like working together as YBG? How do you handle criticism if you don’t like a rhyme or a beat?

Kidd Called Quest: Whenever I send Az a beat I always ask him the day after “Yo, you feeling those?” If he’s not feeling it I’ll get something else to him. He’ll write the song down, we’ll link up, and he’ll spit the verse for me. He’ll ask me if I’m feeling it and I’ll let him know. We got a natural vibe. We already know. Sometimes I’ll throw out a concept or let him go and do him.

Azariah: I agree with everything that my brother Quest is saying about our synergy and chemistry, but when we get criticism from people that are listening like blogs that might say “this sounds dated” or “this is boring” I don’t really care about none of that, because I’m not here to please everybody. Whatever is hot, it was a point that it was like a shift before it was hot, and it’s hot now. I just take all of that with a grain of salt and not be emotional about it. Everyone is different and likes different things. I’m just going to keep doing what moves me.

Kidd Called Quest: As far as critics and all of that, I really don’t pay that no mind. Either you like it or you’re not going to like it. At the end of the day, everybody’s got different tastes and preferences. I told a lot of heads that hit me up trying to get stuff like “I need something that sounds more up to date” what you like is what you like. I’m not going to sit here and argue with you about it, but if you like it, you like it. If they don’t, they don’t. At the end of the day we’re just going to do us. We’re going to keep doing it and people will catch on eventually.

TRHH: What can fans expect to hear on Second Coming?

Kidd Called Quest: Second Coming is definitely about to be something special. Az definitely has a message that he’s telling people, and like I said, we’re doing us.

Azariah: Second Coming is definitely a little bit more upbeat than Black Gift. Not in like a good or a bad way. It’s just more to the point and more aggressive. As you know, upstate is really doing their thing right now – Buffalo, Rochester, Syracuse, Niagara Falls, and all of that. With Second Coming it’s something different. It’s still in that same realm of grittiness and in your face, but it’s just a different twist. The narrative that’s being pushed to brothers is like “You gotta do this to be real” and I just play the devil’s advocate in a way and show something else.

Sherron Shabazz is a freelance writer with an intense passion for Hip-Hop culture. Sherron is your quintessential Hip-Hop snob, seeking to advance the future of the culture while fondly remembering its past.
View all posts by Sherron Shabazz →
This entry was posted in interview and tagged Ain’t Nothing New, Azariah, interview, Kidd Called Quest, Long Time Coming, More Than Music, New York, Rochester, Second Coming, The Black Gift, YBG, Young Black and Gifted. Bookmark the permalink.