A Conversation with Blacastan & Stu Bangas 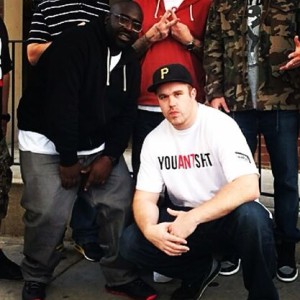 The formula of having one emcee and one producer on an album works best in Hip-Hop. Parading in cavalcades of producers on rap albums has soured the game. Rarely does the recipe work when there are too many chefs in the kitchen. Demigodz emcee Blacastan and producer Stu Bangas have resurrected the tried and true formula for their latest project, Watson & Holmes.

With the title of the album taken from the fictional characters Sherlock Holmes and his partner Dr. Watson, Blac and Stu created one of the grimiest releases of 2014. The album is produced entirely by MPC master Stu Bangas with guest appearances by Apathy, Block McCloud, Celph-Titled, Vinnie Paz, Planetary, and Esoteric.

The Real Hip-Hop spoke to Stu Bangas and Blacastan about the genesis of their collaboration, working side jobs while still being involved in Hip-Hop, and their new album, Watson & Holmes.

TRHH: Why’d you guys decide to get together and do an album?

Stu Bangas: We first met four or five years ago at a show in Boston. Some dudes that Blac was with and myself almost got in a scrap. No brawl broke out or anything like that. Afterwards we discussed it and talked about working together. Fast forward a year after that it was a record that a label wanted to do with myself, Reef, and Blacastan. We started bouncing beats back and forth but that album never materialized. Me and Blac decided to take the stuff that we had done and went ahead and put out a whole record. We liked the stuff that we had done, and the chemistry that we had, and the end result of the initial songs.

TRHH: How much of the record is new stuff?

Blacastan: Most of it is new stuff. We started with the core of it being a lot of the records that we salvaged from the previous project. That would have been 3 or 4 maybe. We had such a good flow going that coming up with records wasn’t even a problem, even to this day. Right now we’re working on an EP and the stuff that Stu produces I usually never have a problem with writing lyrics to it. I’d say four joints were from the original project. A lot of the stuff we re-worked. Some of it was halfway done and we finished or added to it. It’s not like we just had records that were sitting around that we just threw in.

Stu Bangas: The main one was the single ‘Nubian Metal’ that we dropped. It was the first one we ever did and it was dope. That was in 2012 and one other one. The rest is shit we did in the past 6-7 months.

TRHH: Who came up with the concept for the ‘Nubian Metal’ video?

Stu Bangas: I did that, man. We were trying to get a video done with Celph and Paz but we didn’t want to stress them. It’s hard to get everyone together. Blac was like, “Just throw it up on Youtube.” I tried to do something a little different with it so I was looking up old Blaxploitation films. I found this one video with all the trailers from the illest Blaxploitation films. It was like an hour long but I downloaded it and took the parts out that I liked and thought it fit with the song.

TRHH: How did the song ‘The Machine’ with Apathy come about?

Stu Bangas: That was a record I found off this person I buy from in China. It was an Asian record and it was just dope with the vocal sample and keys. It reminded me of that record that Alchemist did for C-N-N with Foxy Brown on it, ‘Bang Bang’, just because of the piano and the way the drums hit with it. I sent it to Blac and he said it was dope. He killed the first verse and we planned on getting Apathy on the record anyway so I said, “Why don’t we use this one?” Blac stayed on him because he was busy working on his record. I was bouncing at the time and Blac called me and said, “Yo this is crazy! Ap did his verse, we did it back and forth.” I wanted to hear the song but I couldn’t because I was busy bouncing at this club I work at. I got home and heard the song and it was crazy. These dudes went in.

TRHH: I didn’t know you were a bouncer, man.

TRHH: [Laughs] Well I could tell by looking at him, but I didn’t know he made money off of that.

TRHH: Stu, how was doing this album different from doing Machete Mode?

Stu Bangas: It’s really not that different, man. To work with Esoteric and Blacastan is really effortless. They like my beats. I’ve worked with other emcees who like my beats but they’re like, “Do this to it and change this,” or they take forever to write and get back to you. These dues hear the beat and go in. Both of them have good ideas to add on. It’s not just raps and beats. They know where they want drops to go, they know how to sequence the album, stuff like that. They see stuff that I don’t always necessarily see myself. They bring a lot to the record and it’s easy to work with them.

TRHH: Blac, the song ‘The Road’ gave pretty good insight into life on the road. Do you ever feel like giving up rap for a more normal consistent life?

Blacastan: Yeah, I mean I’ve dabbled. I’ve gone back and forth. I’ve worked at grocery stores in produce. I’ve worked in car lots as a lot attendant, I’ve worked in sales — I’ve done everything, man. Like Stu said, every now and then I have to revisit a day job because the money in rap just isn’t that consistent. I’ve been blessed to go out on tour and make thousands of dollars, and then you’re left high and dry. For 6-7 months you’re dead broke sleeping on your aunts couch or whatever – it’s crazy! ‘The Road’ is an accurate description. The first verse of the road I wrote while I was in St. Catharines, Canada on a tour with Block McCloud. We just had a terrible show. We dealt with a terrible promoter. All of those frustrations were so real. What we were talking about was actually happening in real time. The second verse I wrote six months later toward the completion of the album.

TRHH: I like the honesty in the record because I believe in rap there’s a lot of phoniness and flossing. What you described is the average rappers life.

Blacastan: Well I’d say the average independent rapper. This game has got so much smoke and mirrors it’s not even funny.

TRHH: Why do you think people don’t speak on that kind of stuff more often?

Stu Bangas: They’re embarrassed. I don’t know why anybody is embarrassed to admit that someone is working. You gotta respect someone that works. What I don’t respect is these lazy bums.

TRHH: That’s a ridiculous thing to be ashamed of.

Stu Bangas: Yeah, it goes against every core thing that should be instilled in people. People think it’s cool to not work – I don’t know.

Blacastan: It’s almost more acceptable to say, “I’m a gangster, I kill people for a living, and I rap.” That’s more acceptable than saying, “I punch the clock and I’m a blue collar dude.” You’re viewed as unsuccessful if you have to rap and subsidize your income with it. It means that you suck as a rapper. If you were dope you’d be making thousands off of this. You suck so you’re not making anything off of it. It’s not true. If you look at Hip-Hop right now, the wackest people are the people making the most dough off of it.

Stu Bangas: Even the independent dudes that are touring and selling a lot of music, they have people backing them. It’s not technically independent. They have a big push behind them, but people call it “independent”.

TRHH: What’s the meaning behind the Sherlock Holmes and Watson title?

Blacastan: Stu made a beat and he sent it through to me. The beat was so fresh that I just blacked out. It was probably one of the quickest songs that I wrote for the whole project. I wrote it almost instantaneously. In that song I have a line that’s like, “As we embark on a journey like Watson and Holmes/ Enter the hood, neighbors wanna lock up their homes,” and the light bulb came on. I don’t know where the hell that reference came from but it was crazy! I referred to us as Watson and Holmes. I thought maybe we should name the song Watson and Holmes and after that I was like, we should name the whole project Watson and Holmes. Sherlock Holmes and Watson were a duo together. They complimented each other real well and knew what each other was going to say. It’s the same thing with me and Stu. We’re doing business together, we’re making music together and at some points me and Stu are thinking the same things at the same time and it’s real crazy. That’s how ill the chemistry is. Nothing is better than Watson and Holmes – it just works. It sounds dope. Also there was a comic book that was out and we happened to come across it while we were in Philly.

TRHH: Who is Watson & Holmes for?

Stu Bangas: Blac was just on the AOTP album and that was a really good look for him in terms of broadening his fan base. We kind of tried to tailor some of the music toward that fan base. We both know what that sound is and what the fans of those artists like, but we also tried to take it to another fan base. You got certain indie rap fans that like the AOTP sound and some that don’t. We tried to step out a little but to get it to as many people that might enjoy it as possible. With the theme of the album we thought maybe we could interest people that are more into the stylized conceptual things – like with the art, and the sequence of the record is like a Sherlock Holmes movie.

Sherron Shabazz is a freelance writer with an intense passion for Hip-Hop culture. Sherron is your quintessential Hip-Hop snob, seeking to advance the future of the culture while fondly remembering its past.
View all posts by Sherron Shabazz →
This entry was posted in interview and tagged Blacastan, Blacastan & Stu Bangas, interview, Nubian Metal, Stu Bangas, The Machine, Watson & Holmes. Bookmark the permalink.