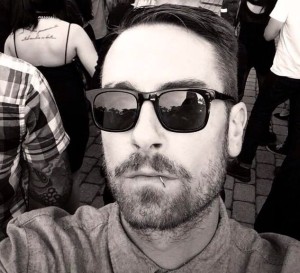 The final installment of this week’s look at Hip-Hop on the Warped tour features Sean Anonymous. Anonymous serves as one of the headliners on the Yo! Bring it Back stage at the 2014 festival. The Minnesota emcee’s introspective lyrics carry on the tradition of Minneapolis rappers that spit with substance.

The Real Hip-Hop talked to Sean Anonymous about his musical influences, upcoming projects, and performing on the Yo! Bring it Back stage at the 2014 Vans Warped tour.

Sean Anonymous: It’s just a good opportunity. Performing is one of my favorite things, if not my favorite thing to do in life. It’s a chance to get my music and my message out to different people in different cities every day and it’s a beautiful experience. I love it.

TRHH: Have the audiences been receptive to your music?

Sean Anonymous: Very receptive. Especially with the amount of younger kids that come out to Warped tour. They’re very open to new music. They are down for the call and response and down to get moving. It seems like they’re having a good time.

TRHH: Why is it important in your opinion to have the Yo! Bring it Back stage at an event like this?

Sean Anonymous: It’s so many reasons – countless reasons. Especially growing up with Hip-Hop like I did – I started listening like 15 years ago. It was a different vibe back then, people were freestyling, there were still people dancing. I think there are a lot of aspects of Hip-Hop that people are losing out on with mainstream Hip-Hop culture nowadays. I think this stage is a great representation of what it’s like, but it doesn’t feel antiquated by means. It still feels new, but it goes back and includes all the elements. We’re bringing that to these kids that may have never seen a break dancer before. The may have never seen a freestyle before. They may have never seen DJ’s scratching and cats painting out there. I feel like that’s one of the most important reasons. Also, it’s just really fun to do. It’s one of the most fun experiences I’ve ever had in my life.

TRHH: Are there any acts that you’ve seen on this tour that you’ve never heard of but are kind of diggin’ now?

Sean Anonymous: Yeah, definitely. Especially being next to the Beatport stage. There are a couple of cats on there like my bus mate DJ Nicola Bear and she’s been smashing it. She’s one of the better DJ’s I’ve seen in a long time. Also Bad Rabbits. I’ve heard of them before but I’d never seen them before. I saw them play at the barbecue a couple weeks ago. It’s kind of throwback soul but they kind of have some punk elements too. They are one of my favorite acts out here. I could go on and on. There is a huge list of great cats.

Sean Anonymous: Growing up the first time I remember listening to Hip-Hop was being 4-years old in the back of my mom’s car and she would flip it to the Hip-Hop station by accident and I heard it and I would get down. She probably wasn’t completely about it. I heard M.C. Hammer, but I’m all about syllables. The people that made me want to rhyme were Busta Rhymes, Talib Kweli, Eminem, and even before that Dr. Dre, Snoop Dogg, Ludacris, all those great people. I still listen to their music to this day and I still dig what they’re doing. I feel like Busta Rhymes is overlooked. I love Jay-Z and everybody but when people talk about the greatest emcees of all-time Busta has been doing it since the 80s and he’s still very relevant and killing it. He’s one my favs.

TRHH: I think it’s because his personality is so big that people forget that he’s actually spittin’.

Sean Anonymous: Oh yeah. A perfect example of that is the ‘Put Your Hands Where My Eyes Can See’ video. He’s walking around with the aboriginal face paint and there is like black light paint, he’s walking around with a cane and a top hot and there’s an elephant behind him walking to the beat. Man, I will never forget that video as long as I live. That was some of the shit that made me want to rap, write, and be an artists in general. Shout out to Busta Rhymes.

TRHH: How’d the collaboration ‘Weight’ with DJ Snuggles come about?

TRHH: I know a little bit.

Sean Anonymous: Snuggles is my homie. We’ve actually worked on a couple different things back in the day. I asked him to come up because he makes the sets that much better. I’ve been knowing him for a while. He was Brother Ali’s tour DJ, he won Scribble Jam for the beat boxing stuff. I started building with him and he would beat box on stage. At Soundset three years ago they were doing a compilation through Fifth Element, the Rhymesayers Hip-Hop shop in Minneapolis, and they wanted it to be a big collaboration type thing. They put me in touch with some of the cats from Audio Perm which is a producer collective in Minneapolis. I did this thing with Julian Fairbanks and there was a little open space on it and I was wondering what can happen with it. He didn’t even beat box on the track. It was a track called ‘Seats Taken’ and I had him doing vocal scratches. We just kept on building and he was working on his EP, That Beat, and he got a dope, dope beat from Big Cats back in Minneapolis and it was the type of beat where you just wanna write to it as soon as you hear it, which are my favorite types of beats. It’s easily one of my favorite tracks that I’ve been a part of – I love it. I’m glad that you know about that, man, that’s nice.

Sean Anonymous: I actually have an album coming out with my dude Dimitry Killstorm. It’s my first full-length. We haven’t announced the name of it yet but we’re hoping to put it out either in the fall or next spring. It is my best album I’ve ever made. It’s also the realest album I’ve ever made. It took me about a year and a half or two years to make. I went through a lot of stuff while making this album, a lot of hardships, a lot of rough times. I lost my mom in that time and there is a lot of songs dealing with that. It’s definitely the most personal album that I’ve ever made. I know when it comes out that there will be people out there that can relate to what I went through and I just hope listening to this album can help them get through it, because it helped me get through it just writing my feelings while going through that stuff. It’s going to be good. I got Wordsworth from Lyricist Lounge, Aceyalone, P.O.S. from Doomtree, my old roommate Lizzo who is blowing up. She just got signed to Virgin over in Europe. She’s Rolling Stone’s top 10 artist to watch – she’s killing it. It’ going to be a good time. You should check it out.

See Sean Anonymous on the Yo! Bring it Back stage at the 2014 Vans Warped tour:

Sherron Shabazz is a freelance writer with an intense passion for Hip-Hop culture. Sherron is your quintessential Hip-Hop snob, seeking to advance the future of the culture while fondly remembering its past.
View all posts by Sherron Shabazz →
This entry was posted in interview and tagged interview, Sean Anonymous, Vans Warped Tour, Weight, Yo! Bring it Back. Bookmark the permalink.