A Conversation with Talib Kweli 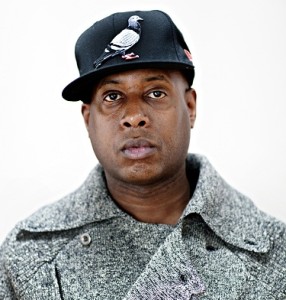 When you think of Talib Kweli you probably think “conscious rapper”. Throughout his long career in rap the BK MC has showcased his skills as a battle rapper in addition to making party records, love songs, and yes, even rapping about serious subjects. Kweli’s propensity to rhyme about social issues has managed to put him in a box where he’s viewed solely as a conscious rapper.

Kweli’s latest release, Prisoner of Conscious destroys the idea that Kweli is “just a conscious rapper” while poking fun at those who’ve tagged him with the “conscious” label. The album is sonically and lyrically adventurous and features an all-star cast of producers, singers, and emcees that includes Busta Rhymes, Miguel, J Cole, Nelly, S1, Melanie Fiona, RZA, Kendrick Lamar, Oh No, Marsha Ambrosius, Terrace Martin, and Curren$y among others.

Talib Kweli spoke to The Real Hip-Hop about his record label, Javotti Media, performing as part of the 2013 Rock the Bells festival, the possibility of a new Black Star album, and his new solo album, Prisoner of Conscious.

TRHH: Why’d you title the new album Prisoner of Conscious?

Talib Kweli: Prisoner of Conscious is like a reference to people’s perception of me as an artist.

TRHH: Why do you think there is that perception of you? In my opinion you’re well-rounded and touch on a lot of different things, so why is the conscious label given to you?

Talib Kweli: I agree with that. I think it’s because of how I’ve been marketed and sold. I think the industry needs to puts things in a package or a box and it’s easier to sell. Whenever I’m talked about in the media or through a label it’s like, “conscious rapper”, “underground rapper”, “positive rapper”, as opposed to letting it be what it is.

TRHH: On the song ‘Upper Echelon’ you say, “Rap been laughable over the last year or two,” can you explain that lyric?

Talib Kweli: I think rap has always been laughable. Truth be told, I’m far more of an optimist when it comes to Hip-Hop than that lyric would suggest. That’s me being competitive and taunting the competition by calling it laughable. Really, I enjoy a lot of Hip-Hop music. Is there a lot of laughable rap? Sure, I just try not to pay attention to it.

TRHH: What led to the dismantling of Blacksmith Records and the birth of Javotti Media?

Talib Kweli: Blacksmith Music was a company I started with my manager at the time, Corey Smyth. To be frank, a lot of it was based around my vision. Me as an artist I had to make sure I had product out there. When I found it to be me doing the majority of the work I decided that it would be better for me to have my own label.

TRHH: With the current state of the music business, is it imperative for an up-and-coming act to bypass majors and do their own thing? Do you think it’s a better move?

Talib Kweli: Yeah, I definitely think it’s a better move. At this point it’s your only move. The labels at this point don’t take chances. They don’t gamble on anything. The only thing they invest money in is things that are already making money and things that already have their own movement.

TRHH: ‘High Life’ is my favorite song on the album. It has such a good feel to it. Talk about ‘High Life’ and how that song came together.

Talib Kweli: That’s good, thank you. I definitely wanted songs on this album to transcend the boundaries of Hip-Hop. I was conscious of that when I was picking the tracks. Oh No produced ‘High Life’ and most of the songs on the album. ‘High Life’ was something that left the world of Hip-Hop immediately as soon as the first horn comes in. I feel like if you love Hip-Hop you can still appreciate it, so really it was a perfect track. I didn’t know what I was gonna do with it. My man Rubix who I grew up with, happened to be in the studio with me in San Francisco, he raps but he hasn’t been pursuing it as a career. I was like, “Yo, let’s go back and forth on this track,” and when I did that it wasn’t my intention to put that song on the album. But it came out so good to me that I was like, yo, that needs to go on the album.

TRHH: I notice on Twitter you’re really involved with fans. If their comments are negative or positive you still interact with people. What are the pros and cons of fans having access to artists on social media outlets?

Talib Kweli: The pros are that they can get the information directly from the person’s mouth and they can have direct interaction. I can’t imagine if I could have had a direct conversation with Chuck D or Q-Tip when I was growing up, that would have blew my mind. Certainly I get a lot out of it. I get to see where they’re at; I get to hear people’s opinion in real time to help me navigate my career—a lot of pros. The cons are based on your participation. You can have an experience that’s all pro if you want. The cons are only when as an artist you let your ego get involved. Sometimes you find yourself paying more attention to the negative than the positive even when the positive is overwhelming.

TRHH: I thought ‘Push Thru’ was a special record with three different perspectives. How did you, Curren$y, and Kendrick come together to create that song?

Talib Kweli: Originally the record was me and Curren$y. We did it together in the studio. I didn’t know what I was going to use it for. It was just a record we had. When I was sitting with Kendrick talking about jumping on the album I was playing some beats and he picked that one. I said, “You know me and Curren$y jumped on that beat,” and he was like, “Let me hear it.” I played it for him and he wanted to jump on it too.

TRHH: You’ve worked with some of the greatest producers in rap history like Hi-Tek, Kanye, Dilla, Madlib, Just Blaze, Neptunes, and Pete Rock. What did it mean to you to work with RZA on ‘Rocket Ships’?

Talib Kweli: Ha! RZA is the truth, man. RZA definitely belongs up there with all them cats you named. It’s a dream come true to work with him. RZA is somebody I consider a friend. I’ve known him as a friend for a while but we never worked on a record that’s been for me. I’ve done things for him on soundtracks and stuff but this was special.

TRHH: I think the next logical step is to hear Kweli on a DJ Premier track.

Talib Kweli: I agree, because that hasn’t happened yet.

Talib Kweli: Just me and the band rocking out.

TRHH: I know you get the Black Star question a lot but I wanted to ask you, did doing Rock the Bells together two years ago inspire you guys to make a follow-up to the Black Star album?

Talib Kweli: Um, we talked about it but we haven’t actually sat down and done it.

TRHH: Is there no interest in it?

TRHH: In the beginning of the interview you said Prisoner of Conscious is a label that’s been put on you, do you actually feel like a prisoner of conscious?

Talib Kweli: Not at all.

Sherron Shabazz is a freelance writer with an intense passion for Hip-Hop culture. Sherron is your quintessential Hip-Hop snob, seeking to advance the future of the culture while fondly remembering its past.
View all posts by Sherron Shabazz →
This entry was posted in interview and tagged Black Star, High Life, interview, Javotti Media, Prisoner of Conscious, Push Thru, Reflection Eternal, Rock the Bells, Talib Kweli. Bookmark the permalink.