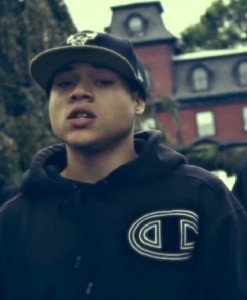 New London, Connecticut is not known nationally as a fertile breeding ground for emcees, but that could all change with the success of 22-year old rapper, Hayze. Discovered by Demigodz co-founder Apathy, Hayze has a unique voice and delivery that piqued Ap’s interest. Apathy subsequently signed Hayze and landed him a deal with Man Bites Dog Records.

Hayze spoke to The Real Hip-Hop about being discovered by Apathy, why he believes marijuana should be legalized, and his new mixtape, The Smoker’s Section.

TRHH: Tell me about the new mixtape, The Smoker’s Section.

Hayze: The Smoker’s Section is basically dope. Altogether it’s something new. You can put that on and do anything to it—a real cool vibe to it.

TRHH: What’s the meaning behind the song ‘Creep Mode‘?

Hayze: It’s just basically what I go through every day. You gotta get into a mode before you start strolling and shit and getting out there and making moves. You gotta be in the right mind state, watching out for the right shit, and making sure people don’t do no funny shit to get you. Be aware, basically.

TRHH: How’d you hook up with Apathy?

Hayze: It’s actually crazy how I hooked up with Ap. I was in the stu recording a track for it and we had finished mixing one down. I needed a blank CD and he got a studio right down the hall from where I was recording at. I went in there and asked him for a CD, he came in and listened to some tracks. He called me the next day and was like, “I’m trying to sign you, man.”

TRHH: So how’d you hook up with Man Bites Dog, was that through Apathy?

TRHH: You felt like that was the right move for you?

Hayze: Yeah, definitely. The way I felt about the situation was everything was lining up crazy. I wasn’t even worried about music honestly. I was hustling before all of that. My grandma had died and it had me fucked up. I was like fuck it, I’m gonna give music one more shot. My manager took me to the studio and I met Apathy and the next day he said he wanted to sign me. I wasn’t even doing nothing. I didn’t even put out a mixtape. I dropped one mixtape a year and a half before The Smoking Section and it ain’t really do nothing—it was more or less some local shit. All this shit just happened off me going to a studio and recording, I was like, I gotta run with it.

TRHH: Who are some of your musical influences?

TRHH: Ap was saying that he liked your style because it was different. How’d you develop the laid back style?

Hayze: With my voice really. I don’t like screaming on microphones. When I first started recording I was recording myself in the crib and it was usually on the late night so I couldn’t even be turnin’ up. I couldn’t scream on the mic, fuck around and wake everybody in the crib up. So I had to record low but that shit wasn’t sounding right. I could never mix my voice right until I got in a real studio. I could record smooth, it was basically like talking. It sounded right on the track and locked itself in.

TRHH: Your music is pro-marijuana. Are you for legalizing marijuana?

Hayze: All the way.

TRHH: What do you say to critics who say legalizing the drug would only lead to more incidents of cancer and vehicle deaths?

Hayze: McDonald’s is legal, cigarettes are legal, there’s all kinds of shit they put in our food that fucks our body up and leads to cancer. The cancer rates now are crazy. You’re almost guaranteed to get that shit now. It can’t be off everyone that’s smoking weed or second hand smoke. It’s obviously other factors going into that. Alcohol is legal. I don’t really understand why people hate on weed really. You can’t hate on weed, it’s not really a drug.

TRHH: OK. Tell me about the song ‘Life is Hell’.

Hayze: Me and Ap came up with that in the studio just vibing together. It had a soulful little cut to it because the hook is real turned up. You get a nice vibe to it but when the verses drop it smooths itself out so crazy.

TRHH: What do you hope to achieve in the music business?

Hayze: I’m trying to basically never have to work a 9-to-5. I’m basically trying to take it as far as I can and feed as many of my people as I can.

TRHH: What’s next up for Hayze?

Hayze: We got the album coming out. I just been in the studio a lot lately working on a lot of music. We might even give ‘em a Smoker’s Section part 2, I don’t know. We’re looking to do some shows. We got a lot in the works.

Sherron Shabazz is a freelance writer with an intense passion for Hip-Hop culture. Sherron is your quintessential Hip-Hop snob, seeking to advance the future of the culture while fondly remembering its past.
View all posts by Sherron Shabazz →
This entry was posted in interview and tagged Apathy, Creep Mode, download, free, Hayze, interview, Life is Hell, Man Bites Dog Records, mixtape, The Smoker’s Section. Bookmark the permalink.