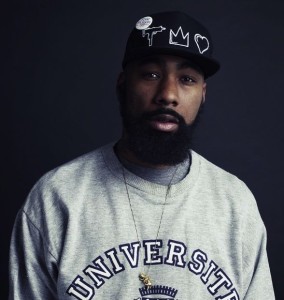 F.Stokes’ journey in life began on Chicago’s volatile South Side. Being born and bred in the Windy City shaped Stokes’ life and later on his writing. A city known for geniality, guns, and gangs usually produces multifaceted citizens; F.Stokes is no different.

Hope for a better life led a young Stokes and his family to Madison, Wisconsin where he matured and honed his storytelling. Stokes later moved to Brooklyn, New York, a place that birthed some of the game’s greatest emcees such as Jay-Z, Big Daddy Kane, GZA, Mos Def, MC Lyte, and the late Notorious B.I.G.

A taste of Hip-Hop’s origins blended with Chicago’s raw soul is what makes up F.Stokes’ current sound. Common, Kanye, Twista, and Lupe all wear their flaws like a badge of honor while never forgetting where they came from–Chicago; F.Stokes is no different.

After dropping a handful of projects and years of performing across the globe, F.Stokes connected with another Midwest artist, Paper Tiger of Doomtree to create a 10-track album titled Fearless Beauty. The album chronicles Stokes’ family migration from Arkansas to Chicago in the mid-1950’s along with the trials and tribulations they endured in the aftermath.

F.Stokes spoke to the Real Hip-Hop about working with Doomtree’s Paper Tiger, the positive aspect of Chicago’s Drill scene, and his new album dropping on June 17, Fearless Beauty.

TRHH: Explain the title of your new album, Fearless Beauty.

F.Stokes: Basically when I was approaching the concept of Fearless Beauty it was as a “do what you want to do” mentality, regardless of the social consequences. Regardless of people judging you or what have you, do exactly what you want to do and be fearless. And in that I see the beauty. Kanye is on that right now with what he’s doing with a rebel-like mentality. That translates in all facets, whether you’re a businessman or an artist. I think we as people should be doing exactly what we want to do, if not we’re doing an injustice to ourselves, and ultimately the world. I’m here to be to be a musician and a rapper. I’m not here to be a construction worker, a bus driver, or a boxer.

This is my platform to touch the world. Your platform might be as a journalist and this is exactly what you should be doing. You probably had people who were probably like, “Go to school and get a degree in this or that,” because you can’t get rich doing this necessarily. As an artist very few of us become millionaires. I did this based off this being already written. This is my destiny and I had to be fearless in that approach because being fearless provided with me a shield from the hatred. The hatred being people saying, “You should do this to pay your bills,” or “You shouldn’t be on the road for seven months out of the year because your girl needs you,” and all that shit to me is subliminal hatred and it’s so indirect, but it takes us off course for what we’re here to do.

TRHH: I had a conversation recently with someone and told them that two of my biggest inspirations in life are Minister Farrakhan and Mike Tyson. The guy laughed at me and said, “There probably aren’t two more disliked people in America.” Part of the reason I admire those two people is because they are fearless.

F.Stokes: Let’s keep it real, dog, the shit he says he has to say because it’s in him to get that word to the people. There is no other choice. He’s willing to risk his life for that. That’s one of the many concepts behind Fearless Beauty.

TRHH: I can’t imagine ever being that free. It seems liberating.

F.Stokes: It’s so liberating. The stuff I say I can die for but at this point I don’t care. I give my soul to this. I sacrifice my life to get this message out. It doesn’t matter to me. I’m an instrument. If someone wants to off me because of the words I speak, I’m more than ready for that moment.

TRHH: How is Fearless Beauty different from ‘Love Always’?

F.Stokes: Love Always was musically a bit more live instrumentational so to speak. Love Always was done by a group called the Club House. In terms of the actual music behind the words there’s an indie rock appeal behind Love Always. Fearless Beauty is more of a hard Hip-Hop album. I looked at it like an 80’s album in terms of the hardness and the way it sounds.

TRHH: How’d you wind up working with Paper Tiger?

F.Stokes: I’ve always had a tight relationship with Doomtree. Those have been my homies for years. Once Paper moved to Brooklyn we became tighter based off sheer geography and him being closer to me in New York City. He sent me some beats a while ago and I told him when I was done touring I would sit down and really go through them. We just kind of found that zone, man. Paper is one of the more talented people I’ve ever worked with in my life. I told him, “Yo, Paper your shit belongs in the back of a Chevy in 1986 going down Lake Shore Drive,” that shit rattles!

TRHH: Talk a little about the song ‘Shaka Zulu’.

F.Stokes: ‘Shaka Zulu’ is a tribal song. Even the video is based on the South Side of Chicago in the house I grew up in. It’s a call to all my soldiers. I would read and get phone calls about these babies killing each other on the South Side of Chicago. To me it’s not that much different than how Shaka Zulu has this warrior mentality. Part of that was the influence for the song but it also reminded us that we’re all Shaka Zulu in a sense. If you’re a businessman and you put that suit and tie on that’s your mask. If you put that ski mask on to go and rob that store to feed your babies it’s the same concept. That to me is global. Musically I had to have those drums sounding as tribal as possible because I had to speak to those kids on the South Side of Chicago and let them know they weren’t alone. To me that was important. I didn’t make it to get radio play. I don’t make none of my shit to get radio play. I don’t give a fuck about that. At this point I’m making music for the streets. This is the soundtrack, no filtering, and Shaka Zulu is an example of that.

TRHH: Why do you think Chicago emcees tend to have conscious themes in their rhymes?

F.Stokes: Good question, wow, a really good question. We all kind of do, there is a thread of positivity. I think a small part of that is based on the fact that the Nation of Islam headquarters is one the South Side of Chicago. I think to have the temple there and as somewhat of a backdrop of whatever you do, there is always this thread of consciousness going through it. People can say what they want about Chicago but it’s still this very strong Afrocentric place. Even the gangs initially were organized brothers taking care of the neighborhood. We’re taught at a very young age to take care of ourselves and feed those around us. I’d say that’s probably why there is somewhat of a constant hint in most of our music because of the makeup of the neighborhoods. I could be wrong but that’s how I see it.

TRHH: What’s your take on the Drill scene coming out of Chicago?

F.Stokes: I love it. I love it. My little cousins, that’s their homies. I love the fact that these kids were able to draw so much interest on the internet that it caused these labels to cut a check. On just sheer survival I think it’s brilliant. I think it’s wonderful that Chief Keef, a 16-year old kid from the South Side of Chicago has a voice that’s loud enough to be amplified and burn through any corporate filtering and went directly to the people with it. To the point where the labels came to him and wrote him a big check. That’s dope. That’s ill, everyday. It shows you how powerful the youth is.

In terms of the message, that’s a whole ‘nother story. I wish the message was a bit more positive. I wish these kids were a bit more sensitive in their delivery but the fact of the matter is Chief Keef, Lil’ Durk, Lil’ Reese, these guys generated interest on the internet to become famous enough to get paid off their craft. That’s exceptional. That don’t happen every day. So, much love to them—keep going. I was in Paris and one of the songs I played in my set is Chief Keef’s ‘Don’t Like’. They’re on it. They get it. That shit is chant music. That’s tribal music. That music is in a way unifying even though the message is something else, but the energy behind it is the foundation for unity. I think once Chief Keef gets it together honestly he’s going to recognize his effect. It’s tough for Keef but I would hope he recognizes the power of his music and ultimately shifts toward something that’s slightly more positive, like most of us do. Ice Cube came out hard as fuck! And then he was like, “Whoa,” because I think he realized that he was affecting kids not just in Compton, but also in Japan. Chief Keef is still a baby and new to it and once he’s able to grow he’ll realize that.

TRHH: What do you hope to achieve with Fearless Beauty?

F.Stokes: Just to continue to push the brand, influence, and inspire. With this music shit I’m a simple dude. I don’t really care what people say about me, positive or negative. At this point it’s my only job in life to influence and inspire people. That’s it. I’ve fucked enough bitches, I’ve made enough bread, I been through all that shit. All that dope boy shit they talk about I’ve been there and done that. My homies locked up behind it and my daddy is locked up behind it. All I’m left with is my ability to touch souls and I hold that very dear.

Sherron Shabazz is a freelance writer with an intense passion for Hip-Hop culture. Sherron is your quintessential Hip-Hop snob, seeking to advance the future of the culture while fondly remembering its past.
View all posts by Sherron Shabazz →
This entry was posted in interview and tagged F.Stokes, Fearless Beauty, interview, Paper Tiger, Shaka Zulu. Bookmark the permalink.