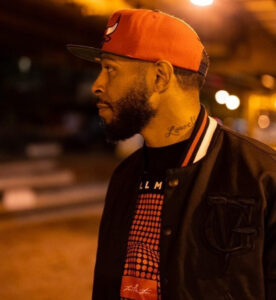 The Real Hip-Hop spoke to Aaqil Ali about the origins of his name, his transition from playing football to rapping, and his EP, Dirty Spirits.

TRHH: What’s the meaning behind the title of the EP, Dirty Spirits?

Aaqil Ali: It’s basically about the duality – our higher self and our lower self – just kind of articulating that sometimes you’ve got to kind of be a little dirty in this life. You ever hear the quote that “you can’t send a saint to kill a sinner?” It’s almost a duality that we have to be two ways, from my perception, just to kind of survive.

TRHH: How would you compare this project to your first release, Visions of a Lost King?

Aaqil Ali: I felt a little bit more polished. I felt like I was able to articulate what I wanted to get across a little bit better. I felt like it was growth — a step up – just trying to become a sharper artist. I believe it was a level up from my perspective and what I’ve been hearing.

TRHH: My favorite joint on the album is “Utopia” with Planet Asia. How did that collab come together?

Aaqil Ali: After I was working on the album, as I got to the middle of the album G4Jag was like, “Yo, I’m going to get you a feature. I have to get you with Planet Asia.” He has a real close, personal relationship with him. He told Yosonova to make a beat similar to something that Planet Asia would rock with. I just laid my verse and when Planet Asia heard it he just loved it and just went in. We recorded it and recorded the video the same day I met him.

TRHH: Why did you decide to enter Hip-Hop after playing football?

Aaqil Ali: Football was long gone. The thing was, I’ve always done music. Even when I was in college I was trying to find my way. Once football was finally over and I knew I was never going to pursue a professional career anymore, music just ran right into it. But I waited kind of late because I started doing music like three years ago. I waited until I was in my thirties to even try to pursue Hip-Hop.

TRHH: That’s interesting because the perception among many is that it’s a young man’s game. Not that you’re old, but in Hip-Hop you might be considered old. Did you have any apprehension about being “the old guy” rapping?

Aaqil Ali: Nah, because I look young. That’s what made me not want to rap because like you said, it’s a young man’s game. But I knew in the independent world that I was going to be able to make music the way I wanted anyway and get an audience. I wasn’t really so worried about the perception of others. I knew that there was a lane for a mature 35-year old who makes mature music. I see other guys like Mick Jenkins, and a lot of artists that I follow who are around my age or older who are making great music. You may not get everybody, but you’ll find a lane for yourself.

TRHH: You drop a lot of jewels on the song “Reflection” and in one line you say you were mad at sports. Why were you mad at sports?

Aaqil Ali: At that time, I was at the University of Pittsburgh and I was on child support. Football wasn’t going the way I wanted it. I was the number one safety in the nation, I could have went anywhere I wanted, and I chose to go to the University of Pittsburgh. I got dicked around a little bit – a lot of politics. So, I said, “I was mad at sports, they laughed in court/When I was with heathens riding for child support/Black man engulfed in the system, living above the law.” I was frustrated from sports and from what was happening to me in football. I felt like the hustle. I was hustling in college. The way things were happening it didn’t seem like things were going to pan out my way. I was getting dicked around a bit. I was articulating that I was frustrated with sports and the fact that I was on child support at 19.

Aaqil Ali: Aaqil Ali is a Moorish name. What we do is we study Islam, but Aaqil Ali came from my grandfather. Aaqil means “most kind” and Ali means “intelligent.” So, in the Moorish nationality we have titles, not names. You know how Christians and all types of religious people have names, but in the Moorish American nationality we have titles that have meanings that come from universal laws and nature. So, I just switched after a while.

TRHH: How involved are you in the Moorish Science Temple?

Aaqil Ali: Not as involved as I should be, but it’s because I don’t trust people. Moorish is a bloodline, but there are still bad Moors. I take the universal knowledge that I learned and I’m very self-sufficient, unless I’m around good elders. I’m very careful in going into the Moorish Temple because a lot of these guys don’t really teach the proper knowledge. They use it for more narcissistic use, and I’m really about getting the knowledge that I need and treating people the way they’re supposed to be treated. So, I don’t really deal with the Moorish Temple as much as I used to.

TRHH: On the song “Focus” you say, “Once we learn our history, we’ll be walking with that Jewish pride.” Explain what you mean by that line.

Aaqil Ali: Hasidic Jews, especially in Brooklyn, Williamsburg, they sway the votes. They work together and they walk around and let you know who they are. They’re very proud of who they are and they stick together and get things done. I just wanted to throw that little jewel in there. It’s me articulating that a lot of Jewish people have a lot of pride in what they do. I threw that little thing in there and you caught it, too. That’s dope, man.

TRHH: I did catch that. Who is the Dirty Spirits EP made for?

Aaqil Ali: It was really a challenge from G4Jag and Flee Lord and them to see if I could hold my own. They linked me with a young producer named Yosonova. He didn’t have a crazy name, I didn’t have a crazy name, we linked up and that was my introduction to the Hip-Hop lane. That was from the people who wanted to see if I could hold my own and if I was ready for this lane. If you listen to Visions of a Lost King I was spitting very conscious. I was staying in one realm and I didn’t open up my playlist as an artist. Dirty Spirits is just me showing the versatility and showing people that I could rap any way – gritty, conscious, melodic, whatever way it was I just wanted to show the versatility.

Sherron Shabazz is a freelance writer with an intense passion for Hip-Hop culture. Sherron is your quintessential Hip-Hop snob, seeking to advance the future of the culture while fondly remembering its past.
View all posts by Sherron Shabazz →
This entry was posted in interview and tagged Aaqil Ali, Dirty Spirits, Dough Networkz presents Dirty Spirits, EP, Fly Family, Focus, interview, Mount Vernon, New York, Reflection, Utopia, Visions of a Lost King. Bookmark the permalink.