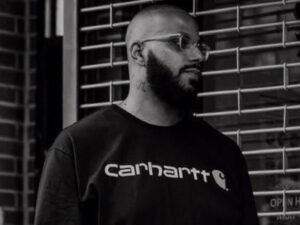 Producer Reallyhiiim and videographer Puzzle joined forces for an album called, “The Crux.” The Crux is a collection of 11 songs featuring an array of emcees telling their tales over Reallyhiiim’s somber, sampled soundscapes.

The Real Hip-Hop spoke to Reallyhiiim about making music that could cross over into the mainstream, his working relationship with Puzzle, and their new album, The Crux.

TRHH: What’s the meaning behind the title of the album, The Crux?

TRHH: What was Puzzle’s role in the album?

Reallyhiiim: Puzzle, we really collaborated fifty percent on everything – the title, the whole aesthetic, every visual, and EVEN the production. It’s really produced by me, but every beat runs through him in a way. His role is the executive producer, but we really just went 50/50 with everything.

TRHH: “Hezekia Flow” features Willie the Kid; how did that collab come together?

Reallyhiiim: To make a long story short, we wanted to get Willie on the project in general. It sort of stems from Puzzle’s prior relationship. He’s one-half of The Diggers. They direct videos, and they did a couple of visuals for Willie before. So, it really spun off of that relationship. Willie definitely held it down and blessed us for the project. We just wanted to get the dopest rappers on it. Willie’s name was a no-brainer for us.

TRHH: “Roots of Nazareth” is my favorite joint on the album. Take me into the creation of that song; is the singing and the saxophone from two different records?

Reallyhiiim: No, it’s actually the same sample. As soon as I heard that sample it was one of those feelings like, “This is the one.” It’s definitely two different parts of the same sample. It’s pretty much digging, finding that sample, looping it up, and chopping it up. For me as a producer, I don’t wanna hear anybody but a Planet Asia or that type of caliber of an emcee on there. I think it was a perfect marriage. The production came first, and then figuring out Planet Asia was the final piece to that track.

TRHH: “Dead Critics” is a song without drums. What’s the process like for you when you decide if a track needs drums or not?

Reallyhiiim: Speaking for that particular joint, it’s really the artist. Divino and Estee, both of their flows are just so powerful that sonically it sounds good without drums. For that track, producing it, I definitely tried to go with a drum-less beat. It’s not something that I normally do, but it definitely depends on the artist. Not every artist can hold down a track without drums.

Reallyhiiim: All I have is FL Studio and a laptop, honestly.

TRHH: Who spit your favorite verse on The Crux?

Reallyhiiim: Oh man. I think my favorite verse would be Estee Nack’s verse, ‘cause he just went crazy.

TRHH: Who is The Crux album made for?

Reallyhiiim: I wanna say it caters to fans of the underground lane. People that really support and fuck with those names on the underground scene. But we also wanted to slightly transition into a more broad era. So, I feel people that may not be totally tapped into the underground, it’s upbeat and lively enough to cross over into a more mainstream demographic.

Sherron Shabazz is a freelance writer with an intense passion for Hip-Hop culture. Sherron is your quintessential Hip-Hop snob, seeking to advance the future of the culture while fondly remembering its past.
View all posts by Sherron Shabazz →
This entry was posted in interview and tagged Atlanta, Dead Critics, Georgia, Hezekia Flow, interview, New York, Puzzle, Reallyhiiim, Reallyhiiim & Puzzle, Roots of Nazareth, Syracuse, The Crux, The Diggers. Bookmark the permalink.