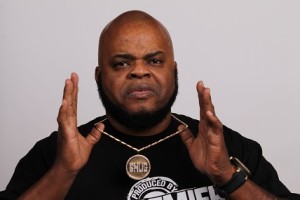 Gang Starr Foundation’s Big Shug is back with his fifth album titled, “Triple OGzus”. The Boston native concocted an album that blends boom bap with soul. “Triple OGzus represents me as a street veteran, underground icon and original gangster who is always wise to the game,” Shug explained. “I love the fans and will always represent authentic Hip-Hop music with my soul.”

Big Shug spoke to The Real Hip-Hop about his new album, Triple OGzus, his transition to the big screen, and his relationship with the late, great Guru of Gang Starr.

TRHH: How’d you come up with the title ‘Triple OGzus‘?

Big Shug: Number one is me being an OG – original gangster. I’m just a veteran cat and with everything that I’ve embodied over my life I know I’m an OG but I’m also above that. That’s why it’s “OGzus” because it’s above that. I got so much wisdom and so much to offer so I put it musically on this album. That’s where that name came from.

TRHH: The song ‘I Bleed For This’ is unique in that it doesn’t sound like your typical DJ Premier track and also because you’re singing on the hook. How long have you been singing?

Big Shug: I’ve been singing since I was like 9 or 10. Me and Guru started Gang Starr together. Originally when we first started out in our performances we would sing and we would rap, so it was a little ahead of its time. I was always a strong singer so we would have a pretty good show. I’ve sang like most of my life.

TRHH: Do you write rhymes as they come to you or do you write to the beat?

Big Shug: I basically write rhymes when they come. It’s both situations. If someone is contracting me to do a 16 or somethin’ they gotta give you the music and you gotta write to it. Sometimes I have things in my head and I just put it together and write it out to go along with whatever beat. It’s actually both ways ‘cause I’m always writing even when I don’t have music. At the same time a lot of times you get the music and then you write.

TRHH: Do you ever have trouble matching up rhymes you wrote with certain beats?

Big Shug: Nah, that doesn’t make sense to me [laughs]. I’m not going to hear music and rhyme to it just for the sake of doing it. I’m gonna make it work. To me that’s a true emcee. I can rhyme rapid style and all kinds of stuff if I wanted to but that’s just not me. If someone gives me a beat I can write to anything that I get. It’s never no problem with that, bro.

TRHH: I spoke to Fong-Sai-U last year and he told me that near the end Guru secluded himself from people. What’s your take on the whole Solar situation and the state of mind Guru was in near the end of his life?

Big Shug: We have no idea what state of mind he was in because we didn’t see him for 9 years of his life. For 9 years he was with Solar doing whatever. When I speak of that I speak of me and Premier because we’re still involved in our music and what we do. The original Gang Starr Foundation is really Guru, Preem, and Shug because when Jeru and Group Home left it was still us doing stuff. That’s my man from the beginning but we have no idea what was going on with him. He chose to roll with Solar. I can’t even speculate on what was going on because we weren’t privy to no type of information. He just stayed away. It was sad because we didn’t want him to go out like that. Any time we would go to spots that they were supposed to be they wouldn’t be there. With the way they were, staying away from us, I really don’t know what his state of mind was.

TRHH: Can you share a never before told Guru story?

Big Shug: What people don’t really know is me and Guru were friends from the beginning. Before this rap thing came to light we were friends. In the earlier days of Hip-Hop we would go on any corner in Boston or buses and just start singing and rapping. It used to be fun because it was so plain and it was the beginning and we were super-popular to the local people in our area. Just being a friend with him was great. There’s no special story because me and him did a lot. We went to Atlanta years ago to try to make it out there. We were going to meet up with Larry Blackmon and some other people trying to jump off our career. This was many years before he started with Premier. There are no special stories like I said, it’s just me and him was boys. We did a lot together.

TRHH: Tell me about the single ‘Off Rip’.

Big Shug: Off Rip is basically what it is. We’re just lettin’ you know from the gate that this is how it goes down. It’s kind of like a cypher joint where we’re all just going in. In the video we’re just on the corner outside. It’s nothing elaborate, just raw spitting. It’s me touching on a few things. Everybody knows about our legacy with Gang Starr, Guru and everything. I’m just giving them that grimy Hip-Hop.

TRHH: I saw you recently in the Larry David movie ‘Clear History’. How’d you get into acting?

Big Shug: The first movie I was in was ‘The Town’ with Ben Affleck. I was in the extended version and the collector’s edition because it got cut from the main movie. It actually took off because a lot of people were seeing me when they would order the movie, therefore I started getting recognition. After that I was called to read for ‘The Heat’ with Sandra Bullock and Melissa McCarthy – I’m also in that movie. After that I was in the Larry David movie. CP Casting keeps calling me and putting me in these situations and I have to ace it. I also just finished filming this movie called Black Mass with Johnny Depp. That’s about a South Boston gangster, Whitey Bulger, who was once on the most wanted list. They just started calling me and I’ve always had that ability so I guess it came to fruition.

Big Shug: Triple OGzus is for authentic Hip-Hop fans. There is something for the youth because the music is educational the way we do it. I have a young son in high school and you won’t find nobody in his school and his AAU basketball sector that aren’t fans or know about his father’s music. It’s for the OG’s as well, it’s for some Gang Starr fans. The reason why I say it’s for “some” is because when I started making Big Shug records Gang Starr wasn’t together. Therefore I caught on to some fans that know me just as Big Shug. It’s really for a lot of people. It’s for grown Hip-Hop because I do a lot of singing on the album. There are actually 4 songs on the album that aren’t rap songs. There is a remake of “In the Rain” by Oran “Juice” Jones, “Relationships” is an interlude, “Days Go By”, and I have a strip club song called ‘Make That Body Do’ which I sing on a bit but I’m really talking about a night out at the strip club. I’m singing on a few hooks too.

It’s for women, men, older fans – a lot of people, it’s just not targeting the genre. That’s why I call it Hip-Hop and Soul music. You’re going to hear some raw Hip-Hop and you’re also going to hear some Soul music as well as far as crooning and getting deep. It’s a couple of ill joints on there where I’m just going in as an emcee getting at it. I feel the album is for different parts of everyone. I just completed another album that’s in the works for a deal that’s a total Soul album called “The Living Room”. It’s only singing, it’s maybe rapping on one song. People who have followed Gang Starr know that I always sang, even on Jazzmatazz. I try to give you entertainment with these albums. It’s not just going to be me rapping with dudes and a bunch of features. I know a lot of brothers in Hip-Hop that I could call and they’ll jump on a verse in a minute but that’s really not what it’s about. It’s about me trying to be authentic with it and giving that brand of Hip-Hop for different people, you know?

Sherron Shabazz is a freelance writer with an intense passion for Hip-Hop culture. Sherron is your quintessential Hip-Hop snob, seeking to advance the future of the culture while fondly remembering its past.
View all posts by Sherron Shabazz →
This entry was posted in interview and tagged Big Shug, Boston, DJ Premier, Gang Starr, Gang Starr Foundation, Guru, I Bleed For This, interview, Off Rip, The Living Room, Triple OGzus. Bookmark the permalink.