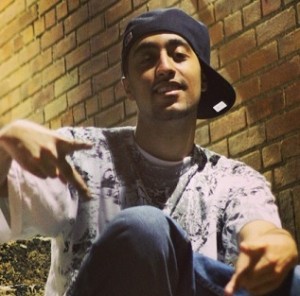 Based in the birthplace of Hip-Hop, the Bronx, rapper G.C. has a simple request, don’t sleep on him. Confident in his abilities and eager to make a name for himself G.C., AKA “Godz Chyld”, recently released a free EP with a title that echoes his current sentiment, “Don’t Sleep On Me”.

G.C. explained to The Real Hip-Hop why he’s “Godz Chyld”, why Tupac Shakur inspired him to pick up the mic, and why people need to stop sleeping on him.

TRHH: Explain the title of your new EP, ‘Don’t Sleep On Me’.

G.C.: I already came out with two projects before this one so I feel like people been sleeping on my music. I got this beat from Jordan River Banks, got on it right away, and that was just how I was feeling that day. I was feeling like I’m putting out this music, people not noticing it, so Im’ma make sure people not sleeping on me no more. This was the song to do it. Once I did that song it made sense to name the whole project that because that’s the mind state I was in when I was making it – making sure nobody is sleeping on me.

TRHH: Why do you feel like people are sleeping on you?

G.C.: I think the biggest thing is promotion. I know I got the talent and the music but the one thing I don’t got is the right promotion. I’m not reaching the people the way I feel like I should be. That’s really what’s holding me back – the exposure and the promotion. The music is there and once people hear my music I usually get a good response. The biggest problem is getting people to press play but once they press play they never regret it.

TRHH: Jordan River Banks produced the title track and another song on the EP, but this isn’t your first time working together. How’d you hook up with Jordan?

G.C.: We hooked up through Sound Cloud. Like I told you, I had projects before and the first project I put out was in 2011 called ‘Book of a Scribe’. I was on God Sendant Music, an independent label. He heard the music that was on there and I already knew him because I’m a big fan of artists like Killah Priest and Hell Razah. They use a lot of his beats on their music so I already knew who he was. I hit him up on Sound Cloud and said, “I love your beats.” He heard my songs and was feeling ‘em. We decided to come up with one or two songs. He sent me two beats and in a week I had it done already and sent it back. He was feeling the song so much that he was like, “Yo, you wanna work on a project?” and I was like, “Hell yeah!” He sent me a couple beats, I worked on it mad fast, and boom, you have the Forever EP. That’s a great project.

G.C.: The first person that made me want to rap period was 2Pac. That was the first rapper that I listened to. Growing up in my house there was only three things that got played, Bob Marley, 2Pac, and Wu-Tang. I grew up on all of that, so all of that made me wanna start rapping. 2Pac’s All Eyez on Me and Me Against the World album’s, once I heard that I wanted to do the same thing. It made me wanna rap and get people to see what I was thinking about. I was real quiet when I was young so I used rap as a way to show people where I was it. I didn’t talk a lot, but as soon as you start rapping people start listening. That’s your opportunity to capture them in that moment so that’s what made me wanna do it.

TRHH: What is it about 2Pac that grabbed you?

G.C.: I think more than anything it was probably his energy. I was probably like 12-years old when I started listening to him so he was talking about a lot of stuff that I wasn’t going through. I wasn’t an adult and going through those situations, so I think it was his energy and his personality. That was around the same time that Tupac: Resurrection came out so I was watching all of that. He was a deep dude and it inspired me to wanna do that.

TRHH: You’re from the Bronx, right?

TRHH: What differentiates a Bronx emcee from an emcee from the other boroughs?

TRHH: Your name G.C. is short for “Godz Chyld”, but I read that you’re not religious. Where does the name come from and why’d you make the change from Wize One?

G.C.: I had so many names, yo. I used to go by “Young Prince” and “Young God” but in 2011 I was on God Sendant and they were telling me I was going to have a problem with those names because people already had them. I just came up with something quick, which was “Wize One” just to get the deal to go through. It wasn’t really a name I was feeling like that, that’s why I ended up changing it anyways. I changed it to Godz Chyld because that’s something I feel like I naturally am. It’s not saying it’s an image I’m trying to put off to people. I literally walk through life feeling like I’m god’s child. To me that doesn’t mean that I’m the most righteous person, everybody and everything is god’s child. The sun and the universe is god’s child because it exists. Everything that exists was created, I was created too, so I’m god’s child. That’s all I am and I don’t gotta be nothing to be that. All I gotta be is myself. I’m pretty much saying I’m being myself but when a lot of people hear that name they expect a certain thing. I didn’t expect people to see it that way because I’m not even thinking the way that they’re thinking. I have to put myself in their place so when they hear that name they’re expecting something and I’m not bringing that so I abbreviated it to “G.C.” so people can wonder what it means and it gives me a way to explain what it means. That way there is no confusion.

G.C.: I’m working on something right now, but what I’m really focusing on is promoting the three projects that I already put out – mainly the one that I just put out ‘cause I feel like that’s a real good project. I feel like it’s a lot of real good songs on there so that’s what I’m focusing on the most. I could work on something new but I already got three projects that people could listen to. If you were to become a new fan right now I got three projects for you to listen to and that’s a lot of music in itself. I’m trying to focus on getting people to hear those. I’m working on something else but I’m just getting started with it right now. I just love making music, but I’m focusing on getting people to stop sleeping on me.

Sherron Shabazz is a freelance writer with an intense passion for Hip-Hop culture. Sherron is your quintessential Hip-Hop snob, seeking to advance the future of the culture while fondly remembering its past.
View all posts by Sherron Shabazz →
This entry was posted in interview and tagged Bronx, Don’t Sleep On Me, download, EP, free, G.C., interview, Washington Heights, Wize One. Bookmark the permalink.