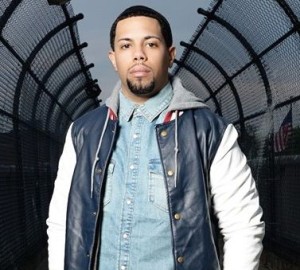 The late great 2Pac famously said, “If you believe, then you can achieve,” and Delaware rapper dFresh echoes that sentiment. Inspired by Earl Nightingale’s self-help album “The Strangest Secret”, dFresh released a free EP titled Universal Laws: Chapter 1. The first installment of a three part series, Universal Laws educates listeners on the power of positive thinking.

Universal Laws: Chapter 1 was successfully funded via Kickstarter and features Damilleo Stacks. The 7-track EP is produced entirely by GxWay.

The Real Hip-Hop spoke to dFresh about his innate optimism, his theories on success, and his new EP, Universal Laws: Chapter 1.

TRHH: Why’d you decide to go the Kickstarter route for your project?

dFresh: Actually it sort of piggybacks on a story from before that. I actually started on Universal Laws several months before the Kickstarter even happened, almost a half a year. I have my own personal space where I record all my music. I went to school for sound so I learned a little bit about setting studios up. I set up a small set up of my own and it actually got broken into. All the equipment got robbed out of it.

dFresh: Yeah, it was pretty bad. I had about four songs for the Universal Laws and I lost everything. I ended up losing countless amounts of other material that I was working on. I had that equipment for 6-7-8 years, close to my whole career in Boston. The Universal Laws felt so strong to me that I had to keep it going. I had to make it one way or another. Besides that I had to get back on my feet. I wasn’t about to stop. The dude that did the video for Universal Laws spearheaded and partnered up with me to help with the Kickstarter. That’s where all that stems from.

TRHH: Explain the title of the project, ‘Universal Laws’.

dFresh: It’s not made up word or anything like that. A lot of people talk about it. It’s hard to describe it without using the words. It’s pretty much laws that are fairly universal. Laws that different religions, cultures, and ethnicities talk about like prosperity and trying to use your mind to do what you want. It’s universal so the tools can be used negatively and positively. It’s up to you to decide how you wanna use it. It’s certainly talked about in religion and other people use it for prosperity and stuff. It’s something that applied to me. Besides the instance that happened with the robbery, beforehand I really felt it. I listened to the speech “The Strangest Secret” by Earl Nightingale on my 25th birthday about three years ago. Honestly when I heard it I didn’t even know what to do with it at first. After really listening to it a couple of times it motivated me. Because I make music I felt I had to be a vessel for it to get the word to other people. I felt it was so empowering to me that I would hope that other people could benefit from it as well. Part of what he was talking about was laws of the universe. That’s where the name and title came from.

TRHH: What about it was empowering to you?

dFresh: The fact that I personally felt that I was embodying some of what he was saying already. I felt as though I was reaping the benefits of some of what he was saying without consciously knowing what it was. My mother is a very positive person so I got a solid foundation of the glass is half full theory. I’ve always been someone that was positive. I felt like when Earl Nightingale was doing his speech I almost wasn’t hearing anything new. I felt like everything I heard was said to me in a different way one way or another. So if I’m already reaping these benefits from me living like this and me trying to live like this, what’s more self-empowering than knowing that you’ve already been living by it? I came from Delaware, I have no family in Massachusetts. I came up to go to school and I’ve been building off of that. You know about me losing my equipment and there has been other extremes that have happened while I was in school that I talk about on Universal Laws. There is always going to be some type of obstacle. Even with my stuff being taken I was still trying to do that and with me trying to do that I’m already reaping the benefits. There is nothing more self-empowering. I feel like a lot of other people might have been the same way even if it’s not 100% of their life — at one point in their life. That’s some of the stuff that will motivate you, knowing that you can do it and you’ve already been doing it.

TRHH: Tell me about the single, ‘The Strangest Secret’.

dFresh: Well the Universal Laws project itself will be a series. When you listen to the whole series through you’ll get the entire Earl Nightingale speech – well, you’ll get paraphrases of a large majority of the speech. It’s a half hour speech. Theoretically you’ll be able to listen to the whole speech all the way through. The Strangest Secret is really just to open it up. It’s to start it off. The song titles will have different reasons for their names. The first universal thing is the title, The Strangest Secret, it’s the opener.

dFresh: It’s phenomenal really. Me and him actually have our own personal relationship. He and I went to school together. When I started he was one of the people that I met the first year I was there. We pretty much built a relationship from there. We really didn’t know each other from a can of paint. He was actually doing graphic design, he wasn’t even doing audio. Our school wasn’t a predominantly black school. It was a Rock & Roll type school. One of the main genres a lot of people did was Rock & Roll so you end up gravitating to a lot of the Hip-Hop heads. Everyone also doesn’t live in the dorms. Me and him lived in the dorms so we’d see each other and say what’s up. I’m the type of person that’s more outgoing when I need to get to know people. I didn’t even know he made beats. One day I was walking by his dorm room and heard some beats. I’m a performer so when I heard the beats I didn’t even knock, I just opened the door and started spittin’ something. We just hit it off and started doing tracks. He went different places but we always found a way to bring it back. We’ve been working on this project for the past 2-3 years and it’s almost like it’s back to normal how we always used to work.

TRHH: You said that you wanted to make this project more east coast, what does that mean?

dFresh: I wanted to have a little more of a boom bap-ish type feel. That was a good vessel for me to do some solid conscious rap. I think greats like Talib Kweli and Mos Def are really good at doing conscious stuff on east coast beats. I have a song on there that’s a little more south. GxWay makes the beats and I give ideas on formats. He brings the pain on the beats. It’s the last song on the project and it’s sort of southern but it has a Wu-Tang type element to it.

dFresh: I wanna say my peers but just like when you asked about working with GxWay, there are compound stories underneath that. In my teenage years my friends were freestyling on radio. I’m mulatto, and on the white side of my family there are a handful of musicians. No one is famous in any way, shape, or form but they’re people that like to play music. My mom has 5 brothers and each one of them did something musically. One that didn’t do something musically did something technically with sound. It sort of in a way been in me. I remember as a kid me loving just to listen to music. Sometimes it wasn’t necessarily Hip-Hop, but I just loved to listen to music. I’d sing my own jingles to songs. When I was ten years old my father passed away from cancer and part of the way for me to deal with it was to vent through me writing a rap. I didn’t necessarily have to talk about him but I had to get out that emotion.

Honestly I never told anyone for 4-5 years. I showed a few of my friends my raps but it wasn’t anything crazy. When I was ten I felt that even if nothing came from me rapping, just me doing something musical and getting in the motion, even if a few people liked it, it wasn’t enough for me to not stop. It was free at the time, I was just rapping in my room so I didn’t see any harm in it. When I got to middle school to high school I heard a lot of the surrounding rappers in Delaware. A lot of Philly rappers were influential. Roc-A-Fella had a lot of artists at the time. Going to battles and listening to DJ Kay Slay influenced me. I can’t say my whole style is based off that but I can safely say there have been phases where I listened to that music enough and you sort of embody what you listen to. I’m not sure where I can safely say when somebody inspired me to rap but there were enough underlying influences — relative and environmental.

TRHH: What are your goals in the music business?

dFresh: I can’t put my finger on it but it’s a very weird fickle thing. If I set a goal to sell a million records and I don’t sell a million records am I a failure in the music industry? “I want to make sure I work with Jay-Z,” but if I don’t work with that person does that make me a failure? I feel like there are a lot of different avenues of success. I will say that I’m not trying to be mediocre. I’m trying to go 100% and then redefine what 100% is. I’m definitely trying to go as hard as possible. I don’t want to get caught up in “This is what I have to do,” or “I have to win this amount of Grammys,” because there have been plenty of greats that didn’t win Grammys. Does a Grammy determine your success? I can’t put a label on something that has so many different avenues of success. You can still be successful even if you only inspire someone to be the greatest. I don’t try to set too many goals but to make a living, clothe myself, and feed myself. I’m going to try to do the best I can but at the bare minimum if at least I can do that in some way, shape, or form I’m going to feel pretty good about it.

Sherron Shabazz is a freelance writer with an intense passion for Hip-Hop culture. Sherron is your quintessential Hip-Hop snob, seeking to advance the future of the culture while fondly remembering its past.
View all posts by Sherron Shabazz →
This entry was posted in interview and tagged Delaware, dFresh, DxWay, Earl Nightingale, EP, free, interview, Kickstarter, The Strangest Secret, Universal Laws: Chapter 1. Bookmark the permalink.