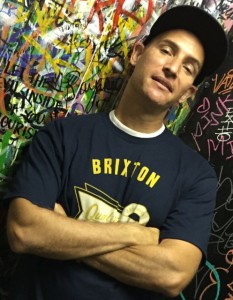 A Whole New Cook is produced entirely by Evidence and features appearances by Madchild, DJ Babu, LMNO, DJ Romes, and Evidence himself.

The Real Hip-Hop spoke to CookBook about what it was like working with Evidence, the current status of his group L.A. Symphony, and his new album, A Whole New Cook.

TRHH: How did you and Evidence come together to work on this project?

CookBook: I’ve known Evidence for a long time. He’s been a friend of mine for a while. You meet in the scene and kind of come across each other. I’ve worked with him a couple times over the years. This is the third installment of an EP series that I’ve been doing where I work with one producer and let their production style and beats draw something different out of me. I was rhyming over a lot of my old beats so I wanted to do something new and work with a lot of these people that I’ve developed relationships with in the industry over the years. The first one I did with Rhettmatic and the second one I did with Blu. I’d known Ev for a long time and thought it would be really dope to work with him. I talked to him and he was with it. Between our crazy schedules we figured out a time, got in, and knocked it out.

TRHH: What’s the meaning behind the title “A Whole New Cook”?

CookBook: For me the EP series has been sort of transformative in that it started in a time in my life when I started to do new things musically, artistically, my philosophies, and in my personal life. My life was changing. I think that is the culmination of me totally cutting loose and feeling like I’m 100% doing music the way I want to do it and not having to worry about anything. The title was saying just that, it’s a whole new Cook. Not that I wasn’t authentic before, but I feel like my full self. I’m totally cutting loose now and letting it all hang out. To me that was a new thing, plus the track. Before I worked with Ev I always liked the quote from his song where he says, “I’m a whole new cook,” and I thought it would be a dope thing for a song. I told him about that and he was like, “Yo, that would be dope.” Once we made the actual title track we both kind of looked at each other and thought it was the track for that quote. It all worked out perfect and came together.

TRHH: How is this project different from YES and Phantom Menace?

CookBook: On Phantom Menace Rhettmatic’s beats were definitely darker than what I’d usually rhyme over. They drew more of a new aspect out of me which was cool. YES was a little more my style. It was different, but a little more what I normally do – light hearted and having fun. A Whole New Cook stylistically is different because Ev’s beats are darker, slower, and a little more stripped down. He told me from the beginning, “Look, my beats expose emcees. They’re usually slower and stripped down. It’s not a lot of extras. It displays your rhymes really well, so get ready to rhyme and kill it.” Also Ev’s production style makes it different, too. He’s an excellent actual producer where he produces the vocals. He does a full producers job. That was one of the bigger differences too. I’ve never really been produced like that. I’ve had people work with me lyrically but Ev is a producer through and through, he’s not just a beat maker. He said, “You’re not gonna write these raps at your house. Come to my studio.” With most of the songs he made the beat as I walked in the door or he was making the beat while I was in the back freestlying or writing ideas down. We’d develop songs together like that. It was a really interesting process. By making it in a way that I’ve never made a record before it made a huge difference in the outcome as well.

TRHH: The song “CookBook Got the Answers” was dope. Who came up with the concept for that one?

CookBook: That was all Ev. When I heard the track I loved it. He said, “This track reminds me of when you go to a radio station and they always want you to spit a verse. This reminds me of those type of beats that they would put on.” I wrote the rhymes and spit ‘em and he was like, “It would be dope if we made it sound like a skit and make it like you were on Sway in the Morning.” I was down. We went through a bunch of Sway in the Morning audio and found where he said “cook” and “book” in two different places and put them together. That was kind of the running joke that it doesn’t sound totally natural. A lot of people were like, “Yo, were you on Sway in the Morning?” nah, I wasn’t [laughs]. It was a lot of fun doing that. Ev had that idea and we went with it.

TRHH: Do you know if Sway has heard it?

CookBook: I don’t think he’s heard it yet. I have a feeling he’s gonna. Hopefully he loves it and is not like, “Hey yo, what the hell, man?” [laughs].

TRHH: What’s your opinion on the recent resurgence of west coast Hip-Hop?

CookBook: Ah man, I’m from L.A., I love it. On the upper top scale you’ve got Kendrick killing it. With Dre’s album coming out last year you have Anderson .Paak. There are a lot of artists from every level from quote unquote underground to mainstream coming out. I think it’s great. Everything goes in cycles and music is the same way. Eventually the pendulum is going to turn a little back towards us. I think it’s a little different this time because there is a little more unity in a sense that people rhyme over similar beats so there is a similar threads. You can have a lot of west coast artists still getting down with east coast or dirty south artists or whatever. There is a resurgence but there still is a lot coming out of different camps too and I love it – all of it.

CookBook: We never really broke up. I think we came to a point where we were just kind of done. We just gave each other a break because we were going really hard and strong for a long time. It just became a little bit of a pressure situation. We just said, “Everybody do your thing,” and we were on hiatus or whatever you wanna call it. We always said we’d do another record whenever we feel it. In 2014 we felt it. We did a new record and put it out in December of 2014. We’re in such different places in our lives and careers that it wasn’t one of those things were you put together a record and do a big tour and have this huge resurgence. We kind of did the record for us and the fans who were still around really enjoyed the record. It’s a really good record. It was something that we wanted to do and we enjoyed doing it. We get booked for shows so if we get booked for a show we’ll go do it. Other than that we’re not actively pursuing any kind of shows, tours, or new music right now. We’re all still homies by the way. We’re super close. Those are my brothers.

TRHH: What’s the next chapter in CookBook’s book?

CookBook: Man that is a great question. First of all, I’m really excited about A Whole New Cook. I’m really excited about the possibility of things that are coming at me right now. I want to see where this takes me. I had thought loosely that this EP series was just going to be a three-parter. I’ve had so much fun doing it that even in the midst of me making a regular album again I may always do an EP with a producer in this format because I’ve enjoyed it so much. I don’t have exact plans. It’s funny, now that this project is out I’m starting to formulate a pseudo-list of producers I’d like to work with. There are no concrete plans. I’m going to be doing a lot of shows and some touring. There are a number of videos that are coming out from this project and I’m just going to pump this project up as much as I can and keep making it be as successful as possible. That’s my focus and goal right now – A Whole New Cook.

Sherron Shabazz is a freelance writer with an intense passion for Hip-Hop culture. Sherron is your quintessential Hip-Hop snob, seeking to advance the future of the culture while fondly remembering its past.
View all posts by Sherron Shabazz →
This entry was posted in interview and tagged A Whole New Cook, California, CookBook, CookBook Got the Answers, Evidence, interview, L.A. Symphony, Los Angeles, Phantom Menace, YES. Bookmark the permalink.