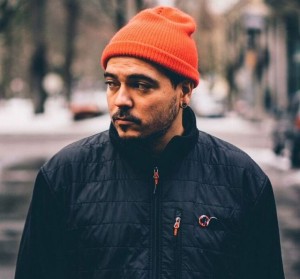 Onry Ozzborn is no stranger to collaborating. In his 19 year career the Seattle native has been a part of many groups including Grayskul, Oldominion, The Gigantics, and Dark Time Sunshine. Ozzborn’s latest project carries on his tradition of collaborating. Appropriately titled “DUO” Onry Ozzborn’s new album is in the same vein as Scarface’s “My Homies” series where Onry invites his friends to rock with him on each track.

The Real Hip-Hop spoke to Onry Ozzborn about his new album DUO, its accompanying film project, his favorite song on the album, and the possibility of a new Grayskul project.

TRHH: Did you purposely set out to record an album with all guest appearances?

Onry Ozzborn: No, I didn’t. I actually started the album over five years ago. I was randomly recording music. I didn’t have a concept or a title or anything. I was randomly dropping verses on different instrumentals and whatnot. On a couple of songs I heard certain people’s voices and styles to it so I reached out to some people. As it progressed it just kind of evolved into that. I decided to have a guest on each song and do a duet album with all my friends. That’s why it’s called DUO.

TRHH: Because they’re all your friends was it easier to get features?

Onry Ozzborn: Oh, definitely. Almost everybody I worked with are friends of mine over the years from touring. I never try to force anything. I let the song tell me what should go on it and what shouldn’t. I just let it take its course and reached out to friends of mine. It was smooth sailing.

TRHH: Tell me about the film that accompanies the album.

Onry Ozzborn: The film is the entire album shrunk down into a thirteen and a half minute visual. It’s a medley of the entire album, but it sounds like one song. I was able to get everybody that’s on the album in the film.

TRHH: Oh wow. What was the filming process like?

Onry Ozzborn: It was phenomenal. It was a good time, man, being able to have all the artists for the most part in one place. The people that live out of town and couldn’t make it sent footage in and we were able to implement it into the film in a very unique way. Once you see the film you’ll understand. It’s a R2D2 type thing. The movie is the visual version of the album.

TRHH: My favorite song on the album is “Burn” with Theory Hazit. How did that song come together?

Onry Ozzborn: I just heard him on it. I’ve never worked with him before but we’re friends. When I heard the beat I knew Theory would kill it. I went ahead and dropped the whole thing. I did the Burn thing, he heard it and felt it and did the same thing. I didn’t think it needed a hook, I just wanted some raw spit on there.

Onry Ozzborn: Yeah, my favorite song is “Wired” with Asphate from Maxilla Blue. It’s pretty unique sounding to me. I haven’t heard a song like that. His verse was phenomenal to me. Everybody killed it but I haven’t heard a verse like that since early Pharoahe Monch.

Onry Ozzborn: That’s not even in the works. I’m working on this, a new Dark Time Sunshine after that, and JFK is working on a solo album so it’s going to be a while.

TRHH: What can fans expect to hear when they buy DUO?

Onry Ozzborn: Just a variety of a lot of different types of music – a lot of mood swings. There are like 23 different people on the album so you won’t get bored. It’s put together very cohesively though, it’s not like a compilation or just some songs thrown together. It’s real organic throughout the whole thing. It’s only a 51 minute listen so it’s not that long.

Sherron Shabazz is a freelance writer with an intense passion for Hip-Hop culture. Sherron is your quintessential Hip-Hop snob, seeking to advance the future of the culture while fondly remembering its past.
View all posts by Sherron Shabazz →
This entry was posted in interview and tagged Burn, Dark Time Sunshine, DUO, Fake Four Inc., Grayskul, interview, Oldominion, Onry Ozzborn, Seattle, Ted Records, The Gigantics, Washington, Wired. Bookmark the permalink.